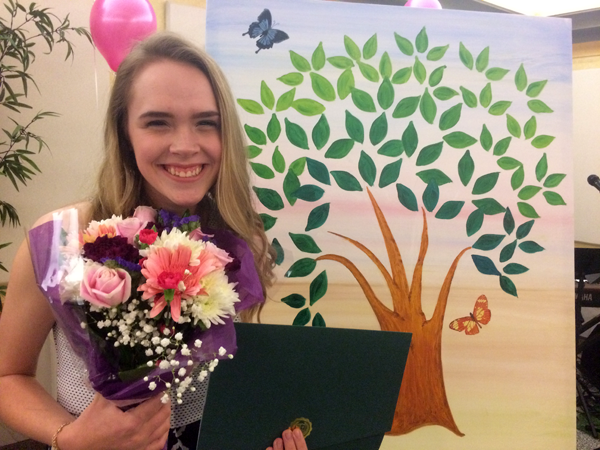 by jmaloni
Fri, Jul 21st 2017 08:35 am
Niagara Falls High School seniors Kaitlyn Ivancic and Jeante Fitzsimmons were named the 2017 recipients of the Theresa Elizabeth Insana Memorial Scholarship. They were honored at a dinner Thursday at The Como Restaurant on Pine Avenue.
Ivancic has been a class officer, a member of the National Honor Society, and participated in the drama club and the All-County chorus. She has been an active member in her church and, as a result, founded the Anchored Bible Club, which has a purpose to connect others in relationships, serve the school and community, and grow in the gospel. Her "Serve Projects" include the Magdalene Project and the Summit Life Outreach Center.
Kaitlyn plans on pursuing a degree in social work from Roberts Wesleyan College and studying in Uganda for a year. She said she hopes to be able to start a program to help the children of Uganda who are victims of abuse and human trafficking.
Jeante was also awarded a scholarship, but unable to attend due to a prior leadership camp commitment. She is a member of the National Honor Society and the STEM program. She was a member of the soccer, basketball and track teams, and has done extensive volunteer work with many local charities, including AIDS Walk, Gay Pride, Renaissance Center, Boys and Girls Clubs and Evergreen Health.
Jeante was chosen to participate in the Tim Hortons Youth Leadership Program and was the recipient of the Presidential Education Award. She plans on attending the State University of New York at Fredonia to pursue a degree in engineering, and said she hopes to be an inspiration to young women to strive through difficulties and pursue their dreams.
The Theresa Elizabeth Insana Memorial Scholarship was first awarded in 2005 following Insana's untimely death. Each year, two Niagara Falls High School graduating seniors are awarded a scholarship in her memory.
Theresa's father, Joseph, and her uncle, Tom, presented the awards.
Categories
NFP School feature