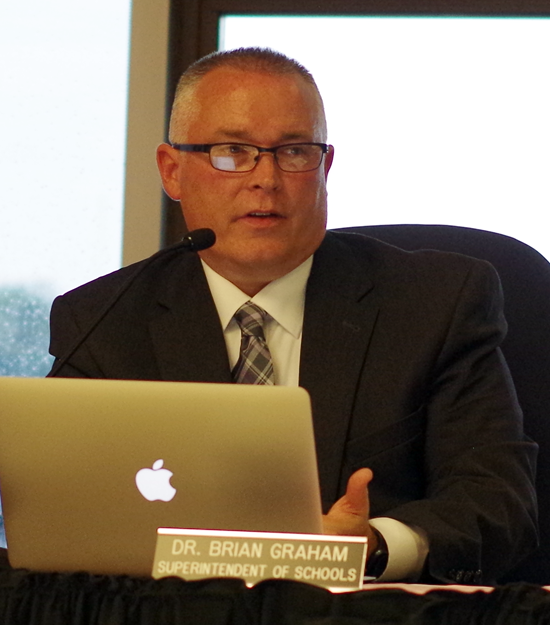 Superintendent of School Dr. Brian Graham's three-year contract was extended one year by the Board of Education Monday. (Photo by Larry Austin)

Grand Island Board of Education: Pyc, Tomkins returned as board president, vice president

Sat, Jul 15th 2017 07:00 am
School superintendent contract extended one year
By Larry Austin
Island Dispatch Editor
The 2017-18 school year for the Grand Island Central School District officially began Monday with the reorganization meeting of the school board.
In two 5-0 votes (with trustees Rich D'Agostino and Glenn Bobeck not present), the Board of Education re-elected Lisa Pyc president and Donna Tomkins vice president for the new school year.
During the regular meeting that followed, the board voted 5-0 to extend by one year the contract of Dr. Brian Graham, superintendent of schools. Graham just completed his first of a three-year contract. He's under contract now until 2020.
In thanking the board for the extension, Graham said he was "very blessed to be working here. ... It's a great school district and we're really moving toward becoming a championship school district in multiple areas."
"When I talk about a championship school district, I'm talking about viewing the district from different lenses," he said. "It could be through transportation, it could be through academics, it could be through the fine arts, it could be special education services, and so on and so forth."
To fill vacant positions in the district, the board made several appointments.
Trustees appointed Kari Campas as a probationary reading teacher at Sidway Elementary School, replacing Antoinette DiBellonia, who resigned. The board appointed Ryan Donnelly as a social studies teacher in the high school, replacing Mike Dedario, who resigned. The board appointed Stephanie Kwiatkowski to a special education position at Kaegebein Elementary School.
Categories
Dispatch Dispatch feature NFP