Fri, Jul 14th 2017 04:10 pm
By Larry Austin
Island Dispatch Editor
The consultants charged by the Town of Grand Island Council to conduct a feasibility study for a possible community center on the Island will hold a community input meeting Tuesday, July 18.
A flier produced by consultants Clark Patterson Lee was posted on the Town of Grand Island Facebook page Wednesday night to announce the meeting. This is one of the first community outreach meetings concerning the community center, proposed by Town Supervisor Nathan McMurray.
The flier says: "Help us plan your new community center."
And, "The Town of Grand Island is planning a new community center and as residents, your input is important. This public meeting will be an opportunity to let us know what you want!"
The meeting will take place from 6 to 8 p.m. in the Grand Viking Theater of Grand Island High School, 1100 Ransom Road.
Deputy Town Supervisor Jim Sharpe said, "We're not wading in with any preconception" of a community center. Wednesday night, the consultants conducted an informational meeting with the town's Long Range Planning Committee, which Sharpe chairs.
"This was given to us last night at the Long Range (Planning Committee) meeting," said Councilwoman Bev Kinney of the flier in an email to the Dispatch Thursday. "We were put through our first exercise for the community center to prepare us for the meeting. Clark Patterson Lee knows it is short notice, but wanted to get the process moving ASAP as the board requested of them, when it was decided to have them do the study."
"I was also told last night that Clark Patterson Lee will be reaching out to all board members individually, to discuss the community center in the next week," Kinney said.
She said the first meeting is designed to get information from the public about what they want in a community center.
"There will be an informational presentation on what the process is, then we will break up into small groups," she said. "They will be putting together their wish list."
Kinney said a tentative meeting is set for the high school to discuss the town's master plan on Aug. 9 at 6 p.m.
Learman reappointed
After giving Doug Learman a certificate of appreciation upon his retirement from the town's code enforcement office, the Town Board Monday at its regular meeting appointed him to a seasonal job effective July 11 at $33.52 per hour for a maximum of six months. McMurray explained that the town will have Learman on the job to work on ongoing projects with which he is familiar while the town searches for his replacement. 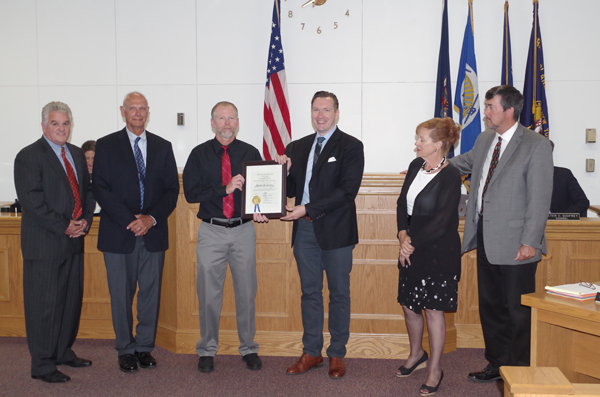 Retiring after 30 years of service to the town, Doug Learman was given a certificate of appreciation at Monday's Grand Island Town Board meeting. Pictured, from left, are councilmen Chris Aronica and Ray Billica, Learman, Town Supervisor Nathan McMurray, and councilmembers Bev Kinney and Mike Madigan. (Photo by Larry Austin)
Categories
Dispatch NFP