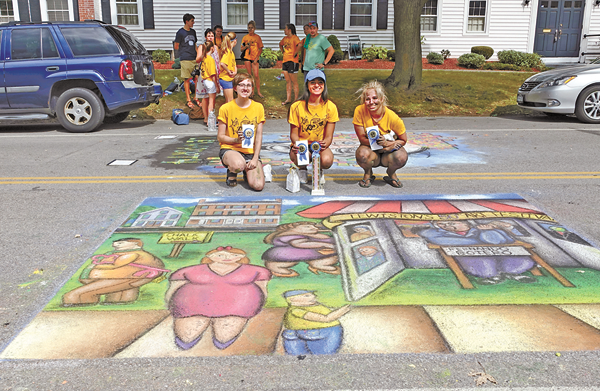 Mon, Jul 3rd 2017 07:00 am
The Lewiston Council on the Arts recently announced its 2017 event schedule.
"We are very proud to celebrate 51 years of art in Lewiston. Our programs have served as a model to other communities, of what is possible when we invest in the arts. The dividends are community, where people want to live, work and congregate," said Executive Director Irene Rykaszewski.
•From 10 a.m. to 5 p.m. Saturday and Sunday, July 8-9, the LCA welcomes Sarah Winter of Chainsaw Chix to Olde Sanborn Days. This free event will take place at the Sanborn Fire Co. on Route 429 in Sanborn.
During her weekend residency, Winter will create pieces right in front of the audience.
The old-fashioned country fair and craft show also boasts plenty of activities and demonstrations for the entire family. Olde Sanborn Days is presented in partnership with the Rotary Club of Niagara County Central.
•The recipient of Blues Beat Magazine's prestigious "Muddy" Award, "Blue Mondays" returns to the Hennepin Park Gazebo for a 23rd year of blues music courtesy of top WNY acts. From 7-9 p.m., guests can enjoy a unique, laidback evening of music.
Entertainment includes:
The free concerts are held at the corner of Center and North Fourth streets in Lewiston. They are sponsored by Elderwood of Wheatfield and the Niagara Falls Bridge Commission.
•A third season of "Bluegrass Mondays" concerts follow. Bring your festival chairs to the gazebo and enjoy bluegrass played by regional bands including:
These free concerts are also held in the gazebo.
•At 6 p.m. Friday, July 14, step back in time with the "Summer of '69." This free event will feature Lewiston's favorite 1960's rock musicians reuniting at the gazebo for an evening of classic rock songs from the '60s, '70s and '80s. Featured artists include the Lewiston All Stars, Loved Ones, the County Orphanage, the Invaders and Grammy Award winner Gary Baker.
This event is sponsored by Sevenson Environmental Services and Modern Corporation.
•The highlight of the year is the 51st annual Lewiston Art Festival, which will feature work by more than 175 artists and crafters the weekend of Aug. 12-13.
From 10 a.m. to 6 p.m. each day, Center Street will be filled, yes, with people, but also with some of the top artists in the region and the country.
During this free event, guests will have the chance to meet the artists one-on-one; view, enjoy and buy more than 20,000 original works of art, including paintings, sculpture, ceramics, jewelry, fiber, glass, wood, mixed media and photography; take a peek at the next generation of creative makers at College Alley, which boasts student artwork; make their own art at the "Make & Take Workshops," sponsored by the Lewiston Public Library; listen to music and watch street performers; take part in various workshops and demonstrations; and sample food from a host of vendors, as well as Lewiston's own eateries.
From noon until 4 p.m. Saturday, the 33rd annual KeyBank Chalk Walk Competition will be located at Center and Fifth streets. Teams of student artists from Western New York high schools will create murals and compete for cash awards and trophies. "Arts are Key" prizes will be awarded for first, second and third place, and a People's Choice Award will be determined by audience vote.
This year's theme is "Interconnectedness."
The Art Festival is sponsored by the Niagara Falls Bridge Commission, Modern Recycling, Niagara County and Tin Pan Alley. The Chalk Walk is sponsored by KeyBank and Mount St. Mary's Hospital.
•Celebrate the heritage and honor the cultural diversity of Western New York with two days of international music in the Peace Garden, located between the historic Frontier House and the LCA offices on Ridge Street.
The event will be presented in conjunction with the Lewiston Harvest Festival, which is presented by the Niagara River Region Chamber of Commerce.
This event has no admission charge and is open to the public. It runs from noon until 4 p.m. the weekend of Sept. 23-24.
•Once fall arrives, it brings with it the popular Marble Orchard Ghost Walks. Guests can hear local ghost stories and myths, as well as tales of tragedy, crime, murder and mystery.
Tours are presented at 7 p.m. each and every Saturday in September and October. Step back in time with this historical and educational tour, as theatrical guides lead the way through the historic section of the village and into the cemetery. Discover more about the eerie, fun-filled past, and take an adventure across the grounds (while learning graveyard etiquette).
These tours are rain or shine and begin at 476 Center St. Admission is $15 for adults, $12 for LCA members and $6 for children under the age of 12.
LCA events are sponsored by New York State Council on the Arts with the support of Gov. Andrew Cuomo and the New York State Legislature, with a Decentralization Grant administered through Arts Services Initiative; the Chamber of Commerce, Lewiston Music and the Lewiston/Niagara on the Lake Rotary Club.
For more information, visit www.artcouncil.org.
Categories
Home feature NFP Sentinel Sentinel feature Sentinel HP Feature List