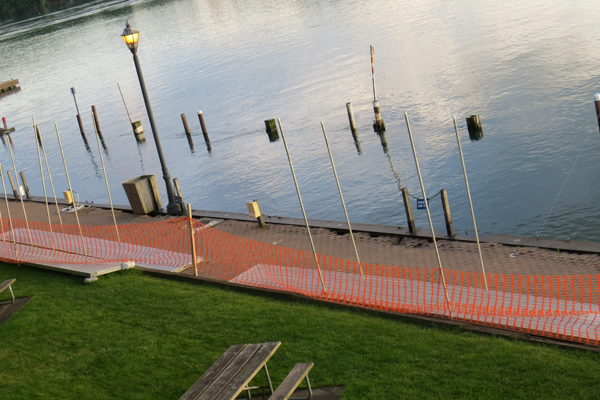 Docks in the Village of Lewiston are closed and fenced off in order to protect residents, visitors and boaters from injury. Both here and in Youngstown, water levels at a 100-year high have engulfed boat slip areas. (Photos by Joshua Maloni)

Village of Lewiston waterfront not improving, but jet boats operating as licensed

by jmaloni
Sat, Jun 3rd 2017 07:00 am
Water levels nearly 3 feet above average
By Joshua Maloni
Managing Editor
With Lake Ontario water levels still adversely impacting the Village of Lewiston waterfront, the Board of Trustees invited BMC Adam A. Pedzich to Wednesday's special, fiscal year-end meeting. Pedzich is officer in charge at the U.S. Coast Guard Station Niagara.
"We've got erosion problems, as you're aware of, and we also have problems with the jet boats," Mayor Terry Collesano said.
"We do have problems, and we're just wondering if you could update us a little bit," he added.
Pedzich said, "I know some of the concerns. I've talked to some of you on the phone a couple times. Some of my officers have, too."
"The issue I think we're dealing with is erosion, because of the high water," he explained. "And I know people are concerned about the jet boats, and the wake that they're throwing."
Though the village docks are closed, and the pier is fenced off, both Whirlpool Jet Boat Tours (operating from Water Street) and Niagara Jet Adventures (operating from Youngstown and traversing past Lewiston) are open for business.
Pedzich said, "I know a lot of people have called and are asking for us to go stop the jet boats from throwing the wake. I can only enforce the law as it's written, either a code of federal regulation or another law. There's no (federal) law right now that they're violating - that I can enforce regularly. There's no speed zone. It's not something that the Coast Guard can enforce. ... There's no 'No Wake Zone'; there's no federal ticket I can write for a wake."
What's more, Pedzich said: "I know some people will disagree, but the way they're operating - they're inspected every year - and operating in a way that they're licensed to operate. I know that's a disagreement with maybe some of the people in here (at the meeting), but they are operating in the way that they're licensed. They're operating in compliance.
"And how do we know that? Because we watch them around the water, and also we have investigators - both plain clothes and in uniform, too - that watch them and that (travel) with them.
"What we've done a couple times, and I know Niagara County has (done), is we've talked to Youngstown, to the Niagara Jet Adventures, because they operate on our side, and asked them to slow down."
Pedzich said jet boat operators can simply enter Canadian waters and "we won't have any enforcement authority, even if we did have any."
In mid-May, WJBT provided the Village of Lewiston with an indemnification "hold harmless" agreement. The letter stated Niagara Gorge Jet Boating Ltd. (WJBT), "holds harmless the Village of Lewiston from any and all claims" that might be made against the village arising "out of (WJBT's) use of the docks and adjacent waterfront where the commercial slips and public docks are located" in the village.
Operator John Kinney attended the regular board meeting in May to discuss the situation with trustees and residents.
Collesano said Niagara Jet Adventures was invited to attend the meeting this week, but no one showed up.
Pedzich said both jet boat companies are traveling on their Coast Guard-approved routes.
Jet boat operations will be impacted by Gov. Andrew Cuomo's decision to expand state regulations pertaining to the high water levels.
Department of Public Works Superintendent Terry Brolinski said the state, "as per governor's order, put a sign down on the sand docks. 'No Wake Zone, 600 Feet' from the shoreline, and it does have '5 Miles Per Hour' written on it."
On Tuesday, more orange fencing was installed above the village docks, and the electronic sign was placed on the north corner, just past the boat launch site. 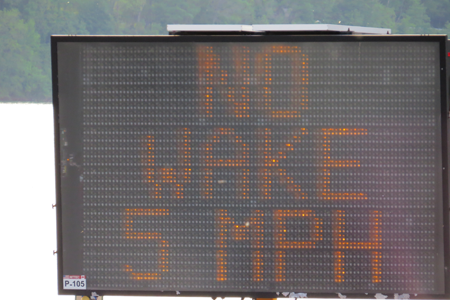 A digital sign posting the boating speed limit was installed this week at the Village of Lewiston waterfront.
A press release on Cuomo's website states, "The governor ... directed the New York State Office of Parks, Recreation and Historic Preservation to implement a 5-mile-per-hour speed limit to control wakes within 600 feet of Lake Ontario and the St. Lawrence River shoreline as part of the state's ongoing response to coastal flooding in the region. Vessels operating within 600 feet of shore must observe a 5-mile-per-hour speed limit to reduce impacts to shoreline residences and infrastructure caused by wave action and to promote safe boating.
"Under normal conditions, boaters are required to obey the 5-mile-per-hour speed limit within 100 feet of shore. With the current state of emergency in the region, and as water levels continue to rise throughout the Lake Ontario and St. Lawrence River system, the governor directed State Parks to institute the expanded speed restriction.
"... Waves created by boat wakes can exacerbate shoreline erosion, further threatening residential and municipal infrastructure. Reducing speeds will result in reduced boat wakes and lessen the wave action along the shore. Reduced speeds are also necessary to ensure safe boating, as many hidden hazards and debris have been covered by elevated water levels and can threaten boaters."
Brolinski asked Pedzich to point him in the direction of enforcing agencies. Pedzich said the Niagara County Sheriff's Office Marine Division and the New York State Department of Environmental Conservation have the power to discipline boaters violating the governor's order.
Moreover, Deputy Mayor Bruce Sutherland said residents and Lewiston Police Department officers can take down the name and/or number of boats observed acting outside of the order, and report those boaters to the mayor's office.
"We can revoke clearance to launch at our dock," he said.
"The harbormaster could also watch them and, if he sees the wakes doing what (Brolinski) just talked about (having observed a fisherman boating outside the regulations), issue them a warning. And then the next time that it happens, they can't launch here anymore."
In addition, Pedzich said boaters causing disruptive and harmful wake can be subject to civil action.
"As an operator, you are responsible for wake that you throw," he said.
Pedzich said his station in Youngstown is 75 percent under water.
He said he's recently received reports stating the water level will remain high until mid-June, at which point it's expected to begin receding.
On May 26, the International Lake Ontario-St. Lawrence River Board issued a media release that stated, in part, "Months of high precipitation produced the highest recorded waters level on Lake Ontario since reliable records began in 1918. The level was stable for several days as a result of drier weather and increased outflows, and barring significant additional rainfall, the Lake Ontario level may have halted its rapid rise. The board has been maximizing the outflows from Lake Ontario, and has been balancing water levels upstream and downstream to minimize flood and erosion impacts to the extent possible. ...
"Lake Ontario outflows have now reached 10,200 (cubic meters per second). These extremely high outflows are now impacting navigation conditions in the St. Lawrence Seaway between the Thousand Islands and Massena. ... With these higher flows, the board also had to consider not only maximizing relief on riparians upstream and downstream, but to also consider the impacts on the commercial shipping industry. To assist the board, the Seaway agencies have adopted mitigation measures to ensure the safety of ships transiting this section of the St. Lawrence River. ...
"The board continues to provide maximum relief to shoreline communities while also attempting to a lesser extent to maintain the Seaway's safe operations. If weather conditions remain as expected, the board will continue to release an outflow of 10,200 (cubic meters per second), a flow equivalent to the record maximum weekly flows passed in 1993 and 1998, for several weeks in an effort to reduce the high level of Lake Ontario as quickly and safely as possible.
"If the drier conditions of the past weeks continue across the Lake Ontario-St. Lawrence River basin, Lake Ontario outflows are expected to soon surpass inflows, at which time Lake Ontario's water level will begin to decline. However, owing to the huge surface area and large volume of water on Lake Ontario, it will take several weeks to significantly reduce levels, and longer to return to more average water level conditions. The board therefore advises continued caution and preparedness for sustained high water levels in the weeks to come."
The media release noted that, on May 25, Lake Ontario was 248.95 feet, 33.1 inches above its long-term average level for this time of year.
By definition, "The International Lake Ontario-St. Lawrence River Board specifies the outflows from Lake Ontario, according to Plan 2014 as required in the 2016 Supplementary Order from the International Joint Commission. This plan was agreed to by the United States and Canada in December 2016 in an effort to improve environmental performance while maintaining most of the benefits provided to other interests by the previous Plan 1958-D, which was in use since 1963."
Village of Lewiston docks are closed until further notice. In coming weeks, the board will work with engineering firm Nussbaumer & Clarke Inc. to determine the shoreline and dock damage, a plan for repairs, and the possibility of reopening this summer.
The boat launch and fishing areas are open.
Categories
Home feature NFP Sentinel