Shown is a scene from a previous "Come Fly a Kite for Homeless Veterans" event at Gratwick Riverside Park.

Fri, Jun 2nd 2017 03:40 pm
By Lauren Zaepfel
Tribune Editor
Colorful kites will soar along the Niagara River during the fifth annual "Come Fly a Kite for Homeless Veterans" event, which is set to take place from noon to 4 p.m. Saturday, June 3, at Gratwick Riverside Park.
Proceeds from the event will benefit organizations that provide assistance and services to veterans in need, including VA Health Care, Veterans One-Stop Center of Western New York, Vets H.E.R.D. and the WNY Veterans Housing Coalition.
Jack Michel, founder and chairman of the "Come Fly a Kite for Homeless Veterans," said he came up with the idea of flying kites during the event after he remembered a trip he took with his wife to Bermuda on a holiday where "everybody flies kites."
"I mean, the whole island is just a mass of kites," he said.
That's when he thought to hold an event where community members can fly kites together.
"Nobody else is doing anything like that," he said.
The overall goal of the event is to raise awareness and gain support for veterans in need, said Michel, a Vietnam veteran and member of the Western New York Chapter of Vietnam Veterans of America.
He said it is "horrible that men, women, who have served our country ... who sacrificed so much, have to come home and struggle to have a safe place to lay their head. This is just not right."
He added, "We can't help everyone; we just don't have the financial support from the community. But we can help some. And however many men and women we can help each year, that's what we're going to do."
During the event, attendees can fly their own kites or others provided for free.
"It's a free, family-friendly event. We don't charge admission, and we give a kite to everyone who attends at no cost," Michel said.
Event committee member Celia O'Brien, president and CEO of WNY Veterans Housing Coalition, said, "What's nice is we have adults that haven't flown a kite since they were kids; we have kids who have never flown a kite; and, sometimes, it's a way for children and parents to get together and do an activity together - and that's what's fun about it, too. So if you come out for a half-hour or all four hours, it doesn't matter."
Michel said he chose to hold the event at Gratwick Riverside Park because it is ideal for kite flying, due to its open space without many trees.
"I had been by there numerous times and I always thought, 'What a great spot to fly a kite,' " he said.
He later found out Gratwick Riverside Park is also the "home flying field" of members of the Great Lakes Kitefliers Society of Western New York, who frequent the park to fly a variety of kites.
Members of the Great Lakes Kitefliers Society of Western New York will also be attending "Come Fly a Kite for Homeless Veterans" to fly some of their kites, as well as teach others about kite flying, Michel said.
Besides flying kites, eventgoers can participate in raffles during the event.
"This year we have some big-ticket items," including signed Buffalo Bills and Buffalo Sabres memorabilia, O'Brien said.
Other items to be raffled off include approximately 95 hand-painted kites by veterans of Attica Correctional Facility.
Michel, who also volunteers at Attica Correctional Facility, said the veterans contribute their talents to the event each year.
"The veteran art department paints them, and they don't just slap paint on a piece of cloth. It's unbelievable the work that they do," Michel said.
During the event, he said, "Everything is on a donation basis, and if you donate $1 or $100 it doesn't matter. We're just trying to raise awareness and help our vets here in Western New York."
Over the past four years, more than $40,000 has been raised from the event, Michel said.
"This money goes to help veterans (who are) homeless or who are in peril of becoming homeless," he said. "As a veteran myself, one of the first things they teach us in boot camp is we leave no one of our buddies behind. And so that's the whole idea - you know, they (the veterans in need) are not looking for a hand out; they just need a hand. They need a break. And that's what we're trying to do for them, is to say, 'We hear you. We understand and we're going to try to help.' "
For more information, visit www.kitesforvets.com. 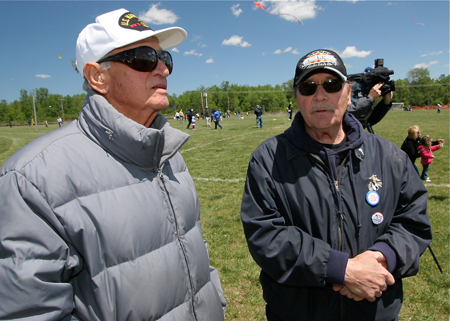