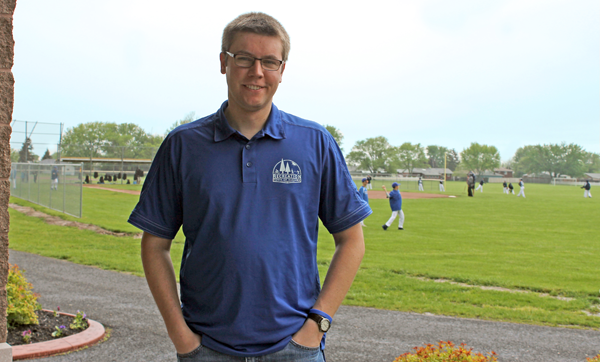 Niagara set to 'Neaten Up': Townwide annual cleanup is June 3

Fri, Jun 2nd 2017 02:00 pm
By Karen Keefe
You've got to admit it's a neat idea.
The Town of Niagara is getting ready for its second annual "Neaten Up Niagara," a spring-cleaning event on a townwide scale.
On Saturday, June 3, volunteers in work gloves will wield trash bags, "poker sticks" and a can-do attitude to undo winter's collected trash and grime on major roadways and in neighborhoods.
"When people come through the Town of Niagara, we want them to see that this is a community that cares about appearances. It cares about the quality of life for the residents," said town Recreation Director Jonathan Haseley.
Volunteers will gather to firm up their work-area assignments around 9:30 a.m. at the Calvin K. Richards Community Center in Veterans Memorial Community Park, 7000 Lockport Road. Then they'll take off for a couple of hours to work their magic. After the cleanup, the town will provide lunch for the volunteers under a big tent.
"Basically, you hand out the products and materials, and then you just turn the people loose," Haseley said.
"Most of what we're doing are our main thoroughfares," Town Supervisor Lee Wallace said.
"There are a couple groups, like the Belden Center Block Club, that will take care of Belden Center itself, which is a small neighborhood," he said. "But most of it is being done on Military Road, Porter and Packard, and places that trash gathers over the winter months, when blowing and drifting takes place."
"This is the town's chance to say to the community groups that we help, 'We need your help now, for two hours.' We can't do this on our own," Wallace said.
Wallace explained that the town and the Fashion Outlets of Niagara distribute a total of $50,000 each year to share among charitable and community groups, as part of the host community agreement between the town and the mall. "Neaten Up Niagara" is a chance for the community groups to give back to the town, he said.
"The town used to do something similar to this on a much smaller scale a few years ago, not on a regular basis - and it was done in April. I moved it to this time of year because - you see what the weather is like - you never knew what you were going to end up with," Wallace observed on one of the area's recent, rain-drenched days.
He said June is also opportune for "Neaten Up Niagara" because, traditionally, it's the town's mass cleanup month. If a resident has an old couch to get rid of, for example, they could put it at the curb, and the Highway Department comes around and picks up all the bulk trash.
Haseley is coordinator for volunteer participation in the June 3 cleanup. He also is pastor of Barefoot Christian Community. His church volunteers will be repeat participants.
"This year, we have even more groups that have signed up," Haseley said. "We sent out letters and asked different groups ... if they would like to participate, and we had a real good response."
Fifty volunteers from 15 community groups, including churches, civic groups and nonprofits, have signed on.
"I see it as people taking ownership of responsibility for their community," Haseley said. "It's sort of like the JFK thing: 'Ask not what your country can do for you; ask what you can do for your country.' We look at that on a local level. How do we work to make our community better for all people? It's a great way for the groups to collaborate, as well. ... It's a nice crossover between all the different volunteers and groups."
"It's something that's building, and we see it as a service component," Haseley added. "With the expansion of the summer concert series, with the Veterans Memorial and the other plans that are coming down the pike with the park, we want that type of community input and community service to be expanded.
"There's been new equipment put at the satellite parks. We want people to look at the Town of Niagara and say, 'Here's a community that cares about the kids in the community, that cares about the families, but also tries to beautify itself, so it's a good place to live, work and play. So it's a way that we can just partner and work together and just make our community a better place."
Categories
NFP Tribune