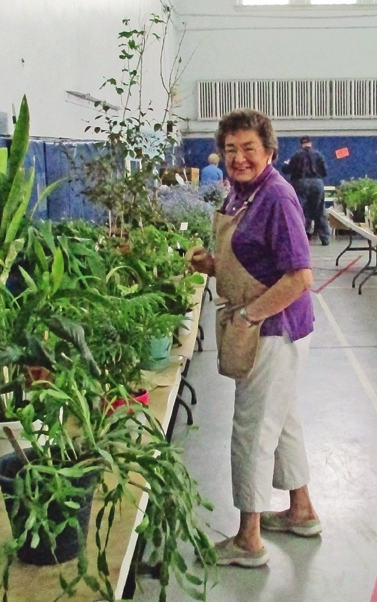 Perennials of all sizes and variations will be found at the May 20 Lewiston Garden Club sale at the Red Brick Municipal Building. (Submitted photo)

Sat, May 13th 2017 09:00 am
By Susan Mikula Campbell
Make a list of plants you'd like to see blooming in your yard year after year. Check it twice, because you're not going to want to miss the Lewiston Garden Club Perennial Sale being held from 10 a.m. to 1 p.m. Saturday, May 20, at the Red Brick Municipal Building, 145 N. Fourth St.
Come in the Onondaga Street door to enter the gym, which will be filled with tables holding perennial plants of all types and sizes. The plants come from members' gardens.
"That's why we can guarantee they're healthy plants, and you can get them at an affordable price," said Kay Kalick, who is in her second year as chairman of the perennial sale. "Sometimes, we even have packets of seeds from members' plants."
Houseplants, bulbs and small bushes also usually can be found; their availability varies depending on what individual gardeners bring in to donate. A separate table holds pots, baskets and garden decor, all donated by members and friends of the club.
Cash or check (no credit cards) will be accepted for purchases. Advice is free.
Experienced members who Kalick dubs "mini master gardeners," such as Lewiston Garden Club President Marianne Gittermann, will be at the sale to talk about their own gardens, give tips on what might grow best in a customer's yard, or give the Latin name for the plant.
"Me, I have to look it up. I'm the one who gives advice on what not to do, because of my experiences," Kalick joked. "I've tried different plants I never thought I would try and some I'd never even heard of before."
Last year, she bought some unusual pink lily of the valley that she's hoping will return in full color this year without blending with her already established white variety.
Kalick will be at a table where she will distribute applications and answer questions about the container garden contest to be part of the club's annual GardenFest & Garden Walk on Saturday and Sunday, June 17-18.
To give everyone a fair chance at what's available at the perennial sale, members aren't allowed to purchase any plants for themselves unless the door to the gym has already opened to the public. Customers can take advantage of the "corral" area to keep purchases while they look for other finds.
Some cardboard boxes will be available, but Kalick said, "People who have been coming for years know enough to bring containers to bring their purchases home." Sometimes, customers bring their children's wagons or strollers.
Garden club volunteers will help carry purchases to cars. Just make sure everything will fit. Before she became active in the club, Sharon Low remembers trying to wrestle a large rose of Sharon into her car. She finally was able to drive home with the top of her plant sticking out of the car's sunroof. It still thrives today.
Kalick, elected this year as third vice president of the Garden Club, said funds raised at the sale will help beautify and make environmental improvements primarily in the town and village, as well as help fund a scholarship for high school students interested in conservation. In past years, the sale also has helped provide plants for Community Missions' grounds and Habitat for Humanity homes.
Gittermann said the perennial sale started in about 1997, a fundraising idea of two of the club's members. The first sale was held outside the old school, but with plants already lined up at the door to go out the next year, rain forced the second one into the gym where the sale has flourished and grown every year.
"It's a tradition now," she said.
The Lewiston Garden Club is celebrating a special anniversary this year -- "90 Years and Growing." At 6 p.m. Monday, May 15, the Village Board will hold a presentation recognizing the club's 90-year milestone.
Categories
NFP Sentinel Sentinel HP Feature List Top News Features