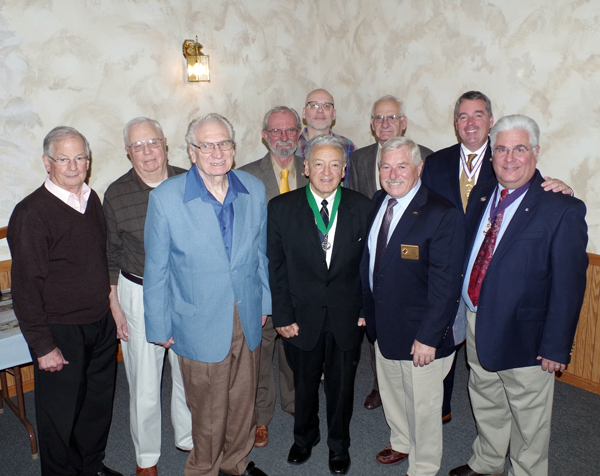 Past Grand Knights of Knights of Columbus Mary Star of the Sea Council No. 4752 gathered for a photo following a 50th anniversary rededication ceremony for their knights hall, at 1841 Whitehaven Road. (Photo by Larry Austin)

Sat, May 13th 2017 07:00 am
By Larry Austin
Island Dispatch Editor
Local Knights of Columbus pledged their continued support to the community in celebrating the golden anniversary of their home on Whitehaven Road.
The Knights of Columbus Mary Star of the Sea Council No. 4752 held a 50th anniversary rededication ceremony Sunday for their Knights hall at 1841 Whitehaven Road.
In marking the 50th anniversary, current Grand Knight Sal Schiavone recalled Past Grand Knight George Sullivan's pledge at the halls dedication on April 22, 1967: "We will continue to take our place to support this community and our church as we move forward, to the best of our ability."
He said the building, the eight acres of land and the trappings of the organization, "are but the outward signs of a half century of dedicated accomplishment by many members."
Approximately 50 people attended the ceremony in the hall. Schiavone said the journey started on May 15, 1958, after the Island Dispatch carried the news of a new Knights of Columbus Council being organized on the Island. The first meeting was held in the basement meeting room of St. Stephen Old Church on Feb. 2, 1959.
After the council was officially chartered March 25, 1959, meetings took place at Del and Herb's restaurant (now Dick and Jenny's); then at the local American Legion Hall, formerly known to old Island residents as Mary Star of the Sea Church, and known later as the Grand Island Masonic Lodge, Schiavone said. In June of 1960, the council leased the former home of the retired Erie County Sheriff, the late Frank Offermann.
On Jan. 14, 1965, with the money raised from an established building fund drive sponsored by the local Catholic Club, eight acres of land was purchased for the council's new home on Whitehaven Road. On July 14, 1966, with the aid of those funds and the proceeds from weekly bingo games, the knights signed a contract for construction. Ground was broken July 31, 1966, and the council moved into the completed building on Jan. 1, 1967.
"Thanks to the hard work, dedication and many hours put in by our members, the goal to finally have a permanent home was accomplished," Schiavone said. "The first meeting was held in the new building on Jan. 20, 1967. Total cost of the construction and fees came to $49,443."
The building was officially dedicated April 22, 1967, by the Rev. Richard Graeber the assistant pastor of St. Stephen Church. Sullivan said, at the time, "The Knights of Columbus has planted its roots in the soil which lies beneath us and we stand here today to take our place in this community and to serve its people to the best of our ability."
Over the years, bingo, catering and hall rental have helped the knights with hall maintenance as well as funding charitable works.
The list of clubs and organizations that have used the hall over the years is lengthy: senior citizens, who had free use of the hall prior to the opening of the Golden Age Center at the Nike Base; Boy Scouts, Little League, Junior Vikings Football, Red Cross blood drives, the Miracle League of Grand Island and WNY, and the Neighbors Foundation Christmas food drive, to name a few.
The knights came to the rescue during the Blizzard of '77, on Jan. 29, 1977. For those who were hungry, the knights gave something to eat; for those who were strangers, the knights took them in.
"Our doors were opened and many stranded travelers were provided with food and lodging for the night in the council hall," Schiavone recalled. "Kindness and brotherhood were in evidence during this arduous time."
The kindness of the Knights was returned when, after a fire on Feb. 8, 1980, caused $60,000 in damage to the council building, the Grand Island Fire Co. opened its hall to the knights for catering that had been previously booked.
Meetings moved back to Old St. Stephen.
"The hall was remodeled and a new heating/cooling unit installed on the roof, replacing what was called the Old Monster on the back wall of the hall. In late December, thanks to the efforts of many, the hall was reopened for bingo, catering and parties. We also managed to pay off the building mortgage by December 31, 1980," Schiavone said.
In 1970, a 600-square-foot addition was made to add storage space and a game room. In June of 1982, the kitchen was expanded. In July 1987, the picnic shelter was built in the back grove area. Another expansion of the building for equipment and storage was completed on June 12, 1989.
"With the continued direction from our patroness Mary Star of the Sea, we look with confidence to the future," Schiavone said. "Sustained by our record over the past 50 years, let us pray that the future years hold as much promise and productivity as the last, and that we will continue to hold the esteem of our community."
Categories
Dispatch Dispatch feature