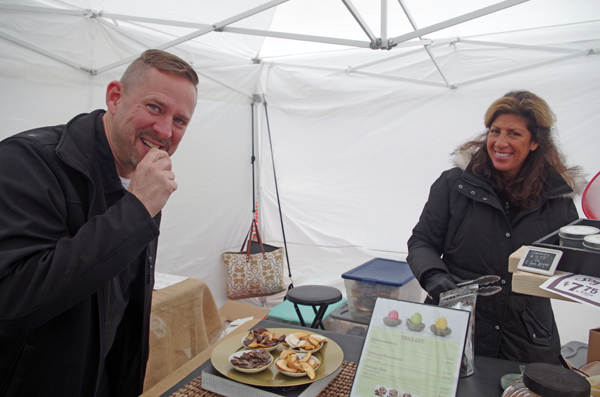 Sat, May 13th 2017 07:00 am
By Larry Austin
Island Dispatch Editor
Supporters of the Grand Island agriculture movement were buoyed by the public response to the first-ever Farmer Fest event, which took place Saturday despite a cold, dreary rain.
A steady stream of shoppers visited the festival site during its five hours of activity. Grand Island Farms, which is cultivating a farmers markets on Long Road with plans to expand to the Knights of Columbus Hall on Whitehaven Road, had a hand in organizing the Farmer Fest that symbolically kicked off market season.
It also coincided with the grand opening of E.H. Enterprises at 555 Ransom Road.
"It brings the community together," said Betty Hopkins, owner of E.H. Enterprises, where the event was held. "Everybody that's come in here is happy that we have something like this."
The event advertised things like smoked chicken legs, Italian sausage, barrel birch beer, vegetables, fresh meat and eggs, jams and jellies.
Sheila Daminski, who helped organize the event, said, "We've been having Saturday markets once a month, and with the opening of the greenhouses again, this seemed like a perfect venue for it, to bring everybody's attention to the fact the E.H. Enterprises is open again."
About a dozen farms were in attendance, but Daminski said that represents just a fraction of the farms on the Island currently. She called Island farms "a substantial number."
"There's a lot more than 12," she said. "There's about 100 farms in the agriculture district on Grand Island, but there are farms that are on the Island that aren't even in that." She estimated 1,300 acres on the Island are being farmed presently, and 50 percent of the Island has potential for agriculture, she stated.
The festival served to spread the awareness of a hidden part of the local market. Daminski hoped that events such as Farmer Fest will drive the farm economy, giving farmers the impetus "to grow more, sell more. It's going to be better and better for the Island."
Holding the farm festival at E.H. Enterprises was a way of saying "We missed you." Hopkins, who has been at loggerheads with the town government on zoning issues, said she got permission from the Department of State in 2006 to operate her business, but the town continues to "just ignore it." Hopkins said Saturday the town's "code enforcement is still after us."
She operated from 1984 to 2014 before closing the greenhouse portion of her business and restricting her operation to sale of topsoil, mulch and trees. "We were doing fine until 1991," she said, when the town told her "we had to close down because the town didn't know what we were doing. That's after nine years. And we used to sell flowers to the town and the supervisor used to sign the paperwork, so, I mean, it was one stupid thing after another."
She called the greenhouse, which went up in 1999, "a thorn in their side because they think it could kill people. It's going to topple over," she said, laughing sarcastically.
It didn't topple in Saturday's rain.
Hopkins wasn't alone in her disputes wit the town. Daminski claimed the former town government had been "actively just trying to eliminate agriculture as much as possible."
"Development of apartments was more important than development or protection of greenspace and farmland," she said. 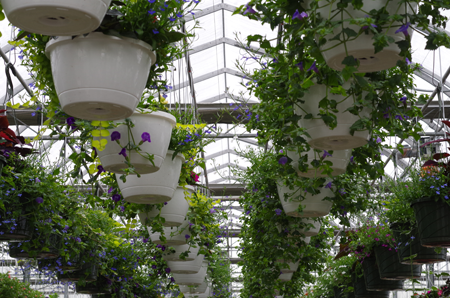