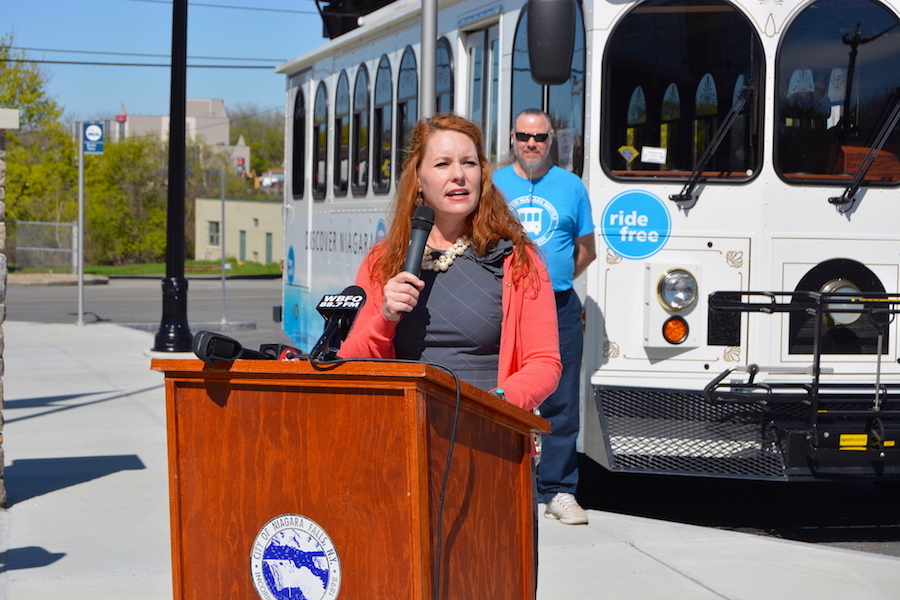 "We're here to celebrate the second annual season of the Discover Niagara Shuttle and also celebrate national travel and tourism," Congressman Brian Higgins said. "The shuttle service recognizes Niagara Falls is one of the greatest destinations in all the world, and embraces the opportunity to share the story treasures of this region with those who come here to explore it."

Niagara Falls Heritage Area Director Sara Capen, who has spearheaded the shuttle project, said, "The Discover Niagara Shuttle serves as a vital link to connect visitors to the places that define our cultural heritage. By doing so, it extends stay and generates economic impact within our communities."

The free shuttle will transport passengers to various local tourism sites this weekend, and begin running daily from 9 a.m. to 6 p.m. Sunday through Thursday, and during new extended hours from 9 a.m. until midnight on Friday and Saturday.

The shuttle is up and running with more amenities than last year, as well as new stops. Added to this year's destinations will be the Third Street entertainment and dining district, Oakwood Cemetery and the Niagara Falls Train Station, which is also the site of the future Underground Railroad Heritage Center (slated to open in 2018).

New technological features have also been added to the shuttles this year, including onboard digital screens that display narrated videos on the stops along the route, as well as a new website, www.discoverniagarashuttle.com, which provides further information on the shuttle and local sites.

"These added amenities - in addition to existing amenities that include complementary Wi-Fi, bike rakes, the Discover Niagara and Discover Niagara Shuttle apps, connection to the Niagara Falls State Parks trolley and Niagara Falls metro trolley, and vehicles that are fully ADA-accessible - will enhance the visitors experience in many ways," Capen said. 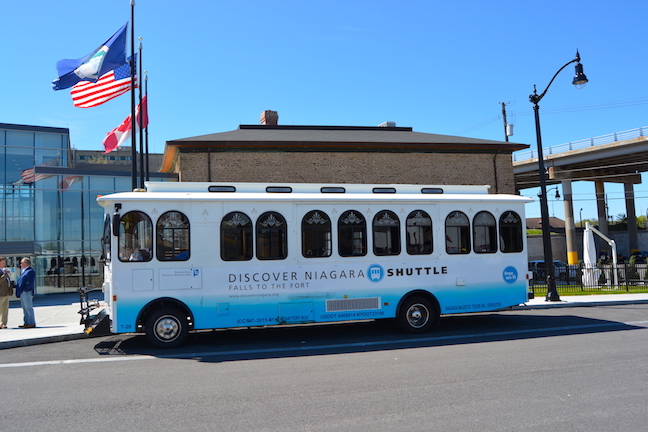 City of Niagara Falls Mayor Paul Dyster applauded Capen for securing the funding for this project two years in a row, which he said has not been easy.

"This project simply would not be possible without the support of so many of our partners," she said.

Although the shuttle's return for its second year was celebrated this week, it might not make a third run next year. The Niagara Falls National Heritage Area, which operates the shuttle service, may not receive federal funds needed for 2018.

"This program, recently reauthorized by Congress and funded through September, is slated by the White House for elimination in 2018," Higgins said. "There are certain things that should transcend partisan politics and this is one. This defines us as a country. These heritage areas are vitally important to the narrative which is uniquely American."

He added, "We will be fighting very aggressively to ensure that, despite efforts to eliminate funding, we will get this funded again in 2018."

Dyster said, "I want to commend Congressman Higgins for his efforts thus far to try and preserve national heritage area funding in the upcoming budget. I think you're just really getting started on that fight. And I want you to know, as mayor of City of Niagara Falls, I'm a very, very strong supporter, because I have seen benefits that a strong National Heritage Area program can bring to one of America's iconic tourist locations. We are a better destination for having the National Heritage Area here. That's a story that I want to tell over and over again."

Capen explained the Niagara Falls National Heritage Area receives approximately $300,000 in federal appropriations. Without those funds, "It would be extremely difficult for us to function."

She added, "We need that federal funding to operate."

"I can't imagine that you could get a stronger leverage of federal dollars than what you get with the National Heritage Area program," Dyster said. "It brings relatively modest amounts by federal budgets standards of funding into local communities - a few hundred thousand dollars - but leverages millions of dollars of investment."

He also said, "At some symbolic level, this shuttle has even greater importance than at the practical level, because it ties people together; it reminds us of the common identify that we share here up and down (the river). ...We are all people of the Niagara River, who live along the river. Whether you live in the city, the suburbs or a rural area, you have a common heritage." 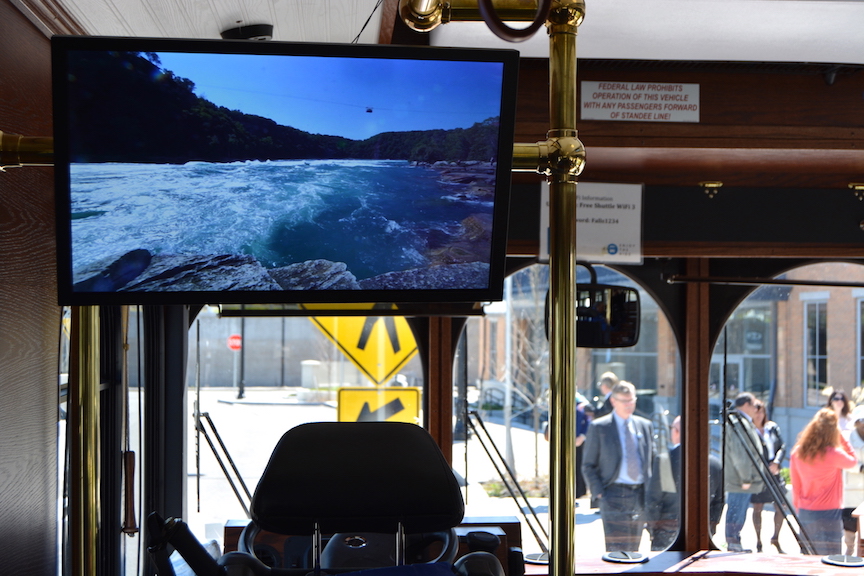 Pictured is a scene from the informational video played on one of the new digital screens.