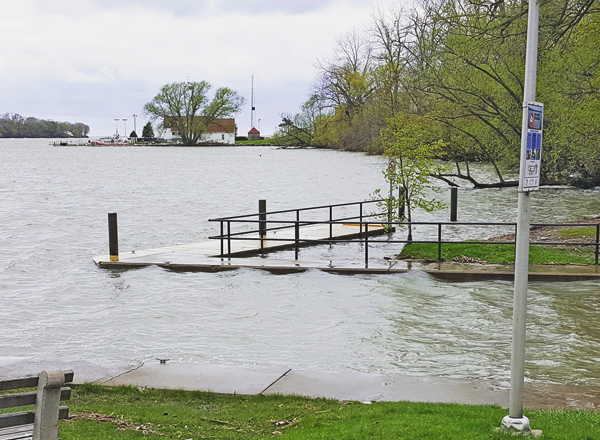 Don't look outside now ... but it's raining.

That has certainly been in the mindset of lakeshore property owners, private and government interests, local residents, and the Niagara County region's boating community in general.

For what seems like weeks now, storm systems throughout the country have wreaked havoc in the Western New York area of the Great Lakes, with days of heavy-duty bouts of rain coupled with exacerbated flooding woes being the result. Low-lying drainage areas have been deluged and local creeks are overflowing their banks from heavy rainfalls - the latest being just this week.

That comes on top of the pains now being felt by scores of Lake Ontario property owners from weeks of heavy precipitation and spring snow melt. The result is historically high lake levels, extensive erosion problems and significant loss/damage to property.

According to the International Joint Commission's Lake Ontario-St. Lawrence River Board, which regulates Lake Ontario under the recently passed and controversial Plan 2014 (see related article at www.wnypapers.com), as of Tuesday, Lake Ontario remained at 21 inches above normal and more than three feet over its December 2016 average.

This week has seen disaster areas being declared statewide throughout the entire Lake Ontario basin, extending on the west from Youngstown clear across the state to the Oswego-Syracuse areas and up toward Watertown and points north.

On April 20, Niagara County declared a 30-day disaster area for county shorelines on the lake. And on Tuesday, May 2, Gov. Andrew Cuomo expanded on that by declaring a state of emergency in the Lake Ontario counties of Niagara, Orleans, Monroe, Wayne, Oswego, Lewis and Jefferson.

Both measures now allow for expedited assistance on the county and state levels to the impacted high-lake water victims along the entire affected Lake Ontario shore areas. 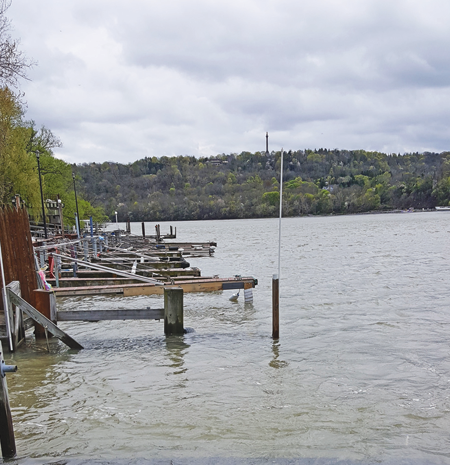 "With waters on the Lake Ontario coastline rising to the highest levels in 20 years, we are remaining vigilant and will continue to do everything in our power to assist communities with flooding preparation and response measures," Cuomo said. "I am declaring a state of emergency to expedite flood mitigation efforts throughout the region and provide support to all New Yorkers in need of assistance. In addition to the Lake Ontario Rapid Response Team, expert coastal engineers are being deployed to local governments and residents in harm's way."

Just how bad has it gotten?

Well, according to www.niagaracountyweatherwire.com, a local online weather source, the Niagara County area has seen a tremendous amount of precipitation this spring - the bulk of it being rain. How much? Over a seven-day period, up to midday on Friday, 2.86 inches of rain has fallen in the Niagara County area, with 2.47 inches just since Monday. Thus far this year, over the course of 52 rain days, Niagara County has recorded 15.25 inches - 6.04 inches over normal.

And it's still raining! The online weather forecast through Sunday is for 100 percent rain almost throughout the entire period, with upward of 2 additional inches of rain expected over what's already fallen in Niagara County.

Then the weather is expected to turn colder, with the rain turning to snow showers for Sunday into Tuesday.

And how is it impacting things? Plenty.

The problems worsened over last weekend, as strong northeast winds brought very damaging waves Sunday to the already threatened properties - a situation that was expected to return on Friday.

The result has been a shutdown of boating and shore-related activities in the county area over the past several days. In the Wilson and Olcott Beach areas, scores of residents and businesses continue to deal with flooded shores and properties, along with docks and marina facilities under water, and extensive property losses or damage.

And elevated water levels are now backing onto the shore areas of the lower Niagara River from Fort Niagara State Park upriver to Lewiston. Old Fort Niagara is experiencing dramatically high water levels that threaten to undermine the seawall foundations at the French Castle; emergency sandbagging has been occurring in the Water Street areas of Youngstown; the village docks remain under water in Lewiston; and virtually all boating activities throughout the lake and the lower river areas are nonexistent.

In fact, scores of boating interests throughout the area, who normally would be in the process of readying and launching sailboats, powerboats, fishing boats, etc., for the upcoming season, remain at a standstill with delays of flooded launch sites, reports of docks and electrical connections being under water, and continuing advisories on boat travel, wakes, etc., remaining in place.

So what is being done?

On the state level, Cuomo has directed a coordinated and elaborate Lake Ontario Rapid Response Team, including the Department of Environmental Conservation, the Division of Homeland Security and Emergency Services, National Guard, State Police and Office of General Services, along with city and county agencies to initiate large-scale emergency response actions.

At the governor's direction, 365,000 sandbags have been deployed to the region and are ready for placement in lower elevation areas. The deployments by county are as follows: 60,000 for Niagara County, 30,000 for Orleans County, 115,000 for Wayne County, 50,000 for Jefferson County, 30,000 for Oswego County and 80,000 to Monroe County. Five sandbaggers have also been deployed to Niagara, Monroe and Wayne counties.

The U.S. Army Corps of Engineers, Buffalo District, issued a declaration of emergency this week to assist the local and state government efforts in response to high water levels on Lake Ontario.

According to the Corps, its technical assistance consists of providing review and recommendations in support of state and local efforts, and helping determine feasible solutions to uncommon situations.

The following are examples of technical assistance:

However, Army Corps officials warned lake levels are likely to worsen throughout the month of May, possibly into June.

Meanwhile, Cuomo announced the state is formally appealing to the International Joint Commission, the board that regulates Plan 2014, to take action. Specifically, Cuomo is calling on the IJC to release additional water through the Moses-Saunders Dam to lower Lake Ontario water levels and protect impacted communities. That follows earlier demands by local officials, along with U.S. Reps. Chris Collins and John Katko of Syracuse, for IJC to address the issue.

IJC spokesman Frank Bevacqua cautioned, however, that any release of flooded Lake Ontario into the St. Lawrence system upstream takes time, and the affected communities should not anticipate much significant relief from the elevated water levels anytime soon.

"An increase in the outflow from Lake Ontario of 29,000 cubic feet per second will remove 1 inch of water from Lake Ontario over the course of one week. This same flow will increase levels of Lake St. Louis (near Montreal) by about 11 inches for the whole week," Bevacqua said.

So, it appears that, for now, the thousands of affected interests throughout Niagara will just have wait this one out - and hope for a prolonged drought. 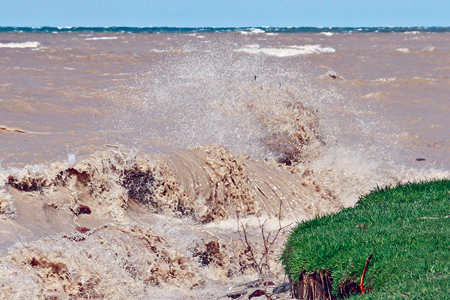