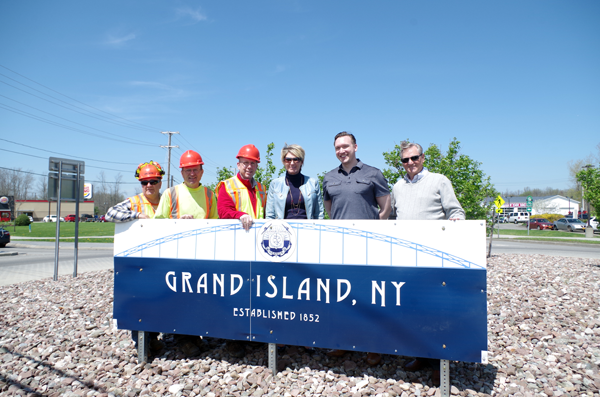 Last Friday, April 28, town crews erected a welcome sign in the roundabout, and now the town government wants to know what citizens think about it.

"This is just a test. We want to get people's feedback on it, so if there's not a huge negative feedback, they're going to go forward with this," McMurray said.

The temporary sign would be replaced eventually with a three-dimensional sign that looks similar to the school district's signs, such as the one in front of Grand Island High School.

"Let us know if they want a sign here," McMurray said. "If the people want it, it's going to be done."

"We want to do it step by step to enhance this whole area," McMurray said. "Imagine what this would look like with lights on these trees all shooting up - solar lights - and then this three-dimensional sign with lights on it."

"It'd be a gateway effect welcoming people to the boulevard."

Deputy Highway Superintendent Dick Crawford said the Highway Department staff worked with Cyndy Montana, assistant to the supervisor, and Jim Linenfelser of the town on installing the sign.

"They had the concept and we took care of all the 811 dig calls to make sure it was clear of any hazards to dig," Crawford said.

Crawford said the interior of the roundabout is the responsibility of the town.

Montana noted the original design of the roundabout called for a sign.