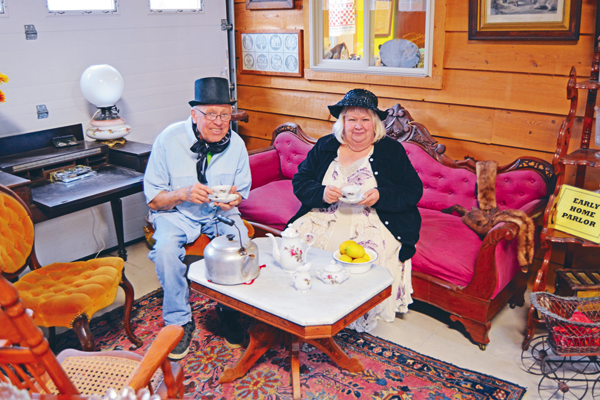 The Sanborn Historical Society will present its first Victorian tea and luncheon from 2-4 p.m. Saturday, May 20, at the Sanborn-Lewiston Farm Museum, 2660 Saunders Settlement Road, Sanborn.

The event is open to the public and will feature dining and dancing - all inspired by the Victorian era. It will be held in the museum's hall. The menu will feature traditional English fare, including sandwiches, desserts and, of course, tea. Also, dance performances will take place by members of the Amherst Victorian Dance Society, a guild of the Buffalo Niagara Heritage Village. Attendees can also enter a raffle for a handmade quilt donated by Karolyn Lauffer. The winner's name will be drawn at the Farm Festival on July 23.

"We've always wanted to try this," Sanborn-Lewiston Farm Museum Curator Bonnie Haskell said of the event. "We were aware that other places had done it. ... We thought it would just be kind of cute."

The museum features Victorian displays, including an entire Victorian living room complete with furniture and teacups.

To add to the historical setting, the hall will be decorated with Victorian-style items.

"We're going to put up some mannequins with some vintage dresses on them and a showcase with vintage items from the Victorian era," Haskell said.

Attendees are also encouraged to wear Victorian-style clothing, although it is not a requirement. There will be a prize for the best-dressed attendee.

All dancers will wear traditional clothing, which they will also discuss with attendees, aside from performing.

"We do a whole variety of dances," said Amherst Victorian Dance Society President Michael Dowling. The group will perform waltzes, polkas, gallops and many other dances that were popular during the Victorian era. "All our dances are from that period and generally taken from dance manuals that were written during that area."

He said group members also put on demonstrations to show the group how to do certain dances.

"We always look forward to our crowd interaction ... where we get everybody up and everybody has a good time," Dowling said. "Nobody worries about the right step or the wrong step. The dances that we do, folks can pretty much dance through in a matter of few minutes with little instruction. So that's always is a plus for us."

Dowling said, "Between our music and the dances and the dress, we try to get ourselves in the spirit of that time," and performing in historical buildings can add to the overall experience.

He said one of the things he looks most forward to with the event is "certainly, before and after, being able to explore the facility and the museum there, appreciate the trip back in history that's provided by their facility."

Haskell said the event will serve as a new way to encourage people to visit the museum, or even get involved.

"Anytime we have an event, you never know who might decide to join the museum or volunteer to help," she said.

The event can also help support the museum and its offerings, as all proceeds generated from the event will benefit the museum.

"If it goes over (well), we might also have one in the fall," Haskell noted. 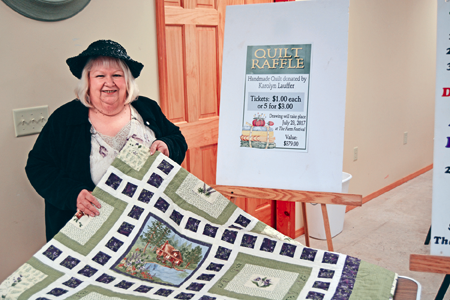 Sanborn-Lewiston Farm Museum Curator Bonnie Haskell displays a handmade quilt, donated by Karolyn Lauffer. Raffle tickets will be available for purchase at the Victorian tea and luncheon event for $1 a piece or $3 for 5. The drawing will be held July 23 at the Farm Festival.