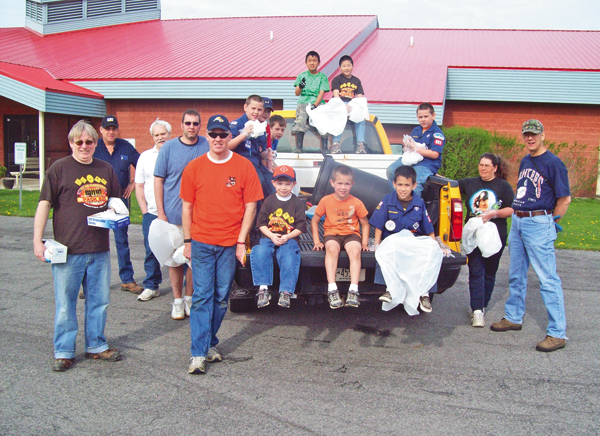 On Saturday morning, volunteers from Cub Scout Pack 833 (out of Adams Fire Co.) and Town of Wheatfield officials will take part in the Liberty Drive Cleanup, a tradition going on its 26th year.

Volunteers will meet at 9 a.m. in the Frontier firehall parking lot at 2179 Liberty Drive to spend the next hour or so picking up "anything that looks like trash," said Larry L. Helwig, Town of Wheatfield deputy supervisor and coordinator of the event.

Dave Greinert, a den leader for Cub Scout Pack 833, said, Scouts, in general, are "very environmentally friendly. And cleaning up the trash and the rubbish and whatever else is along the road is very important to our ecology."

Besides helping the environment, Helwig said the cleanup may also benefit business in the area.

"If you got future businesses looking to relocate to Wheatfield, if you're right next to a lot of trash and garbage, it doesn't look as pretty as if it's all clean and green," he said

Greinert said one of the reasons Cub Scouts should do community service, like cleaning up for the community, is "it helps build citizenship. And this is a way for young men to learn to give back to the community. It's definitely not a very hard thing to do, but it shows them the value of giving back to the town.

For some Scouts, this will be their second or third year participating in the cleanup.

"Every time they're doing it they have smiles on their faces - as long as it's not raining," Greinert said.

Items to be cleaned up typically include "everything from cigarette boxes to plastic bottles, tin cans," Helwig said. Adults, including Scouts' parents, are on hand to make sure the Scouts stay away from glass, sharp objects and even needles, which have been found in the area, he added.

To help out with the volunteers' annual effort to keep Liberty Drive clean, the Frontier Fire Co. will open its firehall's doors to provide beverages and restroom facilities to the volunteers, as well as parking. Helwig said elected officials usually donate a box of doughnuts or so, as well.

"The Scouts always do a great job," Hunt said. "It's just a shame that people keep dumping back there."

Helwig said less garbage has been disposed of in the area compared to when the tradition began, but dumping is still an issue.

For years, Modern Corporation donated the use of Dumpster for the cleanup.

Helwig explained the area was previously used as a "dumping ground" because the town "didn't have a lot of businesses out there yet. And it was a road that probably went nowhere, and people used it as a desolate place just to dump stuff that they didn't want."

He said, currently, "People still dump trees, dead deer carcasses, you know, they dump everything back there still." And, every year or so, "somebody gets a fine or a ticket for doing something illegal back there." 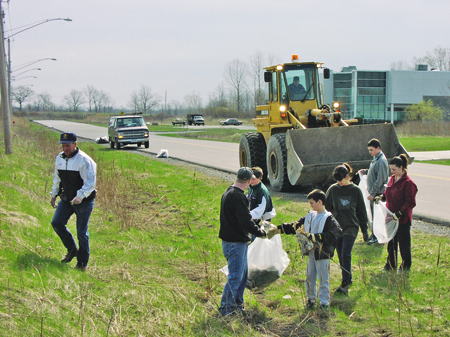 Volunteers, including Cub Scouts and town officials, participate in a past Liberty Drive Cleanup event.