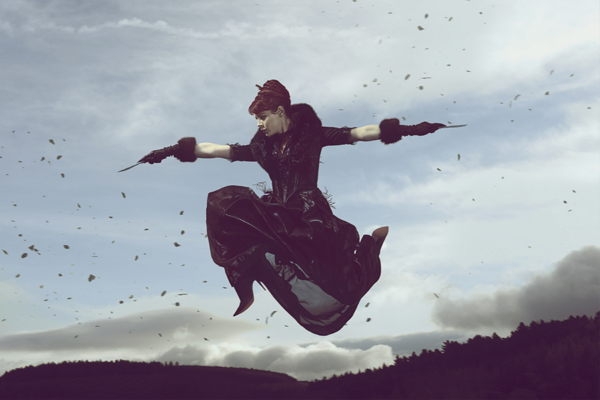 "Into the Badlands": Emily Beecham as The Widow. (AMC photos by Antony Platt, Patti Perret and Carlos Serrao)

Meet The Widow: Emily Beecham goes 'Into the Badlands' to build killer character

In the world of AMC's "Into the Badlands," a collection of all-powerful barons has carved out colorful territories marked with lush red poppies, sprawling green forests and blue butterfly banners. It's a stark contrast to the dusty, desolate lands found outside the walls, where mankind has all but destroyed itself.

It's a "Willy Wonka" world, of sorts, where the audience can't easily ascertain the time period. Horse-riding warriors wear Lincoln-era costumes, even as others ride motorcycles and drive classic cars. There is electricity, but items such as computers, televisions and phones are a thing of the past.

Amid the backdrops, and mounds of high-paced martial arts sequences, are a handful of dynamic characters.

There's Quinn, once the most powerful and feared baron, now relegated to the Badlands' outer realms. He rules over his men with cold-blooded determination, and doesn't hesitate to shed blood instead of exchanging words.

Martial arts film star Daniel Wu (also a producer) aptly portrays Sunny, a famed clipper (soldier) and regent (general). A tormented and conflicted master of the sword, Sunny has more than 400 tattooed marks on his back, each one representing a life he took for Quinn, his former baron.

When Sunny's love interest becomes pregnant, he re-evaluates his position within the Badlands, and works to become a better man. In season two, he is exiled, and searching for a way back to Val (Madeleine Mantock), and their newborn son.

A student of kung fu and wushu, Wu is at the center of the show's most sophisticated and slickly choreographed fight scenes.

"Into the Badlands" also features "Avatar" star Stephen Lang as the cunning, wheelchair-bound ex-Quinn clipper Waldo; Ally Ioannides as the skillful, ninja-star-throwing Tilda, who's super-deadly, and yet longs to be a normal, compassionate teen/20-something; and Orla Brady as Quinn's scorned wife, Lydia, whose passion for her husband is bound to kill one or both of them.

And then there's The Widow. 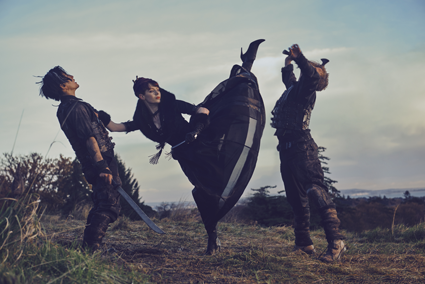 Formerly known as Minerva, Emily Beecham's character earned this name following the death of her abusive husband - we're told at her hands. In the wake of her "loss," The Widow has recruited and mothered a group of "butterflies," trained female assassins every part as deadly as the clippers.

With "Into the Badlands," producers Miles Millar and Alfred Gough ("Smallville") have created a vibrant world within a post-apocalyptic-style framework, and they've filled it with equally vivacious characters.

It is in that structure that Beecham shines brightest.

In real life, the England-born actress is 5'5, polite and soft-spoken. On screen, however, she is a towering presence as The Widow.

Ten minutes into the series' second episode, The Widow, looking to make an alliance against Quinn, is targeted by a handful of hired guns (Or hired swords, in this case. There are no guns in the Badlands.) With the grace of Fred Astaire and the bladework of "Kill Bill's" Beatrix Kiddo, The Widow slices through her would-be attackers and quickly clears the room of all threats. (Watch the video at the end of this article.)

One can see The Widow is capable of handling herself, and yet Beecham shows vulnerability in her facial expressions. In this fashion, Beecham is channeling her inner Sarah Michelle Gellar. She's strong and skilled, but doesn't look for a fight.

Ultimately, she's created a character as badass as Buffy, and certain to show some of the same gut-wrenching emotions as the vampire slayer.

In a recent phone interview, Beecham shed some light on the origin of her role. She offered praise to her producers and credit to her castmates. Beecham also gave a glimpse into season two's final few episodes (Sundays, 10 p.m. on AMC). 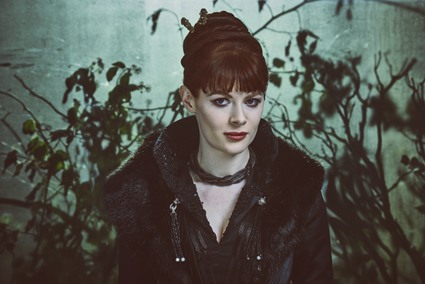 Q: I binge-watched the first season on the day of the season two premiere, and this show has really become one of my favorites. I had to reach out to AMC and ask for this interview, because you're so good in this role. What drew you to this series?

Emily Beecham: Oh, so many things. The creators, first of all. ...

Of course, the network, AMC, has such a good reputation making really original, interesting dramas that have a bit of an edge. I like a lot of things that I watch on AMC. It's one of the best networks.

Q: You used some really great adjectives to describe The Widow. Tell me about this character. What do you like about her?

Emily Beecham: She's very mysterious and you never truly feel like you get who she is, and she always keeps you guessing. I think part of her strength is being quite manipulative and strategic. A character who always remains a mystery, but her backstory is very interesting, which makes her a little bit of a hero, because she's faced a lot of difficulties ... in her life. She's a metaphor about the butterfly. She becomes big and free and bold, and this big, foreboding leader.

I think she's a really interesting character who's also misunderstood by other characters -- which also I really like in a character. 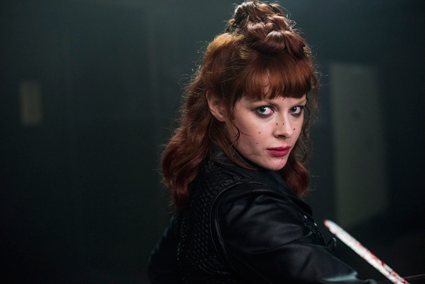 Q: It's interesting that you call her a hero and misunderstood. This show is chalk full of morally ambiguous characters. You don't know if these people are good or bad, or whether you should root for them or against them. There was an interesting line in the past episode. One of the "butterflies" said The Widow is "mother instead of master." Do you consider her to be a hero? Do you think she is the one with redeeming qualities?

Emily Beecham: It's hard to say, because I feel like she is changing as the whole system, the Badlands, changes, and how her position in that changes. I feel like she is altering in order to survive. So, as she gains power - the good thing about her, I think, is that she questions herself quite a lot. And she often doubts herself, which is a good thing -- that she often checks in with herself.

She doesn't always behave; her actions aren't often the most moral things. But then, I guess ... the Badlands is a place where people fight to survive.

Her ideals are very good and strong, in that she's fighting for equality. The way she goes about it is morally ambiguous at times, yeah. 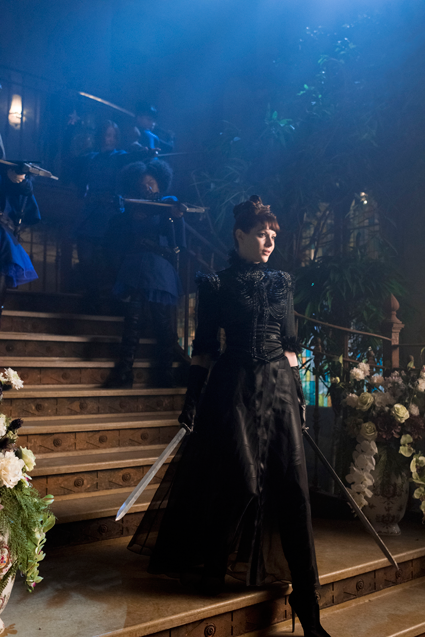 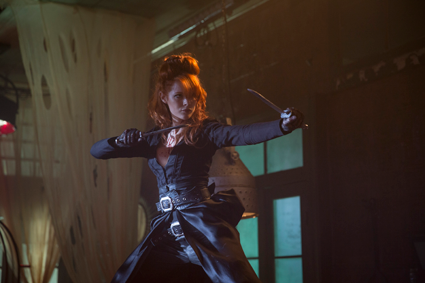 Q: How do you get into this role? What does it take to become The Widow?

And the way she dresses is obviously, at times, sometimes quite seductive, and she dresses very beautifully. And so there's that to think about, as well. Why is she doing that, if she wants to be taken seriously -- as an equal within this rather male-dominated land? Unless she's using all these little parts of herself as tools to get where she wants.

So, I thought about it a little bit like that, that it was sort of a character of herself. So, it's as if she was sort of taking on a character in a way. And at times, sometimes losing sight of who she really is.

But also the costume helped, actually, as well. I mean, once you put those heels on, just being taller really helps. And the shoulder pads and the makeup and the heels and the corsets and all these things help a great deal. Because I actually look extremely different with all that on -- it's actually quite comical how different I look. (Laughs)

Q: Tell me about the fighting and the stunts -- the martial arts, the swordplay. How much of that is you, and how much of what we're seeing on screen is not you?

Emily Beecham: We do a great deal of it, but then we have amazing stunt doubles, who are incredible. The way that we shoot the scenes, it's not actually choreographed before. So, we will step onto the set, and (Huan-Chiu Ku, aka Master) Dee Dee, our choreographer, will be sort of creating the fight as we go along.

So we're waiting until we're stepping onto the set. And they'll show us a sequence of about five moves. It's broken up into chunks. It will be about five moves, but I mean it's sometimes ... really intense. 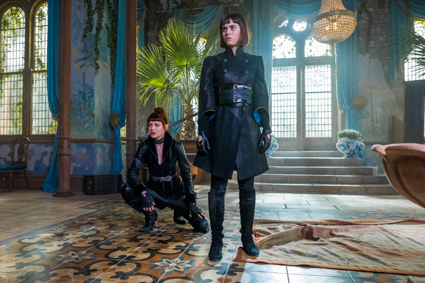 Emily is shown with Ally.

Q: Tell me about your castmates. It's a great cast. Marton is just completely off his rocker, and Stephen has so much gravitas. And Ally, she can certainly hold her own as Tilda (The Widow's "daughter" and top soldier).

Emily Beecham: I work with Ally a lot, obviously, and she's so intelligent and mature, and so funny and kind, and fantastic. I love working with her; we've become good friends and friends for life. She's such a great human being.

I've loved working with Marton, too. I find him very generous on the set. He always has wonderful ideas for the scenes. He's actually really very sweet. He plays very tough characters, but he's actually a really sweet guy. (Laughs)

And Orla Brady. We're always saying that we'd love to do some more scenes together. ...

I've got a great cast. And we have some new additions to the cast this season. It's fun to get to know these new people. You always have a different chemistry with different people. It sort of evolves as people come and go.

(In recent episodes, Sunny and his new friend, Bajie, have worked their way closer to the Badlands. M.K., meanwhile, has somewhat learned to control his "dark chi." He's discovered the abbots who abducted him in the season finale, supposedly to cleanse him, also seem to have "dark chi." And, with The Widow recently targeted by the other barons, she's reached out to Quinn, perhaps thinking "the enemy of my enemy"?)

Q: What can you hint at for the rest of the season? The Widow just made an alliance with Quinn, which is very interesting.

Emily Beecham: We'll explore more of the "dark chi." ... The Widow will be playing with the "dark chi" later on, which is exciting. And understanding more about The Widow's past. And we get to know more about Bajie. ...

There's quite a shocking tragedy. That's all I'm going to say! There's sort of a bust-up. A big, old bust-up between a couple of characters.

WATCH THE WIDOW IN ACTION: