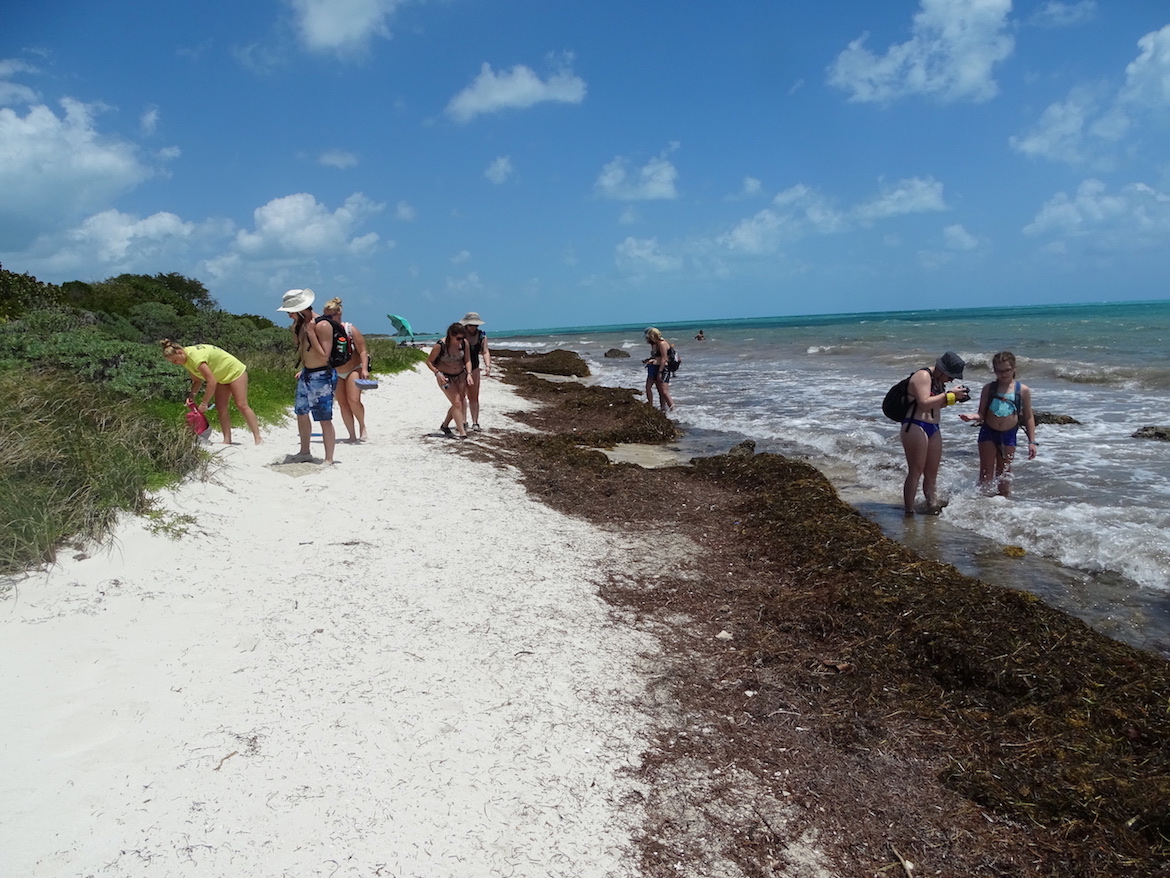 Field ecology students enjoying and observing life on the beach.

Those who explore the ocean to any extent are treasure hunters. The creatures that inhabit the ocean are available to those who truly look for them. Tiny snails and crabs are in rock nooks, anemone, algae, sea baskets, washed-up lobsters and coral. Only with close observation will one find these treasures along the coast and intertidal zone.

This is what the students of Niagara University field ecology class set out to explore at the Florida Keys during Easter break.

The trip had been planned for upward of four months, the additional gear was purchased, the video plans set, the bags packed and then ... a cancelled flight.

Defeated, the ecology students were sent home to wait two days before returning to the Niagara Falls Airport to take off to Fort Lauderdale.

The students anxiously waited in line to get checked in, only to find out there was a miscommunication and their tickets were actually for Tuesday, not Monday, as they had been told by the airline.

By this time, the trip was starting late by three days, and the students were doubting that they would ever leave Niagara Falls.

Larissa Ost, a senior international student from Germany, a tourism major, wrote on Trip Advisor, "Our flight got cancelled (reason: understaffed plane!). So, instead of traveling from April 7 to 17, we changed our dates from April 11 to 19. This was the only available option. However, we would not fly to Fort Lauderdale but to Orlando and drive from there 7 hours down to our campground. ... We have not received any refunds."

The group is still hoping to receive compensation for the time delay that resulted in the students missing more of their class days. Dr. William Edwards and Colleen Edwards, who organized the events of the trip, also had to scramble to make the trip plans work.

Besides the time setback regarding the flights, the trip eventually began on April 11. The goal of the ecology trip was to learn about the environment of the Florida Keys through immersion. The students snorkeled, kayaked and hiked through the Keys -- all while filming the sights they saw. The camera equipment brought by the science department ensured good quality, and the cameras had waterproof cases so underwater shots could be taken.

"The trip was special, because we got to experience a completely new environment while learning about it, with new people, and that contributed to a whole new relationship with everyone involved," said Lexie Gerhardy, a sophomore biology major.

The class of eight had a unique set of characteristics that influenced the group's personality.

"We all bonded and became one huge family. These are memories that will definitely last a lifetime," said Nicole Fura, a junior criminal justice major.

The group also joked that the 13 travelers (8 students, 2 adults, 3 children) seemed like one large adopted or extended family as they traveled around the Keys.

The ecological field trip was open to all majors, and with that there were varying degrees of experience and background.

"It was special to be out of what we are typically used to day to day and see new perspectives," said Megan Piluso, a senior marketing major.

The students had class three times a week for 55 minutes and several night labs to practice snorkeling, learn camera skills, and to pack up the correct gear for the trip.

One of the day's activities was visiting an organization called Dolphin Plus in Key Largo. Several of the group's members were hesitant to support confined dolphins, especially with information such as the negativity surrounding Sea World and films such as "Blackfish." But Dolphins Plus was found to be completely different than what the students assumed it would be.

"I would have never gone out of my way to go to Dolphins Plus, but I really enjoyed that experience. It was out of my comfort zone and I thoroughly enjoyed it," said Claire Schoemick, a sophomore biochemistry major.

Dolphins are within open ocean enclosures and experience plenty of activity. The organization's mission statement reads, "We are committed to providing guests with the chance to interact and share unforgettable moments with dolphins to foster a greater appreciation for our oceans, the creatures that inhabit them, and the importance of marine conservation."

Dolphins Plus is accredited by many marine organizations and also provides training to those who wish to learn how to help stranded marine animals.

The students got a two-hour, hands-on training session with an experienced marine rescue responder.

Another aspect of the trip many students found fascinating was a visit to the Turtle Hospital in Marathon, Florida. At the nonprofit organization, sea turtles are rescued, rehabilitated, and then released. The turtles face a variety of adversity in the oceans, including consuming trash and entanglement in ropes, lines or garbage. Turtles are also often hit by the increasing number of boats in the Keys.

These impacts can result in a syndrome known as "bubble-butt syndrome" which researchers believe may be caused by, "a combination of air that gets trapped, damage to the lungs and muscles surrounding them, and nerve damage," according the Turtle Hospital.

These inflations of the shell cause the turtle to float on top of the water, and so they must become permanent residents at the hospital to stay away from the harm that would cause them if they were in the open ocean.

The students said they were astounded at the dangers sea turtles face, and what majestic creatures they are. The nonprofit hospital is extremely active with the work it assists with, as well as with visitors wishing to view and help the turtles.

The students left the hospital wishing to help in some way (besides financially by their visit).

Later, while tide pooling at the beach, several students initiated a small beach cleanup. As they walked the beach, they picked up all the plastic and garbage that they could.

They found that even this was an astonishing amount.

"I loved that fact that we all contributed to the beach cleanup and helped out the environment," Fura said.

"This ecology trip not only brought new knowledge to me that will benefit my education further in life, but it also increased my skills to work outside the classroom and apply that information in the outside world," said Tori Berkhout, a freshmen environmental science major.

Many of the students said the ecology trip brought new light to different paths they could take with their degrees after graduation.

The students will edit the videos they filmed to produce documentaries on certain topics they delved into during their trips. These videos are their final projects for the field ecology class. Daily video blogs will be posted to the Niagara field ecology Facebook page. 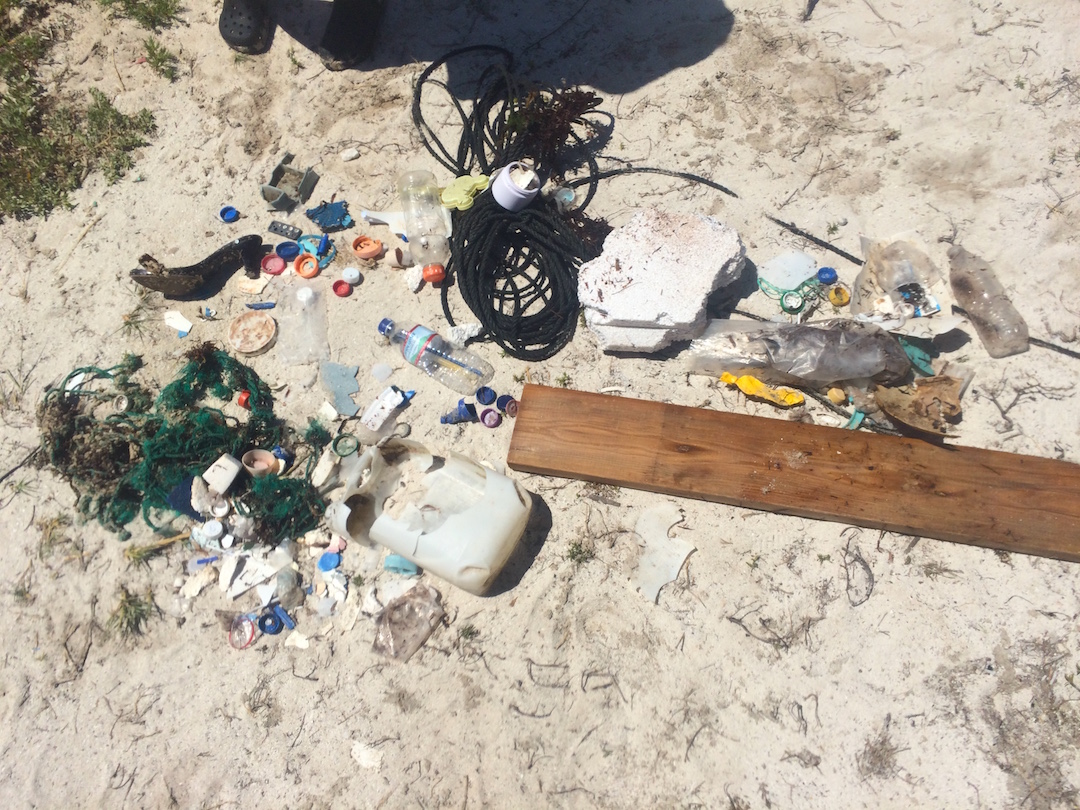 The result of approximately 20 minutes of beach cleanup by the ecology students at Bahia Honda State Park.