The NHL playoffs are in full swing. One team that isn't in these playoffs for the sixth consecutive season has many difficult decisions to make.

Tim Murray, general manager of the Buffalo Sabres, has some mistakes to answer for. He recently signed a large contract extension in hopes of delivering at least a playoff appearance for the 2016-17 season, that didn't happen.

The Buffalo Sabres are known for having one of the most loyal fan bases in the whole league. To deliver the way they have in recent memory is anything but exceptional. High television ratings, a dedicated fan base, but the fuse is getting shorter. The last time the Sabres were even considered contenders has hit the decade mark this season and people aren't content. Failed mid-round draft picks, free agent busts, and port trades have put the Sabres in the second longest playoff drought out of all 30 teams.

Jourdan Labarber, Buffalo Sabres news writer, said, "Murray addressed the reasons for that disappointing season, but he also touched on everything from the coaching staff, team leadership, his opinions of the organization's young players and the potential for new contracts for Brian Gionta (an unrestricted free agent this summer) and Jack Eichel (eligible for an extension beginning on July 1)."

The only team with a longer playoff drought is the Carolina Hurricanes, also known as the team that beat the Sabres in the semifinals and went on the win the cup in 2006.

There will be clarity shortly though.

The 31st team to enter the NHL, the Las Vegas Knights, have to take one player from each NHL team. Depending on who they take from the Sabres will answer plenty of questions and will hopefully put the Sabres more on track for who to take in the draft.

Joe Martin, fan of the Buffalo Sabres and a student at Niagara University, said "The Sabres need to take a defenseman."

Most analysts and statistics would agree, considering the Sabres gave up the most shots on goal per game in the league. That doesn't equate to playoff participation, let alone playoff success.

The NHL is a cyclical league; there is a salary cap, and there are no super-teams like the NBA and NFL. Good news for Sabres fans, but how long is too long? Patience is a virtue, but how much is too much? Sabres fans deserve more than what is being given to them. The team hasn't been taken seriously for six years.

The Buffalo Sabres have very recently fired their coach and GM, both of whom had attainable expectations set upon them and failed.

The Sabres rebuilding theme is titled "The Next Chapter" and many chapters have been around since the team's creation in 1970. Out of every chapter, none has produced a Stanley Cup and only two have Stanley Cup Finals appearances.

Hope is a reoccurring theme with not just the Sabres, but the Buffalo Bills as well, and that's about all Buffalo has. Hope is one thing, production and results are another. The Sabres are walking around with little direction and a president who is much more of a football fan than anything else. Stability, planning and organization are necessities to make a modern dynasty, e.g. Chicago Blackhawks and Los Angeles Kings.

Tim Murray is gone now, so how many more chapters do the Sabres have to go through before they find success? 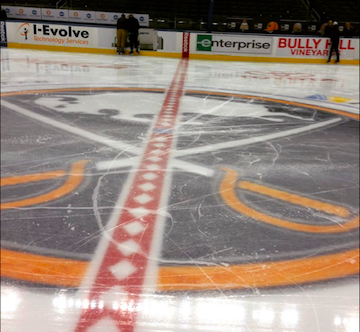 Most fans of other teams believe they are in a better situation than the Sabres.

George Lodick, a fan of the Edmonton Oilers, when asked about the Sabres missing the playoffs, said, "I feel that's good for me since I'm a Penguins and Oilers fan."

Buffalo is a sports city tormented with mediocrity and missed inches, this translates to a fan base that certainly doesn't take losing for granted, and when winning is attained, it gives pride and honor to the friendly neighbors on Lake Erie.

The Sabres actually finished with fewer points than the year prior, which is where the disappointment really comes into play. At the beginning of the season, the Sabres were shooting for at least 90 points. Instead, they had to settle with 78 and finish in last place in the weakest division out of all four divisions - and second last out of 16 teams in the Eastern Conference. The Sabres finished fifth, last in the league and will most likely pick sixth in the NHL Draft, with Las Vegas having equal odds at first as Arizona. 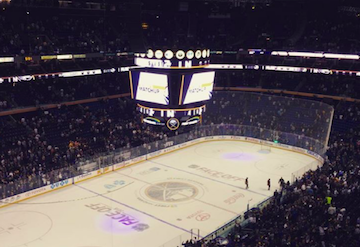 There is hope for this middle-aged franchise however. The pieces are certainly in place for a successful rebuild.

Joe Martin, a Niagara University roller hockey player, said "I feel they are headed in the right direction, with the firing of Tim Murray and Dan Bylsma."

The Sabres have had a lack of structure since the firing of Lindy Ruff in 2013 and haven't quite recovered from that tumultuous day. The Sabres have a few young prospects and have plenty of young players to grow around. They also have veterans who may be trade bait for future draft picks.

Eichel, viewed as the savior from North Chelmsford, has expressed his aggravation with the media on multiple counts as he should have. All Eichel knows is success, being the first freshman to win the Hobey Baker Award (hockey's Heisman) since Paul Kariya. He has had the floor for two seasons now and certainly hasn't disappointed.

The Robin to Eichel's Batman, Sam Reinhart has been average at best without Eichel, but shows signs of greatness with Eichel.

Rasmus Ristolainen is a minute cruncher and has had plenty of personal success, no matter how poorly the team has done. He has shown flashes of being a future Norris candidate. Ryan O'Reilly is a former Selke winner for best two-way forward and is the perfect definition of a classic hockey player with a perfect combination of determination, grit and skill. The boys, the fans and the city will be all right in due time.