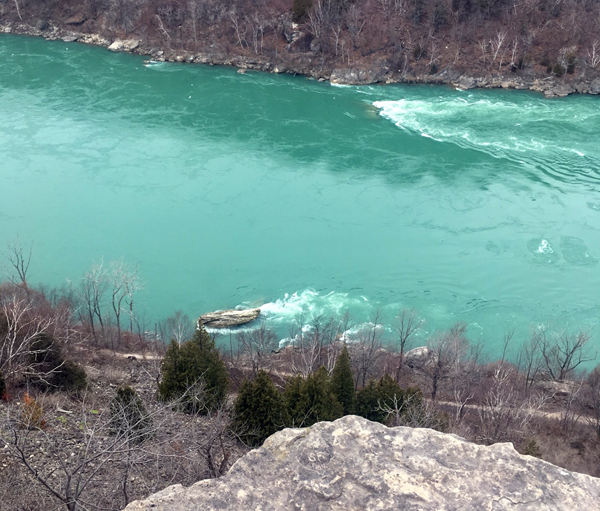 A sunny day on the Niagara Gorge Trail in Niagara Falls.

Earth Day, April 22, is meant to be a day to spread awareness. According to the Old Farmer's Almanac, the most common way to spend Earth Day is to plant trees. Spreading awareness and being active have been the main goals of Earth Day since the very beginning.

In the 1970s, there was a Wisconsin senator named Gaylord Nelson. Imagine a massive oil spill off the coast of Santa Barbara, California. When an oil spill occurs, the oil spreads thickly over the top of the water. The inky, black mess coats birds and mammals, killing or injuring them. It doesn't take much to cause this sort of damage.

Being coated in oil will certainly stop a bird from flying, stranding them, but even a little bit of oil can destroy their natural water-proofing and insulation. This means the birds can suffer before they die.

It was an event such as this that pushed Nelson to make the protection of the environment a political issue. This was the birth of the modern environmental movement. The national level was astounding, but, in 1990, the holiday became global. Nelson was able to mobilize people from 141 countries, gathering like-minded people in their quest to save the planet.

One project specifically dedicated to planting trees is from the Earth Day Network. This tree-planting initiative has grown to become The Canopy Project.

In the Buffalo and Niagara regions, there are many groups who share the goal of conserving the environment. One specific group is the Buffalo Niagara River Keeper. This group is all about protecting and conserving the Great Lakes and connecting people with water.

One project its members work on is the Buffalo River Restoration Project. This project aims to limit the damage done to the river. According to Buffalo Niagara River Keeper, the challenges the river faces include contaminated river sediments, poor water quality, a lack of public access, and insufficient fish and wildlife habitat. This project, which partners with several private entities, hopes to address all of these environmental issues as well as transform the river into a beneficial environmental, economic and community resource.

NU Goes Green is a club at Niagara University. The club's main focus is to help the campus and its students become more environmentally friendly. Members are currently increasing their presence on campus by holding events and hanging posters throughout campus. They are currently trying to get the sustainability committee to fund recycling bins, according to Madeleine Ross, president of NU Goes Green.

1. Go meat/beef/dairy free for one day a week.

2. Turn off the lights and unplug your phone charger when you aren't home/using them.

3. When getting coffee in the mornings from Tim Hortons, bring your own reusable coffee mug, or just recycle the cup from when you order. Most people simply throw them out, but they are, indeed, recyclable.

4. Know what is and isn't recyclable.

5. Ride a bike if you don't have too far to travel.

Aundrea Rogers, the current vice president of NU Goes Green, says, most of all, "Have a voice."

If you don't speak up, you won't be heard. The only way to make a change is to speak up.

We need to take care of the planet so future generations can enjoy it as well.

Another local conservation group is the Nature Sanctuary Society of Western New York. This group acquires, owns and manages land in order to conserve native plants and animals in their habitats, according to it's website. One of the properties they acquired is named "Sweetland." This five-acre land is located in Cattaraugus County. It is on the south branch of Cattaraugus Creek. This section of land is home to several species of trees that were present in pre-colonial times. One of the most prominent features of this creek is the 18-foot waterfall aptly named Sweetland Falls.

According to the Merriam-Webster dictionary, conservation is the careful preservation and protection of something, especially: planned management of a natural resource to prevent exploitation, destruction, or neglect.

Conservation is all about taking care of the planet that we live on, so that it is still safe for future generations. Conservation International has a quiz that will show how much you truly know about conservation.

There are little things the public can do every day in order to conserve. Not everything has to be a big gesture. Here is a small list from conservationcubclub.com.

Americans consume 8.6 billion gallons of bottled water per year. 40 percent of this water is actually tap water, and it takes 17 million barrels of oil to make the plastic bottles. Only one out of five water bottles is recycled. Instead, use a reusable water bottle.

Change to CFL bulbs instead of fluorescent light bulbs

CFLs use two-thirds less energy than standard fluorescent bulbs, and they last longer.

Cut down the use of pesticides on gardens and lawns. The bees and bugs need to be protected.

Use reusable bags in stores

Plastic bags make up a large portion of landfills. They are also the most frequently found item littering roads, beaches, sidewalks and vegetation.

One event being held this Earth Day is an Earth Day Volunteer Clean-up. It is happening in Angola on April 22. Kimberly Bartoszewicz started this event on eventbrite.com. She will be providing garbage bags to pick up trash on the beach as long as the weather stays nice. The event starts at 9 a.m. and will end at noon.

An Earth Day event happening in Rochester is Hikyoga. The group will travel to Durand Eastman Park and hike the trails while stopping every so often for some yoga. The event will be held from 10-11:30 a.m. The park is on Zoo Road, off Lakeshore Boulevard. Dress appropriately fro the weather, since the event will be happening in rain or shine. If the weather does get unmanageable, a rain date will be provided. Tickets are $16 and can be purchased at the link on eventbrite.com.

Coral reefs die in a process that is known as bleaching. Coral bleaching occurs when corals release symbiotic algae that lives in their tissues due to stress, causing them to turn white, according to the National Ocean Service's website. Without the algae, the coral has lost a major food source and it is more likely the coral can catch diseases. Some causes of coral bleaching include a change in ocean temperature, runoff and pollution, overexposure to sunlight, and extreme low tides. Coral can survive a bleaching event; when they turn white they are not dead yet. However, they are under stress and more susceptible to mortality.

Sharks usually get a bad reputation, but they actually play an important role for the environment. They are the top predators of the ocean ecosystem. They help keep the ecosystem in balance.

According to Shark Savers, sharks tend to go after the sick, weak and slow fish, keeping the population healthy. It may seem strange, but sharks actually protect some habitats in a way.

The reason it's important to pay attention to sharks now is because they are being killed off for their fins to make shark fin soup. This food has cultural value, but it is not essential to human health. It is a symbol of status in Chinese culture.

Shark finning is the practice of just taking the fins off a shark and leaving the body. The fins are worth more than the body at $500 a pound, according to Ocean Portal. The finned sharks a thrown back into the water while they are still alive. These poor creatures will not die peacefully. Due to the loss of their fins, they cannot swim properly and will suffocate if they do not bleed out first.

Earth Day should only be the beginning to starting to care for this planet. It was originally started to raise awareness, which still needs to be spread. As a collective whole, we need to start taking care of our planet to ensure its continued health in the future. This is the only planet we have, so we have to take care of it.