Honorary Relay For Life survivor Mark Gorton, 43, enjoys playing the role of pirate, which is this year's theme for the June 9 event at Veterans Park.

"It was great at the kickoff event because I'm a goofball, and I love telling the pirate jokes that (co-chair) Lynn Dingey had in the script," he said. "I like to do imitations and calling up my inner pirate. Every year, the committee does a great job in making the themes fun and this one does a great job in bringing out the kid in us."

Gorton is now cancer free. He said that his cancer journey began in 2004, when he was between jobs. He had worked for the Buffalo Sabres for a season, produced television shows and intermission updates. A sports fan, Gorton had worked at various sports-related broadcast jobs, including working for seven years for the Empire Sports Network. Gorton said that he and his wife, Debbie, noticed that they seemed fatigued. 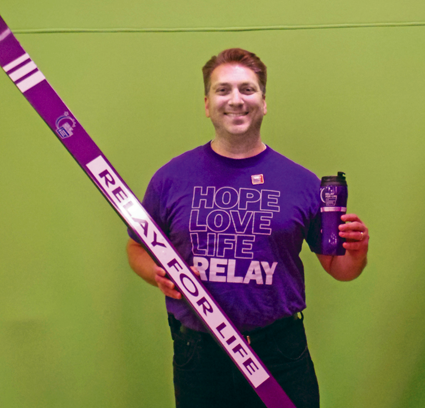 "I was just going to the primary doctor for a routine physical," he said. "My wife and I were asking about general fatigue, thinking that our thyroid levels were a little bit off. As part of routine checkup for thyroid, the general doctor, Dr. Leone, stood behind me and started feeling around my neck. He said, 'Oh that's interesting.' I had no symptoms, no problems, no swelling. I never felt sick. He told me to look in the mirror when I swallow and said that I would see a little bulge at the bottom of my neck that's not my Adam's apple. That's what started the process of finding out that I had a cold nodule. At the time, the research said that that there was a 50-50 chance that the cold nodule was cancerous. They weren't even testing to see if it was cancerous. They would find out at the surgery," Gorton said. He went to Sisters of Charity Hospital in Buffalo for the surgery, which was performed by Dr. Mohamed Razack. "He was called the 'Thyroid King' because he performed so many surgeries and was an expert in thyroidectomies," Gorton said.

Because the cold nodule was malignant, Gorton's thyroid was removed. "I came out of it fine. Officially, they said, 'You did have cancer, and it was contained.' They did not prescribe either radiation or chemotherapy."

"I was very fortunate. I experienced no hair loss and no weight loss," Gorton said.

Over the years, Gorton continued to be tested to make sure that he didn't experience a recurrence in his cancer.

He went back to focusing on his career. Shortly after recovering from surgery in 2004, he got a job with Ingram Micro as a software licensing specialist. "It was completely out of my field, but it was a job. It was actually a good place to work." By August 2005, Gorton started working in his current job as an audiovisual technician for the Grand Island Central School District.

"I love this job. I love working with people; the staff in my technology office is great. The teachers, the support staff, the administration, and the Board of Education work together as a team to do the best that they can to educate our children, not just on the academic part, but on how to be good people in general," Gorton said. Gorton was involved in sports journalism since he started as a part-time sports producer with WKBW-TV Channel 7 shortly after he graduated from Buffalo State College with a Bachelor of Arts degree in broadcasting and communications in 1995. He particularly enjoys announcing football and baseball games for the high school. In 2007, however, his career was nearly derailed.

"X-rays showed suspicious lymph nodes in the area where the surgery was done. They didn't know if it was just scar tissue or if there were any cancerous cells that were forming and hadn't been cleaned out," Gorton said. The concern was that, when Gorton underwent a second surgery, his vocal cords could be nicked. "Without my voice, I feel that I would lose my identity. There is always a danger when they go into the area for a second time. There is a risk that, because the thyroid gland is not there, something else could get hit in the process of cleaning out."

Razack had retired and Gorton decided to seek a second opinion. He said that he spoke to several doctors and then decided that he felt most comfortable with Roswell Park Cancer Institute, which is where he had his surgery. "It was May of 2007, when I got my second surgery. They cleaned out 10 to 13 lymph nodes and they said that one was suspicious, but never anything that they felt needed radiation or chemo," Gorton said.

Since then, Gorton has been cancer free. He said that, through his ordeal, he has been grateful for the support of friends and family, including his wife and his two daughters, Sara, 15, and Jenna, 10. Former Relay For Life Co-chair Becky Sommer-Stufkosky asked Gorton to join Relay For Life in 2010, as the emcee for the annual kickoff rally.

"When I first joined Relay, I didn't mention that I was a survivor because I didn't feel that I suffered enough. I've been so blessed to be involved into this Grand Island Relay For Life family through Becky, Lynn Dingey, Candy Mye, and Missy Stolfi. They are the Fab Four of the Grand Island Relay, and I know there are so many others who contribute to this cause of fighting cancer. They are the ones who brought me in and have really treated me with such love and honor. I am truly touched that they would consider me as an honorary survivor."

Gorton said that he intends to start his own Relay For Life team, which will be called Team Gorton. He added he admires the other member of the Dynamic Duo, Matthew Eggers, age 7. "I really want all of the attention to go to Matthew. What an amazing kid he is. I met him at one of Huth Road's family game nights and, ironically, I went to high school with his mom. It wasn't until the kickoff event that I heard Matthew's story. Matthew inspires me and I am honored to be joining him because he and his family deserve the focus that I feel I do. At the kickoff, when I mentioned his name, he gave the thumbs up."

Hope is alive, Gorton said. He said that he would tell people newly diagnosed with cancer, "Try to keep as positive as you can. We live in an area that's very fortunate to have some of the best doctors and treatment and research facilities. Get knowledgeable about what you have before you worry about worst-case scenarios. The other thing that I would say is to lean on those closest to you. Don't be afraid to ask for help and know that, here on Grand Island, you have a group like Relay For Life and the American Cancer Society. We are in your court. It's all about showing you love and support. Know that you are not alone. We will fight this journey with you."