Matthew Eggers, 7, one of the Relay For Life's two honorary survivors, is a young golfer.

"Golf is really fun," Matthew said. "I can get outside and smell the fresh air. I can hit pretty far. I like to get the ball in the cup. That's my favorite sport."

One of the residual effects of the Birkitt's lymphoma that Matthew was diagnosed with at 5 is foot drop, a condition that causes the person to drag the front of the foot when walking.

"We play golf because it is a form of exercise that he can do in the summertime. Baseball, hockey, physically active running sports, we are trying to stay away from until we know that his leg is getting better and getting healed. Golf isn't that exertive on the leg," said Eric Eggers, Matthew's father, who works in IT at Praxair.

Two years ago, Matthew appeared to be a healthy 5-year-old boy. He was living with his parents and his older sister, Chelsea, then 17. His oldest sister, Kayla, then 22, was living in Tennessee. A kindergartener at Sidway Elementary School, Matthew was a member of a baseball team. On the first day of the 2015 season, however, he was having difficulty playing. His mother, Tracy Schmidt, said, "We had trouble keeping Matthew from sitting in the outfield during the game. He kept saying that his leg was hurting way too much and that he couldn't stand."

Schmidt said that Matthew's health issues were just one of many things that occupied her attention. She was helping her mother, who had just, a month earlier, been diagnosed for the second time in 12 years with breast cancer. In addition, Kayla was expecting a baby. 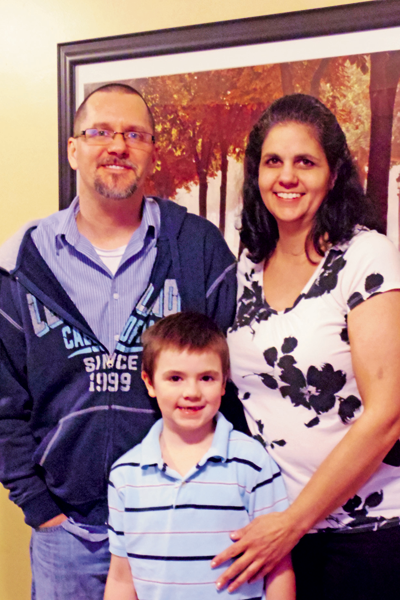 "It was Holy Thursday," Schmidt said. "My mother collapsed in the bathroom. We took her to the hospital. We thought that she might have pneumonia. After she came out of the coma and they were able to drain her lungs, that's when we saw the cancer, which had metastasized. It was very hard. We were trying to find a nursing home or a live-in care facility that could take care of her, and during the time, Matthew started showing signs of cancer himself."

After the baseball game, Schmidt and Eggers took their son to Dent Neurological Clinic. They were told that Matthew might have shin splints or bone spurs. "Sunday was Mother's Day. We had a special ceremony in St. Stephen's old church. Matthew was part of a children's procession. When he got to where we were sitting in church, he sat down. He couldn't make it up to the altar," Schmidt said.

The next day, Matthew's parents took him to his doctor, who referred them to an orthopedic doctor at Women and Children's Hospital in Buffalo. "When we were driving from the doctor's office to the hospital, Matthew started having what I thought was a panic attack in the back seat. He said that he couldn't breathe; he was nervous and tried pulling his seat belt off," Schmidt said.

Schmidt said that she worked at calming her son with breathing exercises. In the hospital, the symptoms returned. "I found someone in a white coat who, I assumed, was a doctor and I said, 'You have to look at him.'" Matthew was sent to the ER. Testing revealed the presence of two masses: one on his spine and the other surrounding his windpipe. Matthew was immediately admitted to the pediatric intensive care unit.

Medical personnel "needed to biopsy the tumors to find out what type of cancer he had, but they were afraid to move him because, if they laid him on his belly, gravity could close off his windpipe altogether."

Eric described the procedure as "very difficult and risky. They biopsied the tumor on his spine because that was the only one they could get to. They were able to tell us that Matthew had Birkitt's lymphoma. The good news is that it is easier to treat. It is more receptive to the treatment plans that they have in place.

The cancer, Schmidt said, has "an 80 percent success rate with treatment. It was good because it wasn't leukemia, which is a more problematic one." She said that Matthew's two oncologists, Dr. Bambach and Dr. Bhatti, were excellent. "They said that, if Matthew had rolled over on his tummy, he might not have awakened."

"We were at Children's for about six weeks," Schmidt said. "We were sent home for one week and then did two weeks on and two weeks off at Roswell Park Cancer Institute, where Matthew received 12 rounds of chemotherapy. We were there at the hospital day and night with Matthew."

"I think it brought us together as a family. Chelsea was at home with us, and Kayla came home," she said.

"We had good care at Roswell Park," Schmidt said. The family got support from Carly's Club and from Camp Good Days and Special Times. Carly's Club brought members of professional sports teams, including the Buffalo Bills, Buffalo Sabres and the Buffalo Bandits, to lift the kids' spirits. Eric said, "It just so happened that was the year that the Sabres drafted Jack Eichel. They knew that we were big Sabres fans. They asked us if Matthew wanted to meet Jack. So basically it ended up that Matthew had a one-on-one with Jack."

The meeting resulted in a friendship between Matthew Eggers and Eichel. "For his sixth birthday, on Sept. 23, I was able to get Jack to sign a jersey for him. I ended up by getting tickets for the season opener. Theresa from the Sabres organization asked if we wanted to go into the locker room. They knew about Matthew. It just happened that Jack scored his first NHL goal that night, so she took us into the hallway, waiting for players to finish the press conference. Jack asked if Matthew wanted to take a picture with him so they took a picture. Each time they saw each other, the bond just grew stronger."

Matthew had his last treatment on Dec. 23, 2015. "I went into the nursing home and told my mom that he'd completed his treatment and, at that time, the scans showed that he had no more tumors, and blood work showed that there was no sign of cancer. By New Year's, she was off, and it went down from there. She passed away on Jan. 11, 2016," Schmidt said.

Now a second-grader at Huth Road Elementary School, Matthew's cancer is in remission. His immune system has not yet recovered, and he receives weekly injections to boost it.

Matthew's niece, Savannah, is now 20 months old. "She keeps me going. I am a very proud grandmother," Schmidt said.

The family looks forward to Relay For Life on June 9 at Veterans Park. "Matthew is very excited about the pirate theme. It's a boy thing," Schmidt said. She and Eric said that they are happy that Mark Gorton is the other honorary survivor. "Mark is a kid at heart. Matthew is the smaller version of Mark. Mark is such a nice guy, and he talked about his journey and that he thought that he didn't suffer enough. It doesn't matter. Once you are told you have cancer, it changes everything, no matter what kind of treatment you go through to get rid of it," Schmidt said.

When asked what he would tell other children who have been diagnosed with cancer, Matthew said, "Never give up. Don't let your dreams only be dreams." His father added, "They will only be dreams if you don't make them come true."

"We represent hope that you can fight it," Eric said.

"Please don't be afraid to reach out for help," Schmidt said.