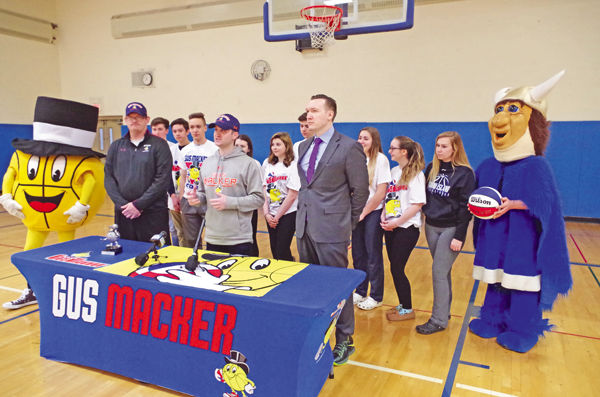 Corey McGowan announced registration has opened for the 2017 Gus Macker 3-on-3 Basketball Tournament, which will take place June 10 and 11. (Photo by Larry Austin)

Registration has officially opened for the three-peat Gus Macker 3-on-3 Basketball Tournament on the Island.

McGowan made the announcement during a press conference at Grand Island High School attended by representatives of the Grand Island government, school district and business community, as well as Noah Williams of the national Gus Macker organization.

"Really excited. This is year 3 under our three-year contract. So we started this in 2015 really opening Grand Island to the rest of Western New York," McGowan said. He added that a goal at the time of bringing the Macker to the Island was to literally and figuratively bridge the gap between Niagara Falls and Buffalo.

"The idea is to drive more traffic to Grand Island and we've seen that in the past two seasons. Our numbers have been up over the past two years, we've continuously grown, and we're looking to that for year No. 3," McGowan said.

"Grand Island's really set the tone and set the stage for these other organizations to come in and run a Macker," McGowan pointed out. "So we're really proud to have done that. Grand Island has become a great home for this tournament."

Town Supervisor Nate McMurray said he hoped all of Western New York would visit to see the tourney.

"The last two years have been such a success. It's more than just a basketball tournament. It's really a celebration, a festival," McMurray said.

Williams called the previous two Gus Mackers on the Island "a great experience here." He said the original Macker took place in 1974 when 18 boys in Lowell, Michigan, each put in $1 and played a 3-on-3 tourney "in Scott McNeal's driveway."

"Nothing more than a bunch of buddies playing," he called it.

The tourney was located in the City of Buffalo for 22 years before moving outside the city.

"Then Macker was essentially done in Western New York because nobody really wanted to touch it anymore, which really didn't make any sense to me because, after a 20-year legacy, it needed to stay here," McGowan said. He said he pushed for the Island to step in and host the event.

The tourney is now in its 44th year and is getting an update thanks to technology. Williams said that new to the tournament this year is an app that will supplement the large paper and ink bracket board and schedule that is posted at the tourney. Williams said anyone can go online and download the Gus Macker app to follow the play via the web.

"So instead of running to the bracket board all weekend, you can just pull it right up on your phone," Williams said. "If you play your first game and you want to go out to dinner with your family or something like that, you know what's going on on your court all the time."

The app made its debut at a tournament in Michigan recently, "And it worked perfect," Williams said.

Future plans for the Island basketball tournament include renewing the contract for another three years and holding another "bookend" Macker tournament at the end of summer locally, McGowan said. McMurray said there is demand for another tournament, rather than holding one bigger tourney. "Keeping it small has allowed us to really have great security, great management of resources," McMurray said. McGowan added many local groups, such as the Grand Island Chamber of Commerce, town and school district make the event happen.

McMurray said, "We didn't want the Macker to take away from local business and we also wanted to help local business." He said food businesses in proximity to the Macker on the boulevard benefitted greatly from past tourneys, and the goal is to think of more creative ways to leverage the crowd the tourney draws.