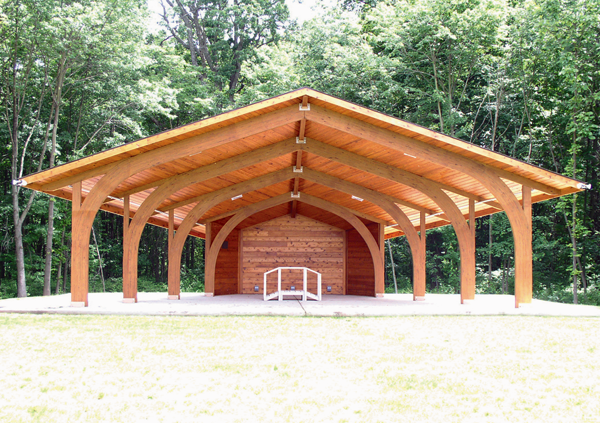 Shown is an example of the same model of bandshell headed to North Tonawanda. (Photo courtesy of Cedar Forest Products Co.)

North Tonawanda will soon be home to a new bandshell that is planned to host various forms of entertainment along the water at River Road's Raymond Klimek Veterans Park.

The project is predicted to cost roughly $150,000. Of that total, $90,000 will come from Niagara River Greenway Commission funds, while the remainder will be taken care of by the city.

Michael Zimmerman, community development director for the City of North Tonawanda, helped secure the Greenway funds for the project.

Zimmerman said bringing the bandshell to North Tonawanda is part of "the city's larger vision of trying to really engage the waterfront and get residents and people active on the waterfront as much as possible. Our waterfront is obviously a jewel and any way we can use it and get more people to utilize it the better."

The open-air bandshell will be constructed close to the Niagara River's shoreline, facing the roadway, so the audience can view the stage against a backdrop of the water.

The bandshell will be constructed mainly of wood, with a solid back and open sides for a maximized view of the river.

The back portion of the bandshell will serve as a storage area for production equipment, including microphones, chairs and lights.

The bandshell may be available in time for the summer season, said Patricia Brosius, North Tonawanda youth and recreation director.

"We would love to have it up and going this summer," she said. "That's our goal, but I can't guarantee how fast this is going to go."

The bandshell will eventually serve as the new stage for the annual "easy listening" summer concert series at the park, as well as other many other possible uses.

North Tonawanda Mayor Arthur G. Pappas said the new bandshell will "allow us to put on our concerts, plus plays and also maybe even ongoing movie nights," and several other forms of entertainment.

"There's a million different ideas that we've come up with," Brosius said.

Some of the other activities that may be hosted at the bandshell include exercise classes, paint nights, a speaker series, poetry slams, open mic nights, music and dance recitals and theater projects.

"There's a couple of different theater companies that we would like to come down," Brosius said. "Maybe they can do rehearsals and they can do productions down there."

Brosius said the Youth Center is also looking into ways to attract younger people to the bandshell by possibly hosting karaoke events or outdoor dances with DJ entertainment.

"We really do have some new, different ideas," she said.

Brosius said the new permanent-structure bandshell will replace a portable trailer stage that has been used since 2003.

He explained, the new structure will offer a variety of uses the current stage "just isn't made for. It's just getting too old."

With "all the programs that we're going to be able to offer now, for residents and nonresidents, it's going to be wonderful for everyone," Brosius said.