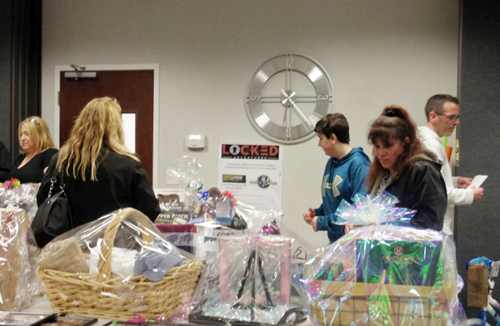 Browsers check out the baskets at a raffle fundraiser held by Fresenius Kabi of Grand Island. (Photo by Alice E. Gerard)

Fresenius Kabi, the Grand Island pharmaceutical company that was awarded Relay For Life's Crystal Award for sponsoring the survivors' tent and the Emerald Award for fundraising efforts, raised $19,075 at its annual basket raffle, held March 31 at the German company's Staley Road plant. The basket raffle has been an annual event since 2004 for the company, which employs 1,005 persons.

According to AnnMarie Salviski, who works in the training and development department, "The people who work in this plant are very giving. It's amazing what the people at the plant are willing to do and willing to donate. We offer gifts to the best basket and most creative. It's fun." This year, staff members put together 106 baskets. Putting together the baskets is a two-month long project, Salviski said.

"We have fun with this. We are helping the community and the American Cancer Society," Salviski said. She explained that the basket raffle came at a good time, as the FDA had just completed an audit. She acknowledged that, although the company did well, audits are stressful. "The raffle is a time for relaxation, and the employees look forward to it," she said.

Salviski said that employees work hard on their projects. One employee made a convergence angle cutting board. Another employee, originally from Ethiopia, made a traditional Ethiopian dress. Yet another basket featured a slice of life at the Fresenius Kabi plant. It's a Barbie and Ken doll dressed up as filling and capping people who have to gown to enter the aseptic complex. Fillers, who wear blue gowns, put the medication in vials, and cappers, who dress in white gowns, put stoppers into vials and check the crimps that go over the caps, keeping the caps in place.

Salviski said that the dolls portray the safeguards that ensure the sterility of the company's products.

"When you take drugs, you want to know that we are taking steps to make sure that it's a quality drug that you're getting, especially if it is a liquid form. You want to have a comfort level that everything is done correctly. These people here go over and above to make sure that we have a quality product coming out of our plant."

Both Relay For Life and high quality medications are things that Salviski said are very important to her personally. She was diagnosed with stage III breast cancer in 2003. In January 2013, she experienced a recurrence. She was named Relay For Life's honorary survivor in 2013. She said that she is happy that "I survived and that I am a part of the reason that somebody else is surviving. What we're doing is raising money for more research so that maybe one day there is a cure. We're making a bigger impact, whether it's us raising the money or by the oncology drugs that we're working hard to make."

Salviski said that Relay For Life holds personal meaning for the employees. "We lost a gentleman in the formulation department. It was very sad. He was our most recent loss. Through the years, including myself, we've had several employees going through treatment, and we always try to do something for the employees within the department." Lisa Dudley is another Fresenius Kabi employee who has survived cancer. She was Relay's 2008 honorary survivor. In 2016, she was part of a 2016 caregiver/survivor team with her mother, Grace Aswad. The other caregiver/survivor mother-daughter team that year was Sarah and Natalie Stanczyk.

Fresenius Kabi does other fundraisers for cancer-related causes during the year, including a golf tournament, which was started "because someone from our lyophilization department (freeze dried drugs) passed away. A year after Bill Feritto passed away, one of our supervisors, Pat Hogan, passed away. Ten years later, it is the Feritto-Hogan golf outing," Salviski said. The money that is raised has gone to fundraisers, such as Ride for Roswell and to Relay For Life. Sometimes the proceeds go to the families of employees stricken with cancer.

"Relay For Life is our biggest fundraiser. It's our most important and the one we concentrate on the most all year," Salviski said.