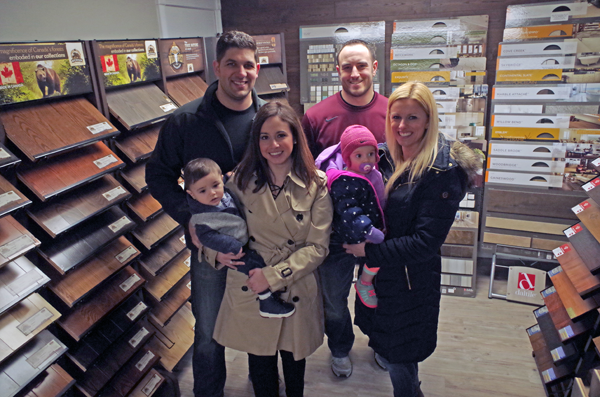 Great customer service doesn't hold hours of business, it's 24/7, said Eric Fiebelkorn, president of the Grand Island Chamber of Commerce, Saturday during a ribbon-cutting and grand opening for the newest Island business.

Mike Antonelli and Paul Hinderliter have partnered to form Nickel City Hardwood at 1870 Whitehaven Road, in the brownstone office building across from the Island Ship Center. The Grand Island Chamber of Commerce welcomed the business, which focuses on beginning to end service and marketing of all things flooring: hardwoods, luxury vinyl, tiles, carpet, etc.

"We're just trying to focus on Grand Island and the community," Antonelli said.

Nickel City Hardwood is open by appointment only.

"This is really our second career. We both have full-time jobs in addition to this," Antonelli said. Antonelli works in education, while Hinderliter is in law enforcement.

Rather than restrict business, appointment-only appeals to a lot of people, the partners said. "So far, overwhelmingly, people have really enjoyed appointment-only because most people want to meet with you at night or on a weekend because they work during the week," Antonelli said.

With all the options, prices, and installation options available when shopping for flooring, "You really need someone to sit and spend some time with you, so that makes sense to me," said Fiebelkorn. "I would rather know that I have someone one-on-one instead of fighting 10 other couples who are all there between 5 and 7 when they have time available every day,"

Fahim Mojawalla of the Island Ship Center across the street will help Nickel City Hardwood service contractors who need to pick-up during regular business hours.

"So having Fahim across the street has really allowed people to pick something up at 8 o'clock in the morning when we're not here," Antonelli said. "I think that partnership from day one has helped us too."

"I'm from the Island originally," Antonelli said of choosing the Island for the business. "There used to be a flooring company on the Island. There isn't anymore and there's a lot of houses being built. ... So it seemed like the right place to for us to give it a shot."

This is the first business venture for both men, though Antonelli's parents are longtime business owners.

Both Antonelli and Hinderliter did some construction in their younger days and "saw the opportunity in the market" on the Island to open a business of their own, Antonelli said.

"We also talked about how it would be nice to bring quality to the area in products," Hinderliter said. "Our quality and price point, you're not going to beat it. So that came into play too when we decided to open."

"We're carrying only high quality and our prices are extremely competitive," Antonelli said of their product line. "We've reached out to a lot of local contractors hoping we can make some partnerships with them as well."

Mojawalla called the partners "very well connected on the Island. That's a huge plus. They've got an awesome relationship with the small businesses on the Island." Many of those same members of the business community, as well as friends and family, were on hand for the opening. "It means a lot," Hinderliter said of the gathering at their ribbon-cutting and grand opening. "We have a lot of support from family, friends, and a lot of people we don't know. ... The community's supporting us so far." 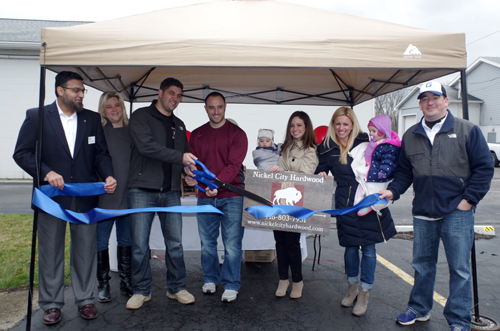