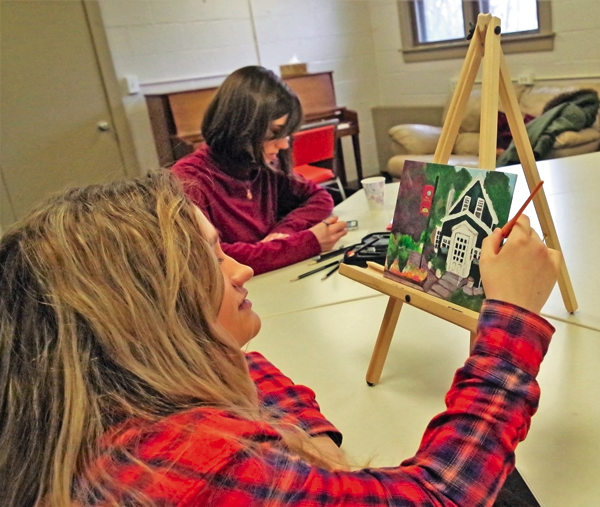 Alexa Mallare works on a painting of the Village Inn, owned by her uncle, Mike Carr, and where her mother works. She finished the painting, a gift for a family member, Saturday while at the new art studio in the Nike Base Park.

The Town of Grand Island Recreation Department, in collaboration with the Grand Island High School Art Club, has a new art studio on the drawing board.

Joe Menter, the town's recreation supervisor, announced recently the creation of an art space at the Nike Base Park on Whitehaven Road. The Rec. Department will have a grand opening April 22 from noon to 5 p.m., with a ceremony at 2 p.m. to officially unveil the studio.

The opening will coincide with a "Bubble, Brunch and Bingo Fundraiser" at the Golden Age Center, 3278 Whitehaven Road, next door to the studio. The GAC event, a fundraiser for the Island Meals on Wheels program, will run from 11 a.m. to 2 p.m. Tickets are $10 and will include brunch, punch (bubbles), bingo and raffles.

In establishing an art studio, Menter collaborated with GIHS art teacher and Art Club advisor Cindy Wynne. Wynne said Menter developed the idea for a studio after seeing her GIHS Art Club students work on a Halloween event for children. The students designed and constructed a haunted house in the Nike Base community building.

"I think he was impressed with how hard the art kids worked, and thought that there was that kind of missing element to recreation on Grand Island that he wanted.

"He asked me if there was an interest. I asked the Art Club kids. They came here and looked at it, and we've been kind of thinking of ways that we can use it for workshops, for open art studio, instruction if we want to do that," Wynne said.

She said the studio will open on Friday nights and Saturday afternoons, as well as some random weekdays. Any Grand Island resident student in grades 9-12 is welcome.

The studio is located in the Nike Base activity center that once housed Reality Café, which opened as a coffeehouse for high-schoolers in the 1990s and regressed into a middle-school hangout before closing in February of 2014.

The studio is run by town staff, similar to the summer sports camps the town holds. The Grand Island Town Board at its meeting Monday approved the hiring of Wynne and Julie Klein as part-time recreation attendants effective April 4, "subject to completion of pre-employment paperwork."

Klein "was hired specifically for the art studio, and in the summer she'll be doing art programs with kids," said Wynne, the studio adviser.

"I think as different kids come to it, it's going to evolve, but it's also going to be under guidance, so they can't come and just goof around with their friends. They have to come and be art-productive, creatively productive," Wynne said.

Saturday, Alexa Mallare finished a painting as a gift for a family member, Julia Koprevich worked on her Advanced Placement portfolio, and Klein made a card.

Wynne said the collaboration between the town and school has benefitted from donations by benefactors. The town provides the space, Wynne donated her own supplies, Klein donated a couch, and the school provided some surplus furniture.

One plus to the studio is the opportunity to explore a theme or project in greater depth than the time schedule in high school would allow. For instance, Wynne said students at GIHS completed a difficult project where they sculpted a human bust.

"We're still sort of developing it," Wynne said of the studio, but the possibilities are endless. Wynne said students could do theatrical readings while being sketched, host a poetry night, or conduct art workshops. In short, anything within the realm of art.

"It might be fun to ask some of the art teachers that aren't teaching at the high school, 'Would you want to come back and do a little workshop in something you specialize in with the kids you haven't seen since kindergarten or first grade,'" Wynne said.

"Who knows what else we're going to come up with. The kids want to do a Harry Potter night, where we find recipes that match what they're eating in the movie," Wynne said. "We could whittle wands, we could maybe do portrait drawings of the different characters. Wouldn't that be fun?"

Fundraisers would draw members of the general public not in grades 9-12 to the studio.

"One of the things we were thinking about is trying to do a fundraiser to replace the flooring," Wynne said, thinking of a paint night or seminar for parents or community members.

"When the kids are here just doing art, it's free for them, but if we do a fundraiser ... we actually think people might come in and do it," Wynne said.

The studio illustrates Menter's expansion of recreation offerings for youth beyond athletics.

"I think that's really cool that Joe's doing that," Wynne said. "Recreation is more than just sports. It's the arts also."