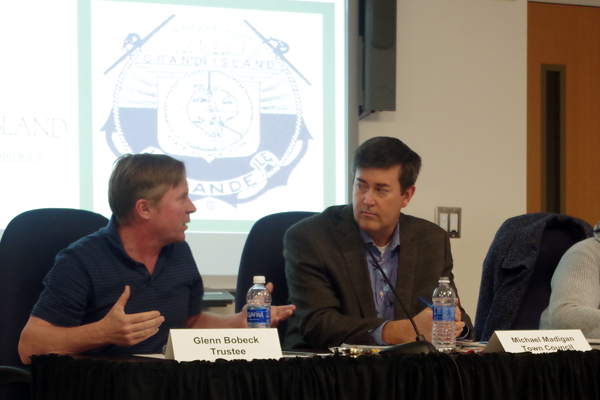 Grand Island Board of Education Trustee Glenn Bobeck, left, and Town Councilman Mike Madigan talk during a joint meeting, held March 2. The two boards discussed the 485b program at the joint meeting, which was approved by the BOE at its March 27 meeting. (Photo by Larry Austin)

The Grand Island Board of Education voted Monday in favor of two economic initiatives supported by the town government.

The BOE voted 7-0 in favor of spending $2,500, splitting the cost with the Grand Island Town Board, for a feasibility study of establishing an Island broadband system that would compete with Time Warner Cable, now called Spectrum.

The board voted 6-1, with Trustee Glenn Bobeck voting no, to approve the 485-b tax exemption, giving a three-year tax break to some commercial properties that expand. The motion said Section 485-b of "the Real Property Tax Law authorizes a partial exemption from real property taxation for commercial, business or industrial property constructed, altered, installed or improved."

The BoE authorization for exemption in 485-b program covers a three-year period for commercial business, from 2017 to 2020.

Other trustees pushed ahead with the vote, with Board Vice President Donna Tomkins saying, "We keep procrastinating."

Bobeck has voted against the exemption every time the option has been presented to the school board in years past. He said granting businesses that expand a tax exemption "will allow any commercial development on the Island for the next three years to get a tax break." He added the last time the board approved the exemption, there were two businesses that took advantage of the exemption even though they would have gone forward with expansion plans anyway, a fact that Deputy Town Supervisor Jim Sharpe acknowledged during the most recent joint Town Board/School Board meeting.

Bobeck said the exemption "puts existing businesses on the Island to a disadvantage" with neighboring competitors who have the exemption. He noted no other school district grants the exemption.

Buckingham called the Viking Olympics "one of the biggest events of the whole school year and almost everyone from the school comes."

The event will take place from 5 to 9 p.m. and will include 10 food trucks.

High school ambassador Adam Frosolone said Monday began the annual Clash Week, a spring spirit week that culminates on Friday with a pep rally and a dance. He also said tomatoes and kale are growing in the school's new greenhouse, and the GIHS Art Club just recently helped the town open an art space in the Nike Base, with hours of operation Saturday's from noon to 5 p.m.