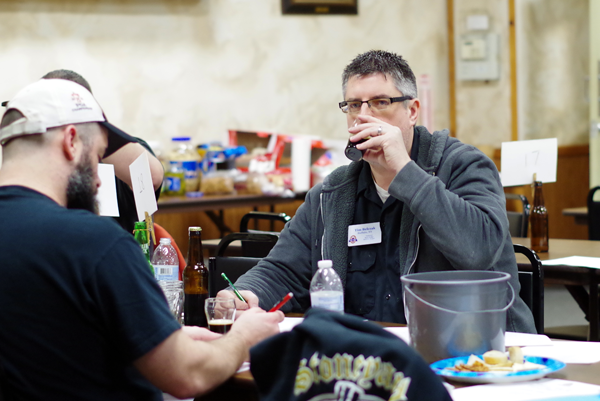 Grand Island native Tim Belczak samples an entry in the Amber Wavers of Grain competition held Friday and Saturday at the Knights of Columbus Mary Star of the Sea Council hall on Whitehaven Road. (Photo by Larry Austin)

Grand Island was the epicenter of the area's homebrewing hobby Friday and Saturday as Amber Waves of Grain, the Western New York Homebrew Competition held by the Niagara Association of Homebrewers, took place at the Knights of Columbus hall.

Alex Placito of AWOG said there were 530 entries in the 21st annual event, which for many years has been based at the K of C Mary Star of the Sea hall. Fifty-three judges graded home brews (beer, cider and mead) based on Beer Judge Certification Program standards.

A few members of the Niagara Association of Homebrewers live on the Island, and one Tim Collins, is a member of the K of C, where the event is hosted.

All the 530 entries were sorted by style category. AWOG collapsed 60-80 categories into 35.

"So within each of those 35 groups, all the beers are judged and we come up with a first, second and third place, and occasionally there's an honorable mention," Placito said. After judging, a banquet and award ceremony was held at the University at Buffalo.

The qualities of a winning beer varies based on style, but all the elements must be present and based the earmarks what the style is supposed to be, Placito said.

"It should be balanced, it should be drinkable, also there should be no flaws. These judges are trained to detect any process flaws, anything like fermentation problems, oxidation due to excessive aging or excessive exposure to oxygen," Placito said.

"So as long as a beer is good, doesn't have any flaws, tastes great, smells great, has good balance, has all the earmarks for the style, the judges will give it a high mark," Placito said.

The association draws 20 to 30 people to the average monthly meeting, with the club close to 100 active members.

While drinking beer is as simple as making a trip to a store or stopping at a tavern, the art of beer brewing is a social endeavor.

"The collaboration is pretty fun. It's like why cook your own food, you know? It's exciting. It tastes better when it's yours," Placito said.

Homebrewing is a rare hobby that one can share with others, he added. "Something where you can enjoy the fruits of your labor relatively quickly after you've made it. ... A club like this and a competition like this brings people together in a way that I've never seen elsewhere," Placito said.

What is it about beer?

"I think I know what it is about beer. Obviously it's partially the alcohol. But then why not wine, right? Why not spirits? The answer is that the alcohol's low enough that you can spend hours drinking beers as long as you're safe and still be coherent and still enjoy yourself."

"It's the most social beverage that we have. That's why I think it's so powerful," Placito said.