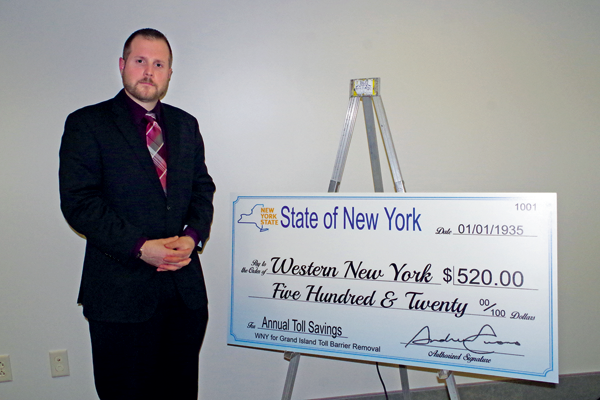 Grand Island toll opponent Brian Michel is pictured next to a check that illustrates the amount of money he says the area pays the state in tolls. (Photo by Larry Austin)

The drumbeat for removal of tolls at Grand Island bridges continued last week at a forum held in Niagara Falls.

March 22 at the offices of the Niagara Global Tourism Institute on Old Falls Street at Third Street, leaders of a group called WNY for Grand Island Toll Barrier Removal hosted a public forum attended by about three dozen members of the public, many from Grand Island.

Brian Michel, leader of the citizen group formed in October, said he began his endeavor "as a curiosity," but added support for a petition drive to remove the tolls "has been booming since we opened it up. Today we have over 3,100 supporters on it and our voice has never been louder."

Phase I of the petition drive garnered more than 1,000 signatures.

"That mind you is without one copy of the paper itself being handed out. That's all online there," Michel said.

He called the movement is about time and money: getting people home on time from their daily commute, and saving the average family hundreds of dollars a year.

"Every year we are paying $520 to use the bridges," Michel said.

Though he wants the tolls gone, he said cashless tolling as exists in other areas downstate is the next best option.

"I see no reason why Western New York could not be next," he said. "I just think anything is better than the status quo as we know it today."

"In the process, there were more expenditures than that that people may not know, and that is that Grand Island forfeited nearly 15 percent of its property to have the bridges," Sharpe said. 09:09

"So Buckhorn Park, Beaver Island Park, the West River Parkway were all a contribution by the town leaders at that time to get a bridge for it," Sharpe said.