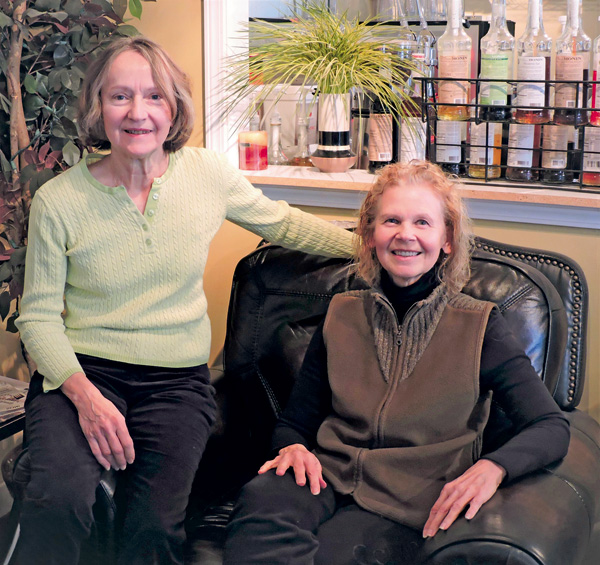 Claudia Marasco and Arlene Sliz were chosen by Village of Lewiston Mayor Terry Collesano and the Board of Trustees as the 2017 Village of Lewiston Citizens of the Year. Together, their volunteer work for the "Invest in a Vest" program has ensured extra protection for our local police force.

Claudia and Arlene are both longtime residents of the Village of Lewiston. Claudia has lived in the village since 1982, and Arlene for the past 45 years.

Daily walks around the village are common for both, and it was on one of those morning walks that Arlene ran into Claudia. A series of unfortunate events had just happened nationally and also in our community regarding safety, and this struck a chord with Arlene. She asked Claudia if she happened to know if our local police force was prepared to handle active shooter situations.

This question spurred other questions, incorporating Lewiston Police Chief Frank Previte and the Village of Lewiston to take a look at how our police force was protected. It was at a Village Board meeting where Claudia asked if all of the police staff had the type of vests that could sustain bullets. The answer was that not all of them had them, and it was shortly after that meeting that the program "Invest in a Vest" started to take shape.

At first, the two thought having a chicken barbecue event or basket auction would be a good start to raise funds. They were under the impression to start small, but quickly learned this grassroots process would take on a life of its own - and an entire community would get involved.

Claudia and Arlene met with a local bank to start the process of creating an account, but had some bumps along the way in getting one opened. They also met with Village of Lewiston Clerk/Treasurer Amy Salada, Deputy Treasurer Ed Walker and Deputy Clerk Stephanie Meyers. It was realized that the funds could come through the village, with a stipulation that they only be used for the "Invest in a Vest" program.

Arlene quickly made posters and brochures, printed from her home computer, that were distributed to local businesses and residents. The first week the volunteers started, they collected $3,000. Word of mouth spread from there.

Shortly after the program started in July, Claudia and Arlene gained the interest of the local media. The Lewiston-Porter Sentinel had a cover feature. The Niagara Gazette and then local TV news stations followed.

Word quickly grew, and the community soon embraced the campaign. Businesses began to donate and get involved. An anonymous donor provided funds for Stuart Sports to produce T-shirts, which were given to donors at the $100 or more level. More than 65 T-shirts were given out. Donations were made in amounts from $5 up to $2,000. The goal was $20,000 to cover 20 full- and part-time Lewiston officers with quality-grade vests that would offer the best protection.

Claudia and Arlene are now just $250 away from raising $26,000. They raised enough to purchase custom-fitted vests for 20 officers, as well as LPD K-9 Taser. As people were donating, they asked if Taser was equipped with a vest. Taser's veterinarian also put the word out of the program, and funds came in to cover the dog's equipment.

Claudia and Arlene worked with Chief Previte to make sure the "Invest in a Vest" program would continue to cover the needs of the department. As new officers are hired, new custom-fitted vests will be ordered. Donations will continue to be accepted. Donate in person at the Village of Lewiston clerk's office (145 N. Fourth St.), with cash or a check made out to the Village of Lewiston (memo line: Invest in a Vest).

The company that supplies the vests was so impressed with the work Claudia and Arlene did, that representatives remarked it was the first time there was an entire community that came together to pay for vests.

These two dynamic women created the blueprint for other communities to follow to protect their local police force.

The entire community is fortunate to have volunteers Claudia and Arlene. Their grassroots way of fundraising - no technology or purchasing ads, just word of mouth marketing - was successful. They saw a need that would result in the entire community participating, and the place we love to live, work and play in - and the officers who dedicate their lives to protecting us - made a little safer.

The Lewiston community is grateful to have such a wonderful police force and committed residents such as Claudia and Arlene. The Lewiston Police Department staff and families are especially grateful.

"They bring out the best in all of us, and have affirmed to the men and women of this department that those we protect are also concerned with protecting us. It again demonstrates how special our community is, and why we all love Lewiston," Previte said.