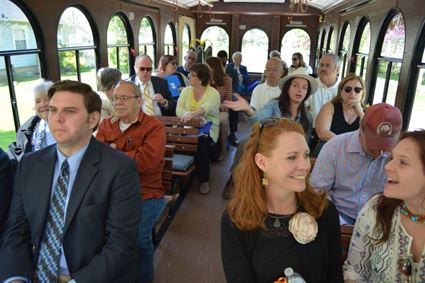 Spring has sprung and the Discover Niagara Shuttle is readying for the 2017 tourist season.

Also, new this year is an expanded operating schedule - 9 a.m. to midnight on Fridays and Saturdays, with Monday to Thursday hours running from 9 a.m. to 7 p.m.

"We are extending the hours, on Friday and Saturday nights to midnight. That's to service our local restaurants, and also our events and festivals," said Capen. "Whether it's Artpark or our restaurants, we are encouraging this."

She said more parking areas would be incorporated throughout the Heritage Area, to provide greater convenience for riders and also alleviate congestion issues in downtown Niagara Falls.

The shuttle will also offer new stops along the Niagara Falls to Lewiston to Youngstown river route. These include the recently opened Niagara Falls Amtrak train station on Whirlpool Street, the historic Oakwood Cemetery and the Third Street restaurant district in Niagara Falls with links to nearby Pine Avenue.

"We're having a couple of (new) stops in Niagara Falls, and we want to be able to have people come to places" along the lower river region, commented Aaron Dey, who serves as operations manager for the shuttle.

These will complement what is already an attractive list of shuttle destinations throughout the River Region. In 2016, the shuttle stopped off at Old Main Street; the Niagara USA Official Visitors Center; Third and Old Falls streets; the Aquarium of Niagara; the Niagara Arts and Cultural Center; Whirlpool State Park; the Castellani Art Museum at Niagara University; the New York Power Authority's Niagara Power Project Power Vista; the Lewiston business district on Center Street, and Lewiston waterfront; the Youngstown business district on Main Street; the village's waterfront area, and Old Fort Niagara.

Capen said 33,530 riders utilized the shuttle during its 2016 May to October run. And the service was very well received by visitors, as well as residents.

"Most of them were visitors to the area. But there were also residents ... people reconnecting," she said. "There are a myriad of ways that people are using it. We had young people that didn't have cars, going to their summer jobs."

"What it did is it really generated economic impact," Capen continued.

She said on the shuttle's last day in 2016, "a half-dozen Lewiston businesses came out and thanked us profusely, and asked us if could extend it to Christmas."

"We had so much support from the businesses (in the lower River Region)," Capen said. "We know that it is extending the stay for visitors."

But operating a successful shuttle also takes a considerable amount of funding.

"Funding for year two operations (is expected) to be leveraged between local, state and federal stakeholders, with $100,000 contributed by the National Heritage Area," Capen said. "The match to that was almost $1.5 million (by the other stakeholders). ... From a perspective of funding, you want all those matches; that's what makes it really viable."

She said shuttle service in year two would again be cost-free for riders.

In her recent remarks to Town of Lewiston officials, Capen said providing a service such as the shuttle is key to maintaining a successful Niagara Falls tourism economy.

"For decades and decades, people have been trying to figure out a way to tackle the transportation challenge that our region faces," she said. "We know that as far as the economy goes, that tourism is playing a greater role in our local, regional economy. And one of the key ingredients is transportation.

"Approximately 6 to 8 million people come to Niagara Falls. The idea behind transportation is that we want to share with them that tremendous cultural, natural and historic resources that are all along the Niagara River corridor. That includes Lewiston and Youngstown."

"We know that we have these treasures," Capen said. "That's why we were founded as a heritage area, authorized by Congress in 2006, to make sure we preserve, protect and promote these cultural resources.

"But the whole idea is when you get people to come to these resources, they stay longer ... they spend more money. And that goes right back into our businesses ... our communities. It revitalizes our cultural attractions, and it also builds pride, in a sense of who we are, and the heritage that we have."

Capen said reactions from riders - visitors and residents alike - has been nothing but positive. Some comments included:

"Hands down, this was the best mini vacation ever," Youngstown resident Gary Beatty said. "The shuttle's were clean, on-time, and the drivers were friendly, knowledgeable of the area, and personable. All told, our vacation lasted about six hours, including a stop for a late lunch in Lewiston. These shuttles are exactly what the area needs for tourists, locals and everyone in between."

First-time visitors to Niagara Falls, Barbara and Rafael Vazquez were even more telling.

"I have been giving feedback on our first visit to Niagara Falls. ... Unfortunately this has been the only compliment I have been able to share. We have encountered many negative experiences ... but thankfully your company gave us a positive experience. We wanted to commend one of your shuttle drivers, by the name of Otis. He was such a pleasure to be with during our stops throughout the area. He was very informative and encouraging with our children, making them feel special along the trip," they shared.

"I must say I wish we had encountered this quality of service in other areas of our visit," the women commented.

For 2017, Capen said, "We are entering into our second year, with the understanding that everyone will be stakeholders involved in it."

She said the City of Niagara Falls recently stepped forward with $100,000 in funding, and her group continues to pursue assistance from both governmental and private entities. At this point, she said the shuttle remains about $60,000 shy of its funding total for 2017.

Noting the many positive reactions, Capen pointed to State Parks personnel in the Youngstown area who encouraged outside visitors to utilize the service.

"Throughout the season ... we witnessed a steady increase in Canadian boaters, docking in Youngstown and utilizing the shuttle serve to explore the Niagara Falls and Niagara River corridor," Capen said.

She added, "It created almost 20 jobs (with the shuttle). One of our highest needs is for licensed CDL drivers. ... We're looking for them now" for 2017.

She closed by saying the shuttle's model remains one of providing clean, efficient and practical service for its riders - at a reasonable price.

And "a sustainability formula to fund this after 2017" is key.

"If we were to privatize it today, it would cost approximately between $17 to $25 per user, to ride the shuttle," Capen said. "We don't want that high (of a) number. We don't want people to decide whether they're going to enjoy a dinner in Lewiston or ride the shuttle. We want to push that economic impact into our communities, into our local businesses, into our local economy. That's why a public/private partnership is really the best formula.

"We're planning to incorporate a fare for 2018; we're looking at somewhere around $5. That's because we don't want people to choose between going to a restaurant (or visiting area attractions). We want (both). ... We don't want (them) to decide between one or the other.

"Look, we have a whole lot of people who have contributed to the project. I'm trying to create a stronger economy for all of us, and better our community."

For more on the Discover Niagara Shuttle, and its plans for 2017 and beyond, visit www.discoverniagara.org/shuttle.