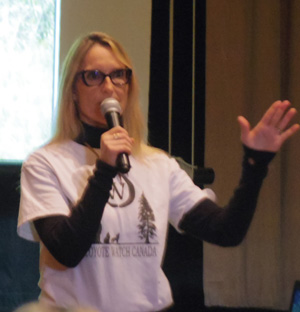 Coexisting with coyotes discussed at forum

Humans and coyotes can coexist successfully, said Lesley Sampson of Coyote Watch Canada, who spoke Wednesday at Huth Road Elementary School at a program co-sponsored by Citizens Coalition for Wildlife and Environment and Animal Advocates of Western New York.

Coyotes are "resilient, curious and creative hunters and foragers. They are opportunistic omnivores. They are adaptable, intelligent and resourceful. They have a diverse diet and an excellent sense of smell." The diet of coyotes is mostly rodents, fruit, insects, and carrion. "They are mother nature's cleanup crew," she said.

The first reaction that people have to seeing coyotes near their homes is "fearful and lethal," Sampson said. She explained that killing coyotes is an ineffective method of population control. Instead, a stable coyote family is the best method for population control, she explained. Coyotes are social animals and living in groups, called packs. The dominant pair (the alpha male and alpha female) mate for life. Only the alpha pair breed and they produce small litters. "The alpha (coyotes) maintain their territory and they protect it from other coyotes." Both parents participate in raising pups. The female feeds her offspring and the male hunts for food. If the alpha pair is killed, new coyotes, who had previously been excluded by the dominant pair from the territory, will appear.

There are effective and nonlethal methods of preventing coyote conflicts with humans and with dogs, Sampson said. She suggests to people who want to keep coyotes out of their yards that they "look at their own spaces." She said not to feed coyotes. There are plenty of mice and other rodents for them to eat. "They don't need our handouts," she said. Make sure to secure garbage and to make sure that the compost bin is closed. People who feed outdoor animals, such as feral cats and dogs, should feed the animals once a day and should remove the leftovers as soon as the animals have finished eating, Sampson explained. People should make sure to walk their dogs on leashes. "Coyotes do not eat dogs, but they see dogs as competition for food and as a danger to their pups," Sampson explained. "Coyotes are interested in dogs but not in humans, and the leash attaches the dog to the human."

Coyotes on people's property can be discouraged from staying there with a technique called "coyote hazing." This is a form of "aversion conditioning," Sampson said. "I have been chasing coyotes for two decades. This is not a new technique. It has been done with tigers and bears." Hazing a coyote involves making noise. Voices, she said, should be loud and assertive. Projectiles that are found in nature can be thrown to startle a coyote. "Never throw anything at an animal," Sampson said. Other noisy objects that would annoy a coyote and make it run off would include snapping garbage bags, popping open umbrellas, punching balloons, and shaking cans filled with coins.

In the right environment, coyotes are helpful. "Coyotes help farmers," Sampson said. "They keep out other coyotes and they eat rodents."