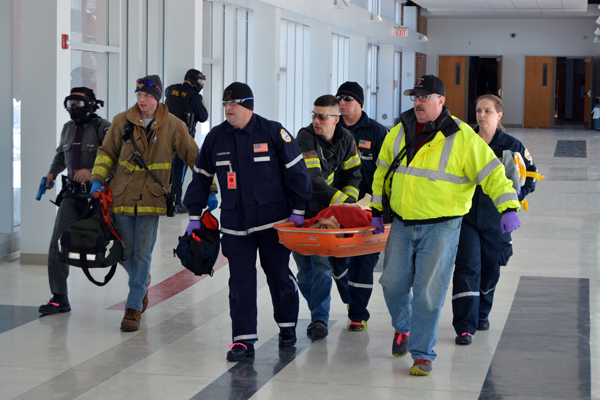 First responders staged a simulated crisis situation and worked on response efforts on Friday at the Niagara-Wheatfield Central School District.

The exercise at the high school included an active shooter drill "to simulate that type of thing as realistic as we can," Lewiston Police Department Chief Frank Previte said. "We do have victims involved, and it's going to be a full-force-type scenario."

He added, "It's something we've been planning on doing for quite a while. The school was interested in doing this and we were happy to accommodate."

New York State Trooper Capt. Eric Laughton said, "Today we have the opportunity to collaborate because, if this happens, there won't be one uniform responding. ... So this allows us to make sure we can work together in Niagara County."

During the exercise, responders were released sporadically into the building. Initial teams focused on finding and isolating the threat. Additional teams would come in to provide first aid to victims, said Steven C. Preisch, chief deputy of the Niagara County Sheriff's Office.

"That would be more of a realistic response, because you wouldn't have a S.W.A.T. team right away. A S.W.A.T. team would take hours to put together," Preisch said. You would have all different departments responding from different agencies at different times. They would be wanting to do everything. So this is what we're practicing.

"I see a lot of schools practicing and they use S.W.A.T. teams and things like that and that's not as realistic as a true (experience) as you saw at Sandy Hook or going back to Columbine. So, again, this is a nice opportunity.

"Really, we owe it to Niagara-Wheatfield, because to make the school available to us, especially with staff in it, is a very rare opportunity that we had to take advantage of."

"This is a great training not only for law enforcing, EMS and fire, but also we're using school staff as victims, and this could be very real, because this is the world we live in," said James O'Callaghan, New York State Trooper public information officer. "So, not only do we get the training, and EMS and fire get the training of a drill like this or an event like this, the staff will recognize and maybe pick things up that maybe they just would have never thought about in a drill like this."

Niagara-Wheatfield Central School Superintendent Daniel G. Ljiljanich said the overall exercise was "an awesome collaboration. We had all these agencies; when we talked about doing this exercise, just jump in. We probably met eight to 10 times. They gave up countless hours making this happen, and the other thing it's really done is it's opened up lines of communication between the school, the fire, ambulance and law enforcement that maybe didn't exist before."

After the drill, officials were set to review how it went and what can be worked on. The results will also be shared with school officials.

"We're going to gather all our feedback after," Ljiljanich said. "That's why we did it - to learn from this." 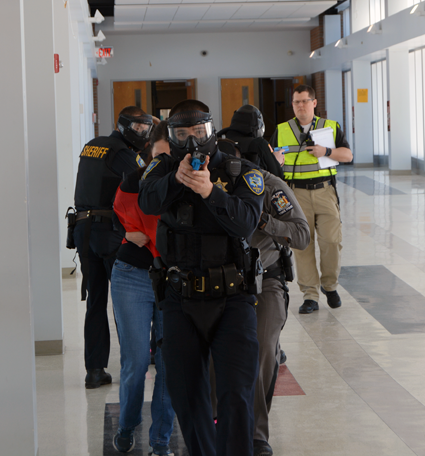 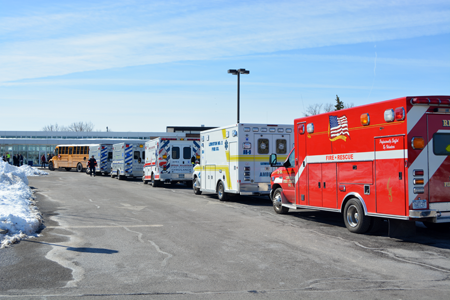