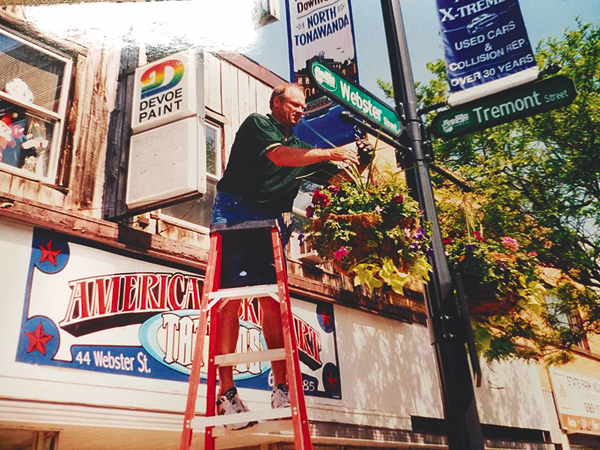 North Tonawanda's Project Pride, a volunteer community organization that promotes local beautification efforts, is making a comeback after more than a decade.

According to the group's recent press release, Project Pride is "a grassroots, volunteer-driven organization, which strives to promote a sense of identity and pride among the residents and business people in North Tonawanda."

The project will focus on cleaning-up and beautifying North Tonawanda's downtown area, including Webster Street.

"I always heard about Project Pride in the past and all the great things that they did back in the late '90s, early 2000s," said Laura Bernsohn, Project Pride's secretary and planning and development specialist at Lumber City Development Corp. "And I think that relaunching this is a good way to get new volunteers involved in the city and just keep the momentum going that was built before."

One of Project Pride's original members, Donna Burgio, said both Webster Street and the Gateway Harbor area looked "very barren" before the original group's work. Project Pride was founded by her husband, former City of North Tonawanda Mayor David Burgio, and began its beautification projects in the late '90s.

"Just looking at old pictures, there (was) a lack of beautification," Bernsohn said. "There weren't many flowers."

Due to its bleak appearance, Burgio said, "My husband decided that he wanted to do something. He approached the Common Council and our mission statement was 'for a better North Tonawanda.' "

Project Pride partnered with the city, the Downtown Merchants Association and local residents to run various cleanup efforts throughout the city, including making flower baskets and planters for Webster Street and Gateway Harbor, and tidying and planting foliage on Manhattan Street.

Group members volunteered to do everything from growing the flowers (inside green houses at the North Tonawanda Botanical Gardens) to building planters and planting flowers.

The group even had a pathway named after it.

"It's the walkway that goes from Manhattan Street to Webster Street. ... You can park in Manhattan Street parking lot and walk through to go to the Riviera or anything downtown. And the city, at the time, was very appreciative of all the work that Project Pride did. And they did that as a tribute to us - they named the walk 'Project Pride Way.' "

Now, after Project Pride has been inactive for years, Donna Burgio said, "We need some more beautification happening again. And we still have some funds left and here we have a 501(c)(3) sitting with nothing to do. So we decided to revitalize it."

Donna Burgio helped bring the group back to life, and established a new board of directors.

The new group, under the leadership of new Project Pride President Barbara Hughes, owner of Webster's Bistro, started meeting last fall. This spring, the group plans to start off with adding more flowers on Webster Street. She said sponsorships for boxes would be available so businesses can fund some of the additional expenses that go toward creating the arrangements.

She also said there may be some opportunity to increase greenspace in the downtown area, "But those are more long-term projects."

Hughes added, "We're part of the Niagara Region." In North Tonawanda, "We draw locals to our restaurants, our theater, our retail, but we're also drawing from outside of the region - visitors that we have coming from Niagara Falls, maybe visitors that are in Buffalo and are coming up to North Tonawanda because of our location on the Niagara River," she said. "So all of these programs of beautification also create an environment for visitors to come here as a destination. And, of course, the idea is such that they spend the day with us and maybe they start taking advantage of all the wonderful things that we have in our community."

In a press release, Hughes said, "We are eager to get started on projects, but without the help of others we will not be able to make an impact."

Anyone is welcome to volunteer with the group. To help spread the word, a Project Pride open house and fundraising event will be held at 6:30 p.m. Monday, April 3, at the Riviera Theatre, 67 Webster St.

During the public event, Project Pride members will present the history of the group, what it was able to accomplish in the past, and what the new group's members hope to achieve.

Hughes said the event will serve as a fundraiser for the group (as a basket raffle will be featured), a call for volunteers and an opportunity for the group to educate the community on its goals.

Overall, Burgio said, "We have to see where (Project Pride) will take us, but at least it's a start again."

Those who are unable to attend the open house and fundraiser, but are interested in volunteering, can contact Hughes at [email protected]. 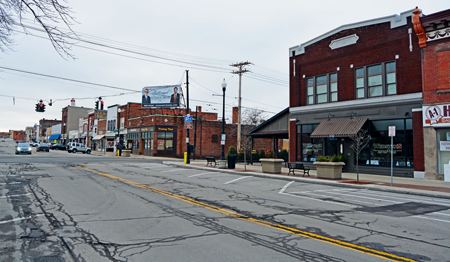 Shown is a recent photo of Webster Street. (Photo by Lauren Zaepfel)