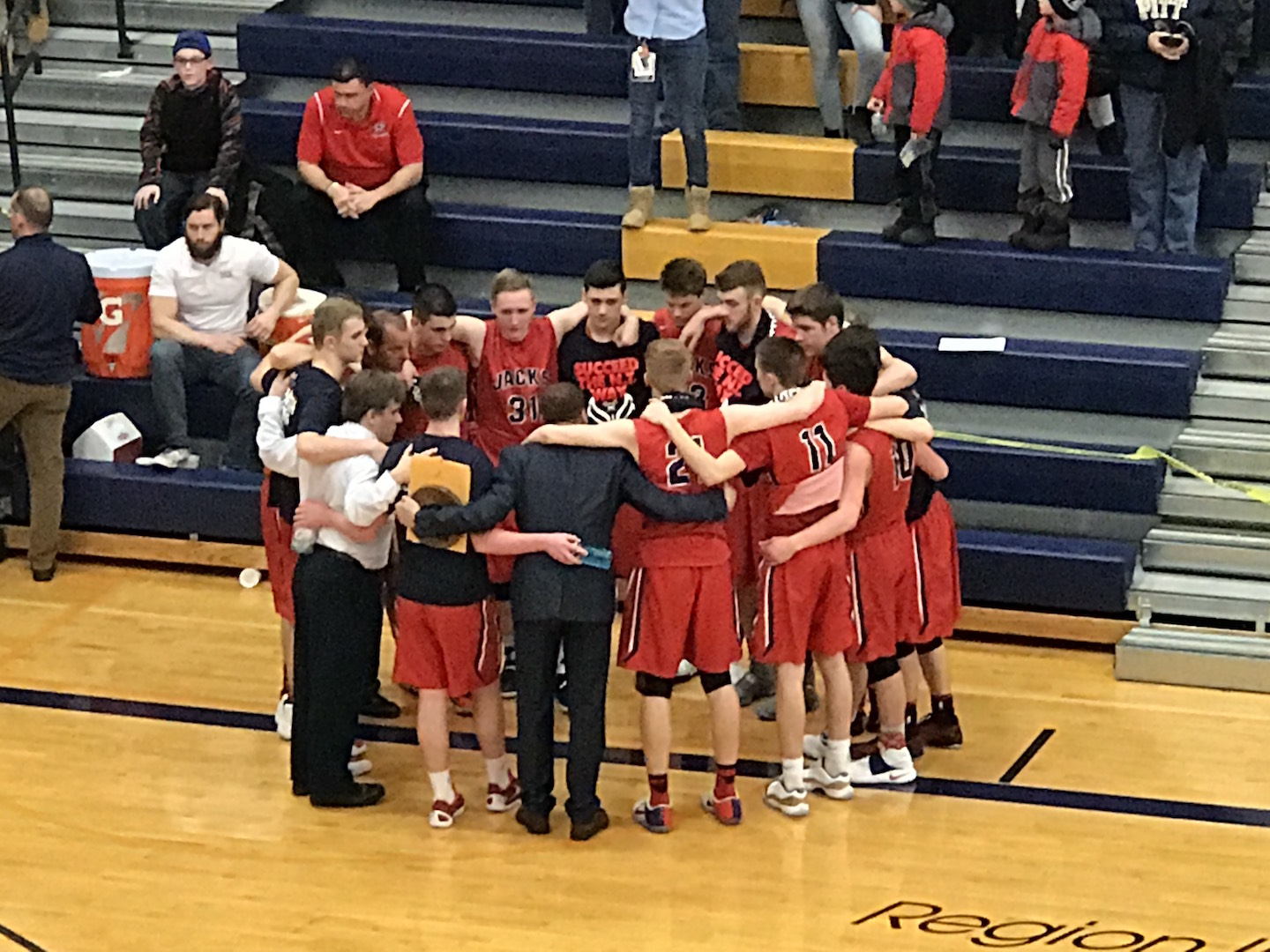 The North Tonawanda Jumberjacks came up short vs. Irondequoit.

In front of a loud crowd at Genesee Community College on Saturday, the North Tonawanda Lumberjacks record-breaking season came to a close. The Irondequoit Eagles defeated the Jacks 65-41 in the Class A Far West Regional.

It wasn't NT's best night offensively, at the team shot only 31.1 percent for the game.

Irondequoit didn't shoot much better, at 34.4 percent, but 31 points off of turnovers aided the team in its victory.

"When you're playing the No. 1 team in New York state, and they play their A-game, it's gonna be tough to beat them," NT coach Ryan Mountain said.

The Eagles got off to a fast start, grabbing a 15-4 lead. Patrick Milbrand had 3 points to end the quarter, but NT trailed 15-7 after one quarter.

Irondequoit opened the second quarter with a 17-2 run, led by Gerald Drumgoole, who had 9 of those 17 points. Drumgoole finished with a game-high 21 points.

Trevor Book propelled the Jacks' 7-0 run to finish the half, and shorten the Eagles' lead to 32-16.

North Tonawanda had made ferocious comebacks before. In a regular season game vs. Niagara Falls, early in the third quarter, the Jacks faced an 18-point deficit. That comeback came up short, but, the Jacks only lost 52-50.

The team was hoping for the same type of comeback effort on Saturday. It didn't happen, as Irondequoit won the third quarter, 20-9, and headed into the fourth quarter up 52-25.

Coach Mountain gave credit to the Eagles, saying they were a tough group.

"They were very physical inside," Mountain said. "They were playing one in behind, and we just didn't get the ball rotated quick enough. When we did, they were excellent in closing out. They played tremendous defense and, quite honestly, that's probably the best basketball team we've played in two years."

Book led the Jacks in points with 11, while Alex Quinn added 9.

NT finished the year 20-5, with a share of the Niagara Frontier League title and also the school's first sectional title since 1961.

Mountain said he was pleased with the season his team had.

"It's been an incredible journey for two years," he said. "One that no one will be able to take away from this team. Obviously, 20 wins - most in NT history; highest-scoring team in NT history; and made it the furthest in a sectional run in NT history. All things that they've earned the right to walk tall with pride and confidence. When I say 'earned,' they earned it."

Mountain noted the memories he made with his seniors and said, "It's a comma, not a period, and we're gonna be a team for eternity."