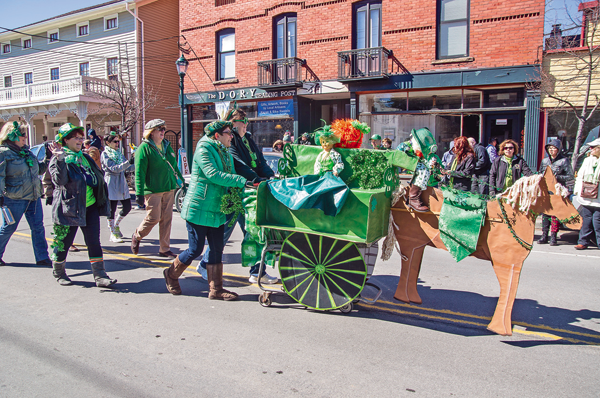 Pictured is a past St. Patrick's Day in Youngstown. (File photo by Wayne Peters)

A 'rite of spring' returns to Buffalo-Niagara

Did you know that Buffalo is recognized as the No. 1 U.S. city when it comes to "Best Cities for St. Patrick's Day Celebrations"?

That's according to the online survey evaluator wallethub.com, which grades cities large and small on a whole assortment of topics.

When it comes St. Patrick's Day, apparently Buffalo takes the top - over other such predominately Irish cities as Boston, Pittsburgh, Rochester, Cleveland, Chicago, Cincinnati and Savannah.

But why Buffalo, you ask? It's a small city, and its population ethnicity is certainly diverse.

Well, in many respects, in Buffalo, St. Patrick's Day is not just recognized as an individual day, but as a "rite of spring" - a time of "letting loose" following those miseries of winter we've all come to appreciate in this area.

Polish Dyngus Day festivities are celebrated in much the same manner.

Maybe it's just how the Buffalo-Niagara population actually comes out and celebrates this day? This time of the year, you see it all over the area - from the Old First Ward Shamrock Run and neighborhood hooley, to those St. Pat's South Buffalo Irish Center breakfasts and civic lunches, celebratory Masses in churches throughout the area, to the seemingly endless social gatherings in clubs, bars churches and schools. 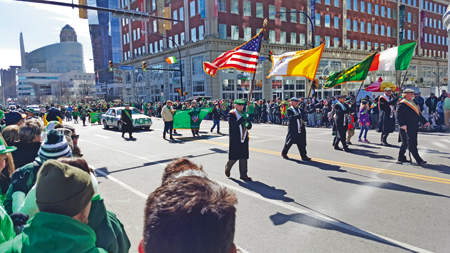 The parade in Buffalo

And, oh, yes, the parades. There's a parade in the city's Old First Ward, the "World's Shortest Parade" in Niagara Falls, a unique shopping cart parade of fine Irish greenery in Youngstown, and that grand parade down Delaware Avenue in Buffalo that draws tens of thousands.

Those of "traditional Irish stock" - Irish-Catholic diehards often called by my grandfather, Nat Duffy (now deceased) - typically refer to this time of year as "the High Holy Days."

And with good reason.

Next weekend will see a number of St. Patrick's celebrations, big and small, far and wide - and all guaranteed to be a good time in Buffalo-Niagara. Here's a sampling:

•On Friday, March 17, proprietor Pat Stack of the little bar known as Somewhere on Blairville Road in Youngstown will continue what has become a tradition in these parts - his annual St. Paddy's Day Party. Set to run from roughly 2 to 11 p.m. (give or take), look for healthy servings of Guinness, pours of fine Irish whiskeys, specialty drinks, corned beef servings, plus fine Irish music and culture galore to delight all ages.

That day, Somewhere will be partying both inside and out with massive tents (10,000 square feet in size and heated) set up outside, with festivities expected to begin "somewhere" between 3-3:30 p.m. 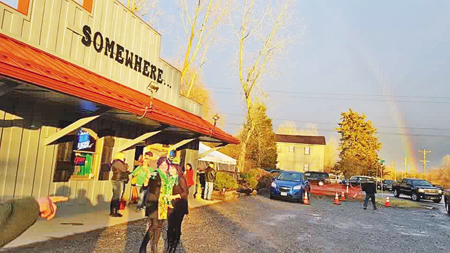 "It's a nine-piece band - includes a bag piper and a fiddler. We'll be playing from 5 to 10:30," Stack said. He welcomes families (kids included) to join in this celebration of fine Irish culture. "Look I was brought up in an Irish environment. My kids have gone to every one since they were 3 or 4. ... I want them" (all ages) to experience this.

"And myself. I am the 'master of ceremonies,' " Stack said with a grin. "That would be the best way to put it."

Stack said the program is being dedicated to "some special people that we lost." These include Pat's dad, Ben Stack - a retired Niagara Falls Police Department attorney and legendary Irish musician who passed away last year, and close friend Maureen Shannahan Devin of Ransomville.

"We're going to honor the ones that we lost this year. It should be a fine party," said Stack.

He adds that shuttle service is again being offered to those in the Lewiston, Youngstown and Porter areas - basically from below the hill and outward to the lake.

Four shuttles and one limo are being provided. Those interested are advised to visit the Somewhere page on Facebook for updated information. Stack adds that Designated Drivers of Buffalo will also be available to assist partygoers with their travel.

"We like to pick them up, bring them home," Stack said of the shuttle. "We don't encourage drinking and driving."

But he does welcome all to come out and be part of a special St. Patrick's Day celebration.

"It's going to be a gigantic party this year," he said.

Sponsored by the Youngstown Business and Professional Association, with co-sponsorship by the village and Youngstown Police, YBPA President Cheryl Butera invites the community to attend and enjoy. She forecasts it will be "the best one yet."

To be held rain, snow or shine, it's open to all who want to join in. Shopping carts are being provided by Melloni's Market Place on Lockport Street, and area residents, businesses, even visitors, are welcome to join in what Butera hopes would be parade of green.

She recalled its simple beginnings.

Presented in memory of the late Youngstown Mayor Neil C. Riordan, who passed away in 2011, the first-ever parade featured just one shopping cart decked out in green - her own, Butera said. 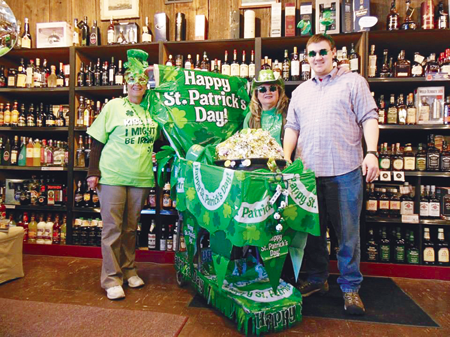 Inside Anchor Spirits in Youngstown

"It was one shopping cart; we (Butera and Diane Melloni of Melloni's Market Place) went to the sidewalk across the street," she said. "When we first thought of doing this, we thought, 'Oh, the cost.' "

But over the years, it's become a community endeavor.

"This is all volunteer; it's all for fun," she added.

This year, more than 22 participants have signed on thus far. And she welcomes more to join in.

The parade itself will get underway with participants meeting at Main and Hinman streets on the village's south end. There, a contingent from Old Fort Niagara will line up to officially open the parade.

It will then proceed north on Main to Falkner Park, do a turnaround to the Ontario House (Jug) at Main and Lockport streets where a salute to the late mayor will be given by the Highlanders, then continue a short distance south to the Mug and Musket for the judging of floats and an after party.

"We are proud to wear the waistcoats that were made specifically for us by Niagara University students in our community's St. Patrick's Day parade," said Emerson. "Some of our new musicians will also perform in public for the first time," she added.

"This is really going to be a parade," said Butera.

"There will be daylong activities - a constant flow of people all day," commented Mark Butera, YBPA secretary.

They invite all to join in for some special Patty's weekend hooley in Youngstown. For more information, visit the YBPA on Facebook or at www.youngstownnewyork.com.

Into any more St. Patrick's revelry next weekend? 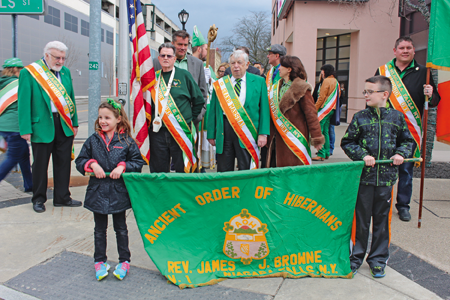 •There is more reason to celebrate on March 17, as the City of Niagara Falls joins with the Ancient Order of Hibernians to mark the city's 125th birthday as part of the annual St. Patrick's Day party. It opens with the "World's Shortest Parade" on Old Falls Street, and festivities continue from 5-11 p.m. inside The Conference & Event Center Niagara Falls, 101 Old Falls St.

"The Ancient Order of Hibernians annual St. Patrick's Day party is an institution here in the City of Niagara Falls, and one that just so happens to fall on another important day in our city's history," City of Niagara Falls Mayor Paul Dyster said. "As we prepare to mark our city's 125th year, I would encourage everyone to come out and celebrate this historic milestone. From the world's shortest parade to a birthday-themed fireworks display, it promises to be a night of family friendly fun."

AOH member event chair Mike McNerney said the AOH celebration, now in its 35th year, has become a Niagara County tradition and continues to grow. The party is held on St. Patrick's Day every year, "no matter what day it falls on," McNerney said.

He expects approximately 15,000 people to attend the family-friendly event. Look for dancers from the McCarthy School of Irish Dance, music by the Blarney Bunch, servings of corned beef and cabbage, Irish beer socializing and more.

"This is truly the largest annual party of its kind in Western New York," said Jason Murgia, general manager at The Conference & Event Center Niagara Falls. "Since this year's event is a milestone birthday for our City of Niagara Falls and it falls on a Friday evening, we are expecting larger crowds."

•Wrapping up, there is still one more not to miss - the 77th annual Buffalo St. Patrick's Day Parade, starting a 2 p.m. Sunday, March 18, on Delaware Avenue in downtown Buffalo.

Presented by the United Irish American Association, this one is a St. Patrick's celebration of Buffalo at its finest - with Irish dancers, throngs of marching bands, police, fire and elected officials, and Celtic characters galore. Crowds of upward of 100,000 Irish and Irish wannabes line Delaware Avenue in what typically becomes a sea of green extending for blocks.

For more on this one, visit the United Irish American Association website at www.buffalostpatricksdayparade.com.