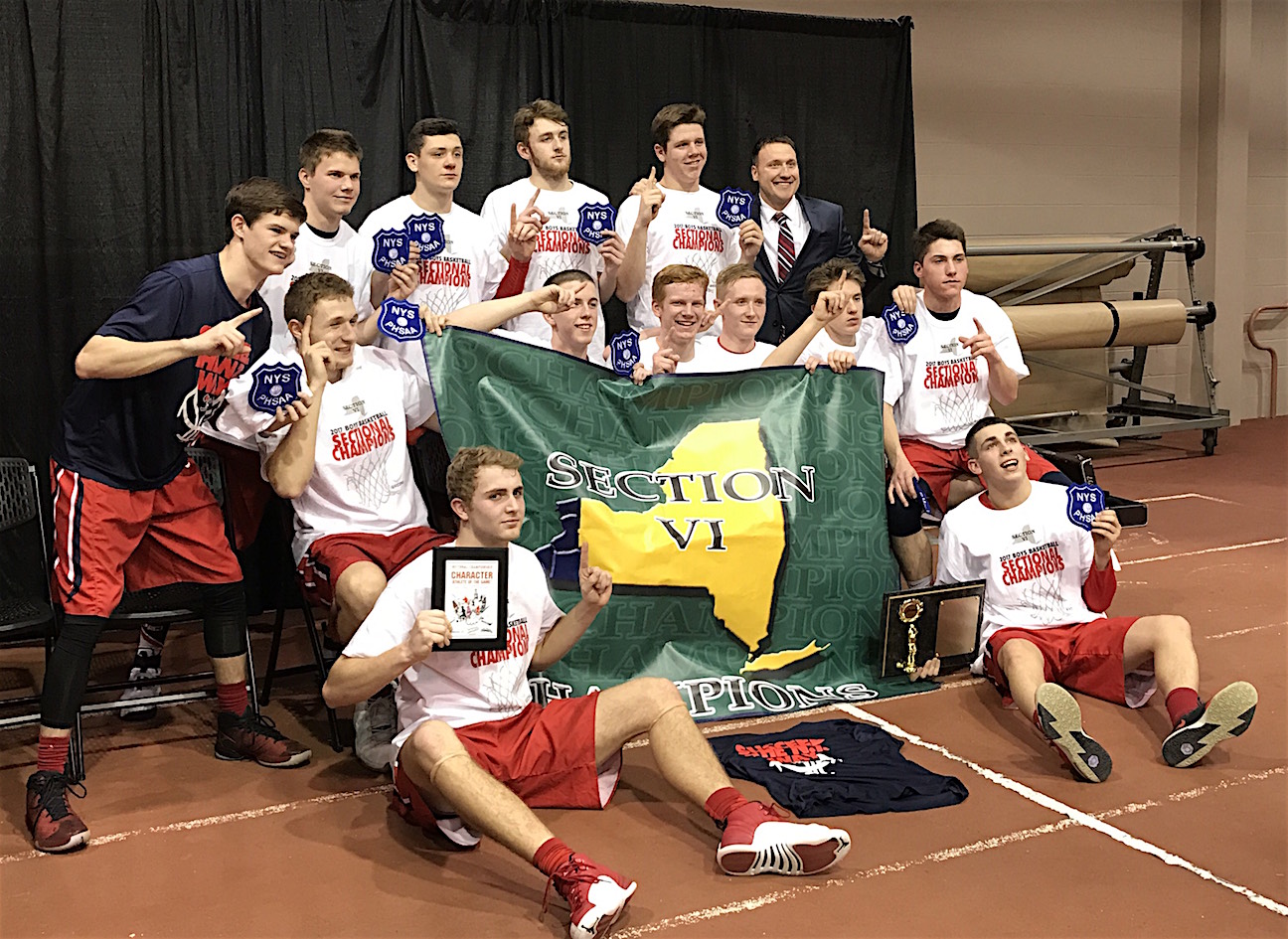 In front of a packed gym at Buffalo State College, fans got to witness history in the Section VI Class A-1 title game. The North Tonawanda Lumberjacks defeated the No. 1 seed Williamsville South Billies, 60-54, on Saturday. The win is NT's fifth title and first since 1961.

Jacks point guard Vincent Tripi called it "the best feeling I've ever had in my entire life."

Once again, the Lumberjacks lived up to their motto, "Strength in numbers," as nine different players scored.

The game was tightly contested throughout. The highest lead was 7, held by Will South.

The first quarter wasn't the Jacks' best start. They struggled offensively, but their defense kept it a manageable score after the first quarter, 12-7.

The lead remained 5 points at halftime, as both teams scored 20 points in the second quarter.

Devin Degree hit back-to-back 3s for the Billies before the half to give them a lead, but Trevor Book and Tripi kept the pressure on Will South, making shots to keep it close. At halftime, the score was 32-27 Billies.

South held the lead for most of the first three quarters, and NT seemed to have its lead down to 1 point several times. They just couldn't get that big shot to go down, to give them the lead.

In the third quarter, that all changed.

Patrick Milbrand gave the Jacks their first lead since it was 5-2, as his bucket ended the third quarter. The score was 43-42 North Tonawanda.

The defending A1 champs refused to go away, as Cody Sanford hit a 3-pointer to put the Billies back up 45-42.

Will South seemed to be putting the game away when Adam Braniecki made a layup and, on the inbounds, Dakota Wiley stole the pass and took it in for 2. The score was 54-47 at that point.

A jumper from Tripi tied it at 54. Then, after a steal by Zack Woodard, he drove to the rim and got fouled. He made the two free throws, and NT took the lead for good, 56-54.

As time ran out, players stormed the court and group hugged coach Ryan Mountain in celebration.

The win is revenge for North Tonawanda, which lost to the Billies in the same game in 2015.

Mountain said he was happy for his team.

"It feels great," Mountain said. "We really felt we were the better team, and we felt if we played our game, the NT way, we would win."

Two players from that 2015 Lumberjack team were on this year's roster: Alex Quinn and Brandon Casterline. Mountain said both led in the locker room, recalling the feeling of playing in a big-game atmosphere.

"Absolutely, both players spoke up in the locker room and said something very intelligent and stepped up as leaders," Mountain said.

The Jacks had three players in double figures. Book led the way with 14 points, while Tripi and Woodard added 12 and 11, respectively.

Mountain talked about how close his team is and the hard work they put in to get to this point.

The Jacks season will continue, as they play the champions of the A-2 bracket, the Amherst Tigers. That game will be back at Buff State at 7:30 p.m. on Tuesday, March 7.