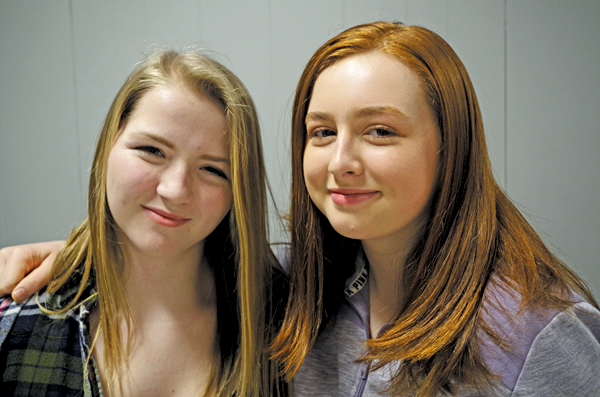 Pasta Sauce-Off 2017 promises to be biggest yet

When 14-year-old Islanders Jessica Flash and Allyson Nemeth tell people they're holding a big fundraiser, they can tell some people have their doubts.

"Skeptical," Flash said. She and Nemeth are organizing the fourth annual Pasta Sauce-Off for Carly's Club at Roswell Park Cancer Institute. "And then you come to the event and see, oh, this is like a real thing."

They raised $6,000 last year and according to Flash have raised $20,000 overall in their fundraising careers.

"It's definitely nice to see some of the faces on the first-comers," Nemeth said.

"Yeah, to see how much we've evolved and grown through this, it's definitely helped us mature," Flash added.

The evolution of fundraising started when they were 10 years old, they explained. "We had a club called Cooking for Cancer, and we would go door-to-door selling baked goods," Nemeth said. When the opportunity to take the reins of the Pasta Sauce-Off came up in 2014, they saw a way to run the event as a fundraiser for Carly's Club at Roswell Park Cancer Institute, which provides programs to children diagnosed with cancer and their families.

They didn't know going door-to-door selling their baked goods would grow into what it is today.

"Oh, my God, no," Nemeth said. "We never expected it to be this big." Flash and Nemeth are quick to point out that they didn't do it alone. They thanked their cadre of volunteers, including their mothers, Kim Nemeth and Sandy Flash; Julia Harvey, senior special events coordinator for the Roswell Park Alliance Foundation, as well as their extended group of classmates at St. Stephen School.

"They're just as much part of it as we are," Nemeth said.

Now freshmen at Cardinal O'Hara High School in Tonawanda, Flash and Nemeth have expanded their network of volunteers.

"They still help us," Flash said of the St. Stephen School friends, "and we have new people from Cardinal O'Hara who help us out now, so we have a bigger group."

More cooks will make for the best Pasta Sauce-Off ever.

"I think this is definitely going to be the biggest one yet," Nemeth said.

Fifteen sauce-makers are scheduled to compete at the Sauce-Off, with the winner crowned by the people's choice and given an engraved wooden spoon.

For the few who don't like pasta sauce, the event will include a basket raffle, a 50/50 split raffle, silent auctions, a baked sale, and the Flip a Plate game (pay $10 and players are guaranteed at least a $10 gift card, maybe more).

"That was a big hit last year when we added that," Nemeth said.

The 2016 Pasta Sauce-Off drew an estimated 200 to 250 people to the LaSalle Yacht Club, also the site of the 2017 event. Flash said the fundraiser, though held at a yacht club, is a casual affair. The event will run from 4 to 7 p.m. at the club, located at 73 S. 69th St., Niagara Falls, across the river from Grand Island and not far from the foot of the North Grand Island Bridge.

Undertaking a big fundraiser is a way to both give back to others and unite in the fight against cancer, Flash and Nemeth said.

"It's so rewarding to see how we've affected other people's lives," Flash said.

Flash and Nemeth both received scholarships to Cardinal O'Hara in part because of their commitment to volunteerism, which fits in with the school's culture, said Kim Nemeth. She said the school encourages students to explore their passion for service to others.

"I like the environment, the people. Everyone is welcoming," Flash said. "A lot of our friends are coming to the event, to either volunteer or just to come have fun."

For those who can't take part, this year, the event includes a way to contribute online. Supporters can go to www.crowdrise.com/pasta-sauce-off to make a contribution.