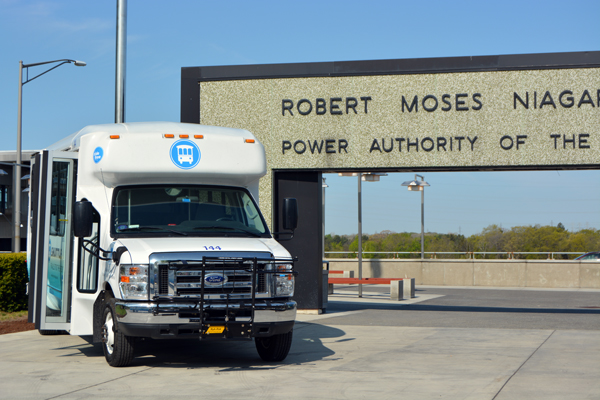 Pictured is one of the Discover Niagara Shuttle buses in action last year. (File photo by Lauren Zaepfel)

Warmer weather this week led many people to forget it's only February.

In the Village of Lewiston on Tuesday, trustees started to make plans for summer. They agreed to continue working with charitable organizations, approved a handful of longstanding outdoor events, and pledged support for a newer tourism endeavor.

The Village Board passed Guard Street resident Claudia Marasco's request to continue soliciting outside of the Artpark & Company entrances on "Tuesdays in the Park" concert nights. Starting June 6, her team of volunteers will, for the ninth straight year, collect funds and food for the needy.

"Every single cent goes directly to these missions," Marasco said. "There's no overhead fees. There's no maintenance fees. The money is given to them that night."

"Many of us are able to live well," she added. "But there are people around us that do not live well, and need help. So that's what we're doing."

"It costs us at Community Missions about a dollar per meal, so the support that you give us is really important to us," he said. "We provide about 75,000 meals each year."

Speaking on behalf of Heart, Love & Soul, which operates on Ontario Avenue in Niagara Falls, Daloia said the collection drive is an asset.

"Last year, (the late collection drive co-founder) Mamie Simonson asked me directly, 'Does what we do actually have an impact on your organization?' Unhesitantly I said 'Yes,' " Daloia said. "Last year, we served about 2,500 meals to children, and 1,500 were served just in the months of June, July and August (when concerts are held). What we do those months comes right back and directly impacts us and allows us to feed those children."

Caso, vice president of the Ransomville Road Care-n-Share, said, "We're the food pantry that serves Lewiston and Porter; and you wouldn't think that we'd need a food pantry. But on a monthly basis, in the place that's located in Ransomville ... we have an average of 340 people who come into there every month to get food. In 2016, we had over 30,000 meals that we provided."

Each speaker thanked the Village Board for granting permission for the collection efforts.

Marasco said funds would be raised for Care-n-Share during each of the 12 concert weeks (Portage Road entrance), while Community Missions and Heart, Love & Soul will alternate weeks (South Fourth and Tuscarora streets entrance).

"They all work very well together," she said. "We're very proud of what they've done."

Mayor Terry Collesano said, "Thank you all. You do admirable work for all the people. This is great. Keep up the good work."

"I think it's been a great, great success," Trustee Vic Eydt said.

Trustees approved the Niagara River Region Chamber of Commerce's request to hold the annual Lewiston Smelt Festival. The event will take place the evening of Friday, May 5, in the Water Street parking lot next to the fish-cleaning station.

Chamber President Jennifer Pauly said the new Smelt Fest site "is the best location" to accommodate growing crowds and additional food vendors. Last year, the event was held outside of 65 Center St., on property owned by Whirlpool Jet Boat Tours. In past years, it was staged on the grass in front of The Silo Restaurant.

Pauly said the Smelt Fest area would be snowfenced-in, with designations for food stands and entertainment, as well as areas for pedestrians and motorists to traverse.

She said the Moose Lodge, The Silo and Water Street Landing would be offered the first opportunity to sell food.

"Then after that, the Kiwanis Club, any of the restaurants," Pauly said. "We have to limit it, but we need to make sure there's enough food provided. In the past, after The Silo pulled out, we haven't had enough food."

The Village Board approved a request from the Kiwanis Club of Lewiston to use Academy Park from Sept. 5-12 for the annual Niagara County Peach Festival. Trustees also designated up to 35 Center Street parking spaces for handicapped patrons.

Also, the Historic Lewiston Jazz Festival board was granted permission to hold its annual event on Aug. 25-26. Trustees approved a motion that will allow the Jazz Festival organizers to close Center Street from Sixth to Fourth streets, and use the Bicentennial Peace Garden, Hennepin Park and the Red Brick Municipal Building parking lot and grass areas for VIP parking and staging.

New this year, the Jazz Festival team will look to utilize parts of the Academy Park field for parking (weather permitting).

Trustees approved nine motions related to the 22nd annual Lewiston Family Spring Fling, which is scheduled for 1-4 p.m. Sunday, April 30, at Marilyn Toohey Park (behind the Red Brick). Requests were made for various forms of family entertainment (balloon sculptor, bounce house, photo booth, games), as well as the one-mile race for children, which is set for 12:30 p.m.

Spring Fling is free for families to attend, with free food and activities, as well. Recreation Department Director Brendan McDermott said donations would be accepted in coming weeks to help offset costs.

"I wanted to give you some highlights of what's going on with the shuttle this year, and answer any questions that you may have," he said. "We've got a really exciting season coming up."

The transportation service, Dey said, alleviates some of the problems with traffic and limited parking spaces.

In 2017, "We have decided not to charge people again this year," Dey said.

When the shuttle resumes service toward the end of May, it will add Niagara Falls stops at Oakwood Cemetery and near the corner of Third Street and Ferry Avenue, and offer extended hours (until midnight) on Friday and Saturday. Additionally, flat-screen TVs will show video highlights of shuttle stops.

Village Board members have gone on record supporting the trolley, and Collesano even filmed segments for one of the videos.

"It's really been a success for our village," the mayor said. "Last summer, the number of people getting on and off the shuttle amazed me."

He added, "More importantly, I saw many, many people getting on the buses with bags of goodies that they bought around the village."

Pauly said, "Our chamber office is in full support of this. We have been since the start of it."

She noted, "Us being a welcome center, as well, every single day we keep track of that in the summer. ... We've answered questions or handed out tickets."

"It's definitely shown an increase, and our businesses absolutely love the program," Pauly said.

Dey said, "It does bring people here; it makes people stay longer in Niagara Falls - and that's the whole key to tourism."

He asked the village to contribute funding for the shuttle to help cover this summer's expenses.

Collesano said trustees are starting to look into the next fiscal year's budget.

"We will seriously look at it, and if we can scrape up a few coins here and there, we'll help you out," he said.

Collesano said he spoke last week with the New York State Department of Transportation, and the agency has agreed to lessen the amount of fluorescent crosswalk striping on Center Street. The DOT still intends to place more than four-dozen new crosswalk signs on the village's main roadway, but will keep road markings off the brick blocks, which were installed as part of the streetscape beautification project.

The mayor said the DOT also agreed to redo the street arrows and replace bicycle signs with road markings.

"I think we got a lot out of that meeting, and will benefit from it," Collesano said.

The Village Board voted to approve and submit a home rule request to the State Senate and Assembly enabling Ortt and Morinello to present their respective bills.

As it turns out, Village of Lewiston Mayor Terry Collesano was too modest in his update on the New York State Department of Transportation's plans to add crosswalk markers on Center Street.

Speaking at the Feb. 21 board meeting, Collesano explained he met with DOT representatives, and five crosswalk signs would be replaced.

Misunderstood last week was that Collesano meant a total of five new signs would line the historic road. Not the 54 neon signs originally pitched.

Apparently, the mayor is quite the negotiator.

Working alongside a member of New York State Sen. Rob Ortt's office, the mayor said he explained the village's historic character. He reminded DOT officials the state agency and the municipality worked together in 1994 on the Center Street streetscape. That project resulted in a narrowing of the roadways to make room for new curbing, brick walkways and other aesthetic improvements.

Moving forward, both sides will again work together.

Deputy Mayor Bruce Sutherland said, "It's almost a remove and replace all the way." He said the DOT will be "Updating what's there and replacing. ... There will be no signs where there are lights, but there will be new visibility paint at each crossing, on the cement part - not on the brick."

Collesano said, "The biggest thing is the (addition of pedestrian-crossing) striping on the streets. And I also talked them into putting the arrows on the turn lanes. And the bicycle signs that are on the streets, they're coming out, and they're going to put them on the roads."

Both Collesano and Sutherland said that, once the DOT reassessed the historic nature of the village, the conversation turned. Both parties sought to find ways to protect pedestrians while enhancing the roadway - and not detract from streetscape.

The Village of Lewiston has worked with the Lewiston Police Department in recent years to educate motorists on crosswalk safety. The two groups have partnered to remind residents that walking traffic has right of way at the brick and striped street markers: in front of the entrance to the Niagara Scenic Parkway (just past Tops); at the corners of Center and Eighth and Center and Seventh streets; adjacent to the Stone House, the Spicey Pickle and Apple Granny; and on the corner of Center and Water streets.

In addition, the Board of Trustees voted Feb. 21 to submit a home rule request to the State Senate and State Assembly enabling Ortt and Assemblyman Angelo Morinello to each present bills that, if approved, would lower the Center Street speed limit from 30 miles per hour to 25 miles per hour.