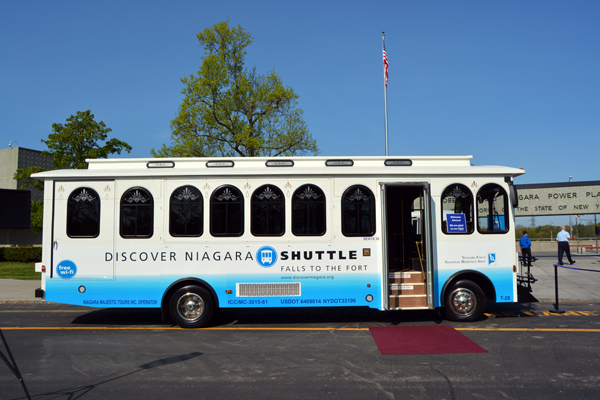 Shuttle to launch in May, add new stops

The Discover Niagara Shuttle is a go for 2017.

So reported Aaron Dey, operations manager for the Discover Niagara Shuttle, in remarks to the Youngstown Village Board of Trustees on Thursday. Dey appeared to offer a status update on the fledgling shuttle - a tourist offering in the Niagara region that's entering its second year.

"We launched it last year; it was a great success." Dey said. "The shuttle logged 33,000 riders in 2016 and that it was already benefiting area tourist stops."

"It has been a great, tremendous impact to communities along the lower Niagara region and also Niagara Falls itself."

"And we're launching again this year," he said, telling village trustees the shuttle will be starting up in May, with service to run from 9 a.m. to midnight on Fridays and Saturdays. The shuttle is expected to then switch to expanded weekday service for the summer months, with hours still to be announced.

"We're having a couple of (new) stops in Niagara Falls, and we want to be able to have people come down to places, such as Youngstown, and enjoy the restaurants," Dey said.

Those new stops include the now-open Niagara Falls Train Station, the historic Oakwood Cemetery and the Third Street restaurant district in Niagara Falls, with stops on Pine Avenue.

"We took surveys at the end of the season," he said, which revealed a desire by riders for longer operating hours, particularly on Friday and Saturday nights. Dey said the Discover Niagara Shuttle would also be adjusting its operating hours to better serve Lewiston's festivals and tourist activities in the lower river region.

He said any added stops also require greater funding. Dey also mentioned such venues as nearby Sanger Farms, Olcott Beach, and even Canalside in downtown Buffalo as potential destinations in the future.

As a result, Discover Niagara remains in search of alternative funding sources. Officials from the group have been meeting with area elected officials in a search for additional funding. Thus far, Discover Niagara met with the City of Niagara Falls where it obtained a $100,000 funding commitment from the Dyster administration. It has also met with the Village of Lewiston and Thursday was seeking help from the Village of Youngstown. Dey said similar visits are planned with the Town of Lewiston and the Niagara County Legislature.

"We have a great season that we're planning. We're also opening up to businesses; we're monetizing our tourists," Dey said.

He explained this approach would enable businesses, through their financial support and association with Discover Niagara, to "be a part of the experience. You would be a partner."

Dey called the shuttle "a marketing machine" and said its on-board attractions of flat-screen TVs, Bluetooth and Wi-Fi capability for tourists and riders could be further utilized in the marketing of participating businesses, such as restaurants, etc.

Dey said Old Fort Niagara is the latest to join in, and a portion of its marketing monies are now going to be geared to the Discover Niagara Shuttle.

"Because they know what it does," he said.

Dey added State Parks is also a stakeholder, with Discover Niagara receiving a dollar from any Discovery Pass sold.

"We found that people came from Four Mile, parked their rigs and vehicles at Old Fort Niagara, experienced Old Fort Niagara, stopped in Youngstown, went to Niagara Falls and came back. It opens up an entire amount of commerce that wasn't there before," Dey said.

Mayor Raleigh Reynolds and village trustees were receptive and supportive to Dey's presentation. However, no funding was approved at the Thursday session. Discover Niagara was reportedly seeking approximately $4,700 in funding from the village.

In other news from the session...

•Village trustees approved a resolution, tabled earlier, that will now allow the annual Welcome to Summer Street Dance in June and other similar events to continue to be held on Youngstown's Main Street. The village had been considering moving all such events to Falkner Park, citing safety reasons.

"Stu Comerford and I hosted a meeting in the board room and there were 15 people who showed," Trustee Tim Adamson said. "There were five items that we covered."

Included was a discussion over the number of Youngstown Police officers who would be detailed for the event. Here the village agreed with YPD and the Youngstown Business and Professional Association - holders of the street dance on staffing. Nine to 10 YPD officers would be staffed depending on need and outside help from YBPA.

Other concerns involved placement of barricades, with Youngstown Fire Co. to position fire vehicles at either end of the Street Dance; relocating the bounce house; limiting the car show to Hinman Street only; and assigning of any additional EMTs for the event. Adamson said the fire company felt comfortable with its existing staffing and that it wasn't required.

"The meeting was very productive, constructive. Everyone got along well, and everyone agreed to these five items to modify the safety and enhance the security of the Street Dance," Adamson said.

He said the measure would apply for all street dance-type events that would be held on the village's Main Street.

•Trustees approved a request by the YBPA for the purchase of 17 new flower baskets for a total of $1,870, with the village and YBPA to split the cost.