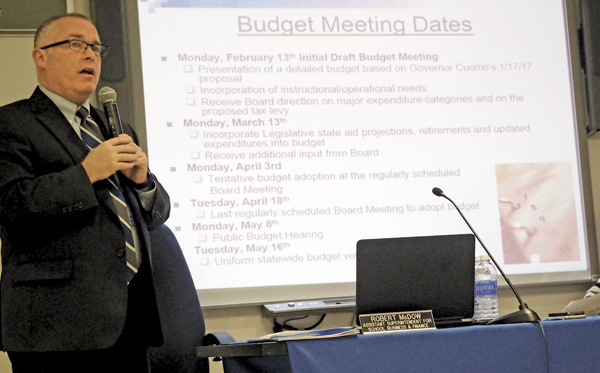 Superintendent of Schools Dr. Brian Graham begins a budget presentation to the Grand Island Board of Education. (Photo by Larry Austin)

In presenting the first draft of the 2017-18 budget to the Board of Education last Monday, Graham called "to continue with the community mandates. And that's really important. We talk a lot about state mandates, but the community mandates excellent student programs, and that's also built into our draft budget."

Graham and Assistant Superintendent of Finances Robert McDow spoke for over an hour on the budget so far. Work on the budget began in November to review the wants and needs from leaders in the district, and the Feb. 13 meeting was the first presentation of the draft. Another meeting on the budget will take place March 13.

Graham said there are several key budget goals: "Developing a budget that has long-term sustainability, that the budget is designed to continue to provide an excellent educational program for all of our students, universal pre-kindergarten students all the way up to grade 12."

The goals are embedded into the work of the budget so far, he said.

Graham said another budget goal is to protect the fund balance, adding that the state comptroller told the district it "is no longer susceptible to fiscal stress."

Graham said, "and this draft budget continues to protect that fund balance."

The district is hoping for an increase in Foundation Aid from the state. Gov. Andrew Cuomo's first draft of the state budget proposes a $1 billion increase in education aid for the state, but he wants to change the formula aid, which most school districts oppose, McDow said.

Graham said the governor's office presented budget information Jan. 17. He claimed the state's aid to schools is "underfunded, so we're hoping that by March 13 we'll have a better handle on what is coming out of the state" that will be incorporated into the district's next budget presentation.

McDow said current budget assumptions include salary increases of $990,000 if all positions hold to date, without assuming retirements, which are identified by the Grand Island Teachers Association March 1. The budget notes:

•Health care and worker's compensation are going up faster than average.