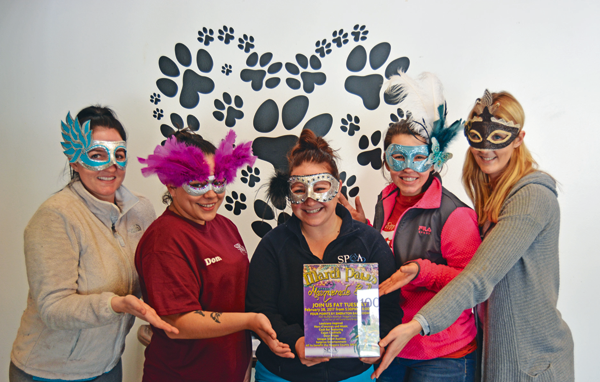 Tickets are $50. All of the funds generated from the event will support the Niagara County SPCA.

"We're hoping to make this our premier annual event," said Polla Milligan, director of marketing and development for the Niagara County SPCA.

She said the goal of the event is to reach out to a broader audience and, ultimately, support the shelter. Also, "We want to become known as a place that does do innovative fundraisers and innovative events ... so that people come to kind of know us as something that stands out a little bit from the rest of the crowd," she said.

"It gives people something really fun and exciting to do because it's winter. ... It's cold and gray and this is a very colorful event - just the spicy food alone is going to heat you up," Milligan added.

She explained the staff at Four Points by Sheraton Niagara Falls will prepare special menu items specifically for Mardi Paws, which will be held in the hotel's Upper Rapids Room.

Teresa Costello, director of sales at Four Points by Sheraton, Merani Hotel Group, said, "For the Mardi Paws event, our culinary team will prepare jambalaya, gumbo, and po'boy shrimp canapés along with other Creole and Cajun items."

She said, although these Louisiana-inspired offerings are not on the venue's standard menu, the hotel's chefs and culinary team "love the opportunity to branch out from the norm and really highlight their creativity."

The bartenders will also create some Cajun-style cocktails for the event's cash bar.

"We really are excited to be hosting this first annual event and want to do it up right in true New Orleans style," Costello said. "And who wouldn't want to support puppies and kitties and all of the other little guys that the fine people of the SPCA take care of? We are hoping for a great turnout."

Performances by illusionist Don Rogers and the Backwoods Cloggers will take place at the event, as well. Music and a dance floor will also be part of the event. Erica Brecher of WGRZ-TV Channel 2 will serve as the master of ceremonies.

A silent auction will offer various items, including a tandem bicycle, a signed Buffalo Sabres hockey stick by Zemgus Girgensons, a two-night stay with breakfast and dinner at the newly opened DoubleTree by Hilton Hotel Niagara Falls, ice cream for a year from Anderson's Frozen Custard, a wine rack full of wine, a six-disc flying lessons package, an antique tea set, jewelry, a basket of Louisiana hot sauces, and Louisiana beer. In addition, door prizes will be given out every half hour, and masks made by artists will be available for purchase.

"We decided to make it as extravagant and crazy and fun as possible so the people will walk out the door going, 'I can't wait until next year,'" Milligan said.

Organizers recommend visitors come in costume, however, it is not required. Participants must be 21 years of age or older.

For tickets, visit the Niagara County SPCA at 2100 Lockport Road or email Milligan at [email protected].

The event is dedicated to doctor of veterinary medicine Susan M. Persico.