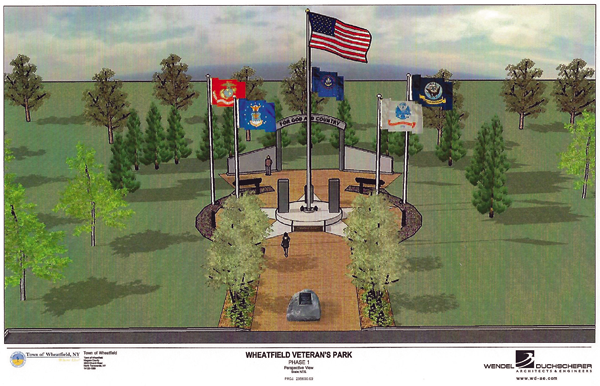 Shown is an artist's rendering of the veterans memorial planned for Wheatfield's Fairmount Park. (Image courtesy of Wendel)

Local volunteers are planning the construction of a veterans memorial for Wheatfield's Fairmount Park where community members can honor those who have served.

The cost of the project, organized by the town's Veterans Memorial Focus Group, is expected to be around $500,000 to $550,000, said Richard Muscatello, chairman of the town's Comprehensive Implementation Task Force.

He said that, after the group receives an actual cost estimate, it can then begin fundraising for the project.

"This is going to be a community affair," Muscatello said. "And we're trying to identify the steps you take to have successful fundraising."

Along with this process, the group is also seeking a nonprofit certification.

He said local veterans groups "are anxious to be a part of this," as well.

Last month, Niagara County Legislator David E. Godfrey presented the group with a check for $2,000 to go toward project developments.

"The monument is the community's way of expressing gratitude for those who have given time and effort and, maybe in some cases, their lives to protect what we take for granted, which is our freedom," Muscatello said.

So far, an artist's rendition and engineering and architectural drawings for the project have been completed.

The project is expected to include a five-point star made from concrete. At the center of the star will be an elevated, circular platform to accommodate a podium, which would have lights and an audio system. Small monuments would also be placed in the circle. In its center will be a flagpole with an American flag.

Additional flags, one for each of the five branches of the military, will be flown at each point of the star.

The memorial is slated to be built near the pond at Fairmount Park, and "There will be steps going down to the lake with benches around, for those who feel they want to take a moment of silence, recognition or prayer," Muscatello said.

Project facilitator Edward Sturgeon said the memorial "will be a place for veterans and their families to go for contemplation, mediation and reflection, 24/7, similar to the Vietnam Memorial in Washington, D.C. Here, veterans and their families will have a place to reconnect with their past and bring about a healing type of catharsis they cannot find elsewhere. For many families, memories of the veteran are all they had to cling to, and this will provide a place for families to go to and reflect on those who served our country."

The memorial would also serve as the town's new location for its Memorial Day and Veterans Day ceremonies, as well as other private services honoring fallen veterans.

"The new memorial will honor all veterans in each branch of the service in all the wars and conflicts," Sturgeon said. "This will include the Coast Guard."

The helicopter, armored tank and some of the stones from the town's current memorial may be transferred to the new memorial at Fairmount Park, Sturgeon said.

Those interested in serving on the Wheatfield Veterans Memorial Focus Group or the veterans memorial fundraising committee can contact Sturgeon at [email protected].