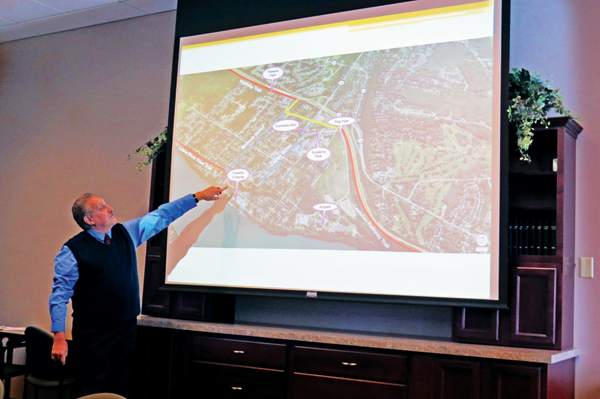 On Tuesday, the Niagara River Greenway Host Communities Standing Committee unanimously approved a request for funding from the Town of Lewiston to complete the Mohawk Trail. The municipality will receive $13,958 for the project, which is expected to commence in 2018.

"Basically, our Lewiston pathway comes down the escarpment, and it will end at Ninth Street and Seneca, which is the Artpark exit that they use on their Tuesday nights and Wednesday nights (for concert traffic)," Rotella said. "Our Mohawk Trail will start at that point. It'll be an on-street trail. Go down Ninth Street, which will then cross Academy Park. Cross Center Street. And at this point, we're going to have some signage saying where they (pedestrian travelers) are. And then that'll go all the way to Mohawk Street. We'll have another series of signs at that point, showing (people can) go either up to the Parkway Trail, or down to River Road Trail, which will take (them) down to Fort Niagara and Lake Ontario."

Presently, there is a sidewalk on the east side of South Ninth Street, running parallel to the Tops parking lot. Shoulders exist on both sides of North Ninth Street, as one goes down the hill toward Mohawk Street.

On Mohawk Street, a sidewalk exists from the Parkway Trail and the parkway overpass to North Eighth Street, and then again from Mohawk and North Fourth streets to North Second Street and the foot of Lower River Road and the River Road Trail.

The Mohawk Trail funding application states, "The (new) trail will extend within existing village right-of-ways on Ninth Street and Mohawk Street" at a cost of $96,250.

The Town of Lewiston previously received $82,292 in DOT funding.

In 2005, Congresswoman Louise Slaughter secured a $1.84 million grant for a Lewiston pathway. The funding was part of a U.S. Department of Transportation Federal Highway Administration bill titled the Safe, Accountable, Flexible, Efficient Transportation Equity Act: A Legacy for Users.

Rotella said this money was set aside for project design and construction.

"The original location, which was on the east side of Lewiston Road, did not really give us the vistas of the west side," Rotella said after the HCSC meeting. "So, we ended up changing the location of the trail to the west side of the Robert Moses Parkway (now the Niagara Scenic Parkway) going down the hill. It's going to be constructed on the grass. So, it will be a standalone project. It won't interfere with the Robert Moses Parkway at all.

"We have completed design, as of last week, and the project is going to be turned over to the New York State Department of Transportation for construction. They anticipate to start that (project) end of the year, beginning of next. Probably next year. ... We'll be transferring that grant from Louise Slaughter to DOT."

Rotella told committee members the completed Mohawk Trail would place people in close proximity to other cultural and historic attractions in Lewiston, including the Tuscarora Heroes and Freedom Crossing monuments.

"Realistically, it's going to be in the heart of so many (previous) Greenway projects that we have been awarded to get those things done," he said. "This little connecting trail is perfectly located."

The HCSC is one of four standing committees distributing funds for Niagara River Greenway Commission projects. As such, plans receiving money should be in keeping with the Greenway Plan, which has a goal of converting the area along the Niagara River into a "world-class corridor of places, parks and landscapes that celebrate and interpret our unique, natural, cultural, recreational, scenic and heritage resources, and provides access to and connections between these important resources, while giving rise to economic opportunities for the region."

The Greenway Commission voted the Mohawk Trail consistent during its meeting on Jan. 17. Prior to the vote this week, committee counsel Stan Widger informed the HCSC, "The project meets procedural criteria for approval."

On Thursday, Mayor Terry Collesano said the Mohawk Trail is a good project - "We've been waiting for the state and the town to do their section, so we could tie into it" - but he noted, "Economically, the impact on the village, who knows at this point? I don't know if it's going to be used that much. If it's used a lot, yeah, obviously they're going to be coming into the village. And hopefully they'll be starving, hungry, and they'll go to our restaurants; be thirsty, and go to our taverns."

"There again, too, coming into the village, if they see our village, and like what they see - which, obviously, they will - then, hopefully they'll come back. Maybe bring their family back. So, I think it's going to help."

In 2007, the New York Power Authority was given a new, 50-year federal license to operate the Niagara Power Project. As part of the deal, NYPA agreed to provide $450 million over 50 years to fund Niagara River Greenway Commission-endorsed proposals.

Lewiston projects receive funding through the Host Communities Standing Committee (HCSC), whose members include NYPA and the Niagara Power Coalition (Niagara Falls; towns of Niagara and Lewiston; Niagara County; and the Niagara-Wheatfield, Niagara Falls and Lewiston-Porter school districts). This board annually receives $3 million.