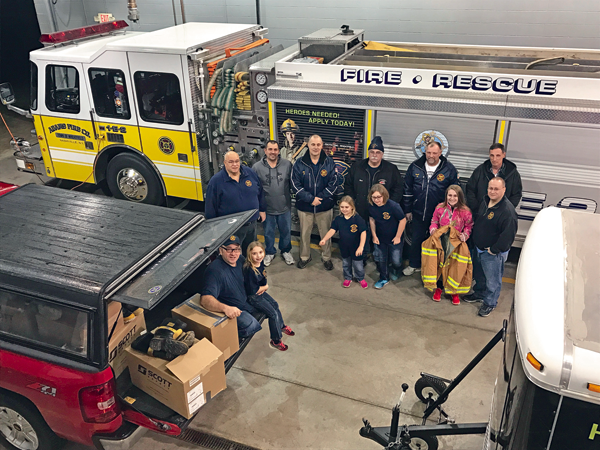 Wheatfield firefighters and family members pose for a photo at Adams Fire Co. after packing donations.

After an eye-opening visit to rural Tennessee, a group of Wheatfield volunteer firefighters are spreading the word on how local companies can put their retired equipment toward a good cause.

Last fall, a group of Wheatfield firefighters visited the mountainous city of Pigeon Forge. While there, they had an opportunity to have dinner with a few fellow firefighters from the area.

One of the Tennessee firefighters was Matt Lovitt, a career firefighter of Pigeon Forge, who told them he was in the process of starting a nonprofit organization. Through Firefighters Friend, fire companies can donate equipment that they are no longer using to other community fire departments in need throughout rural Tennessee areas.

He shared stories about the lack of usable equipment available to local, volunteer firefighters.

Moved by the conversation, Michael DiPasquale, past president of Adams Fire Co., along with the group of Wheatfield firefighters, decided to work on building a New York chapter of Firefighters Friend.

So far, Adams Fire Co. has donated an assortment of equipment and gear, including air packs, turnout gear, helmets, masks and boots. DiPasquale said more gear will be available to donate soon, as the company has recently been awarded a grant for more updated equipment.

St. Johnsburg Fire Co. is also in the process of gathering a list of items it can donate.

"The word's getting out up here that there's companies down there that desperately need stuff," DiPasquale said, adding the need for hoses is particularly great.

He is planning to make a presentation at the upcoming Niagara Country Fire Chief's Association meeting about the cause, in hopes more companies will want to get involved.

"This all just sort of developed overnight, literally over steaks and baked potatoes," Lovitt said. "We were sitting, talking, and we were like - this is what we're going to do."

To get the ball rolling, DiPasquale made a trip to Tennessee earlier this month to deliver donations and get an inside look at some of the local fire companies.

"It was really an eye-opener," DiPasquale said.

"It was really disheartening to see some of the places down there. You think you have it tough when you have to fundraise here in New York, but down there it's a whole different ball of wax. It's more rural. There are laws, they're 501(c)(3), but they can't do any games of chance. So they can't do bingo, they can't do raffles, they can't do any of that stuff. They have other ways they raise money, but it's not like up here."

DiPasquale said he hopes firefighters from other Western New York companies will make a trip to Tennessee and deliver equipment and see firsthand how great the need is.

The communities are very rural, with small populations to support their local fire companies via donations.

"Unfortunately, not all of the world is set up like New York state," Lovitt said. "They're a lot of areas throughout the nation that do not have tax-based fire service. They truly do work off of just donations in their communities. So, if you get a community or municipality that only has 10,000 residents in it, and you need $30,000 to $40,000 a year to operate a small department, all that money has to come from that small group of people."

The side effect of this setup is that companies are unable to obtain updated equipment, DiPasquale said.

He explained there are standards in New York that must be met for equipment and "Once that equipment reaches its lifespan here in New York, you can't use it. But down in the south, they don't follow those guidelines as closely, because they don't have the money to purchase the brand-new stuff. So if the equipment's in good working shape and it still can be used, they'll take it. And they'll put it to good use."

And even if the technology is outdated for New York's standards, it is still much more advanced than what firefighters are working with in Tennessee, Lovitt said.

"A 25 year old piece of fire apparatus in New York state could still last another 15 to 20 years here in one of these smaller departments, where the call volume is not as significant as it would be in the north," he said.

In all, Lovitt said his No. 1 goal for Firefighters Friend is to increase firefighter safety.

"Whether it's personal protective equipment or a hose or tools, all of those things make a huge different in firefighter's safety in the long run," he said.

He added, "If I can limit myself from seeing one of my friends either injured or die in a fire or a fire-related incident, I'm going to do everything I can to stop that from happening." 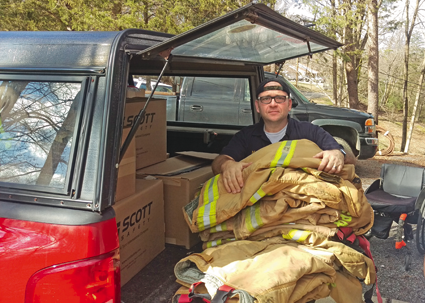 Michael DiPasquale of Adams Fire Co. loads up a vehicle with used firefighter gear for companies in need in rural Tennessee.

Although Adams Fire Co. and St. Johnsburg Fire Co. have just recently begun working on a New York chapter of Firefighters Friends, Wheatfield-area fire companies have worked with Matt Lovitt over the past few years to donate used equipment.

Companies that have made donations include Bergholz Fire Co., Shawnee Fire Co. and Sanborn Fire Co.

Both Shawnee and Sanborn fire companies were able to donate fire trucks.

Lovitt said the truck donated by the Sanborn Fire Co. replaced a 1976 model, which still operated with a gas burner and hydraulic breaks.

The one from Shawnee was from the 1980s. The company could not sell it for three or four years, so firefighters decided to donate it.