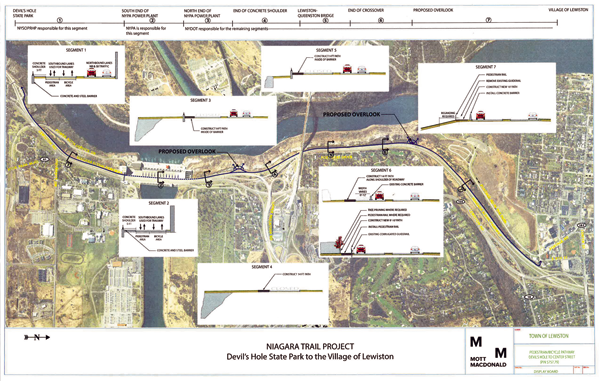 The Mott MacDonald diagram notes many design variations found in the Niagara Trail project. Click to enlarge, or download a copy in the story text.

It's been a long time in progress, but, in coming years, if all goes as planned, local residents and visitors will be able to experience the scenic beauty of the Niagara River gorge like never before.

"I'm happy to present the preliminary design plan for the Lewiston pathway," Town of Lewiston grant writer Bernie Rotella of Rotella Grant Management told the Town Board on Monday. The project is 13 years in the making.

Rotella said the Niagara Trail Project has cleared yet another hurdle of "major complications" involving right-of-ways addressed along the 1.8-mile project. Once complete, the pathway will run along the top of the river gorge from Devils Hole State Park to the South Ninth Street entrance to Artpark in the Village of Lewiston. Rotella said it would provide yet another transit link in the developing, 37-mile Niagara River corridor stretching from downtown Buffalo north to Lake Ontario.

"This is going to be one of the best majestic views in New York state," said Rotella, who called it "a fantastic project" once it's ultimately completed.

Project Engineer Jeff Lepsak of Mott MacDonald engineering consultants detailed the seven design segments contained in the estimated $2.3-million project. The construction cost has been and continues to be handled by various federal and state funding sources, and is not expected to impact Lewiston at all.

"This has been a complicated project with a lot of players and a lot of things that have happened over the period," Lepsak said.

He spoke of the numerous issues involving right-of-ways under ownership of various entities, including the New York Power Authority, the New York State Department of Transportation, New York State Office of Parks, Recreation and Historic Preservation, and the Town of Lewiston.

Lepsak said the preliminary design concept called for using the existing nonused southbound lanes of the Niagara Scenic Parkway, and also areas of the escarpment.

"That was the initial plan. In 2009 and in 2010, there was a change of heart (by Lewiston), and we switched the plan to the other side of the road, which led to some major right-of-way complications," he said. "The biggest problem with this project is that the Town of Lewiston received the grant to design and build the trail. But the town had no ownership of any of the land for the trail. That has been one of our ongoing challenges."

He said that, with moving the trail to the east side of the Niagara Scenic Parkway, designers ran into "25 separate parcels. And it was a very complicated right-of-way. (Then) there was the issue of crossing over the parkway."

He said all the state agencies - NYPA, State Parks and DOT - were involved in owning property along the corridor. "We kept meeting, figuring out what to do. Finally, in January of 2015, the state took the lead.

"The state had a different approach, which was the pathway totally off of the roadway" due to the uncertain future of the parkway. "So (this) plan ... shows how the trail will be built with a variety of methods."

Lepsak said the latest trail design involves the aforementioned seven different segments and takes the parkway out of any consideration in its design.

Describing the plan, Lepsak said that, from Devils Hole to the NYPA dam, the pathway would be built on unused lanes under the jurisdiction of State Parks, and completed by that agency. It will feature a 25-foot-wide pedestrian and bicycle area.

At the Power Authority dam area, the 25-foot-wide area would continue across the hydropower dam and proceed north, where it would transfer to DOT control. Here, the trail relocates and adjusts in width to 9 feet. It straddles an unused roadway along the parkway.

In Segment 4, the pathway expands in width to 14 feet and continues alongside the roadway.

"That is the long piece from between the dam and the Lewiston-Queenston Bridge," Lepsak said. "What we are proposing is a 14-foot pathway next to the roadway."

Lepsak noted that, at this point, the pathway would again shrink in width to around 9 feet.

"There are different options to get the path through there," Lepsak said. He explained both structural and natural elements, which designers will have to deal with, were found in that area.

The pathway would then continue downhill along a green area on the northern side of the parkway from the top of the escarpment area down to Artpark. Lepsak said the pathway would be 10-12 feet wide at this point and feature a gentle slope downhill.

"For that, we are proposing putting up ... a single-slope concrete barrier" adjacent to the southbound lanes, Lepsak said. Included would be barriers and a 12-foot-wide pathway with pedestrian railings due to the slope. "That is one of the more engineered parts of the trail."

Noting the spectacular views provided in the plan, Lepsak said it would also feature two overlook areas to the gorge - one north of the NYPA dam and another further north at the crest of the escarpment.

"We are proposing two overlooks: one that would be between the dam and the Lewiston-Queenston Bridge," he said. "The second overlook, a smaller one, would be at the top of the escarpment" located near what is currently an abandoned transformer structure owned by State Parks.

"This design has been very carefully vetted by DOT ... to try to identify all the obstacles," Lepsak said. "There have been a lot of rule changes since we started in 2009. Design approval is imminent. Once we have design approval, DOT can proceed with the right-of-way negotiations with the Power Authority, and the project can be put out to bid" by 2018.

Lewiston Town Board members responded favorably to the plan, with Supervisor Steve Broderick and members noting the unique views and the pathway's appeal to both residents and tourists.

"This is a perfect Greenway project," Broderick said.

The plan calls for the state to handle all of the project's funding and construction costs, with the Town of Lewiston expected to assume all maintenance once the project is completed.

Town Highway Superintendent Dave Trane said the Highway Department would ultimately be involved in the maintenance aspects. However, little discussion was heard by Broderick or Town Board members regarding the added cost to the town.