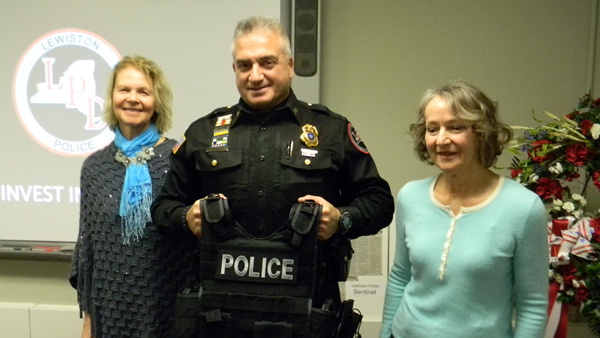 Lewiston Police Chief Frank Previte stands with Village of Lewiston residents Claudia Marasco (left) and Arlene Sliz as he announced successful completion of the "Invest in a Vest" fundraiser on Tuesday. The two women organized the campaign last year with the purpose of outfitting the LPD with new, special-use vests. (Photo by Terry Duffy)

On Tuesday, the Lewiston Police Department recognized the efforts of two special women who went that extra mile over past months in their concern for the men and women of law enforcement who serve the Lewiston community.

"It's a celebration today," said Police Chief Frank Previte as he introduced Lewiston residents Claudia Marasco and Arlene Sliz to a host of local media gathered at the LPD Creek Road office.

Previte said that, through their efforts, a successful community fundraising campaign called "Invest in a Vest" was realized, with nearly $25,000 in donations collected in the greater Lewiston community. As a result, the Lewiston Police Department will now be able to outfit its 22 full- and part-time officers, plus LPD K-9 Taser, with much-needed specialized upper body armor. The new equipment was sought to better protect the officers in the event of shooting incidents involving high-profile weaponry.

"We have reached and exceeded our goal for the 'Invest in a Vest' program," Previte said as he discussed the successful community fundraising endeavor and its sole purpose of helping protect Lewiston officers. It was inspired by the two women last July following the tragic spate of shooting incidents against police nationwide.

"When the shootings became very prevalent throughout the country, it was very, very bothersome to me," Sliz said. "I just didn't know what to think. (I was wondering) is there any way we can help? My first question was what does our police department have to protect them?"

Previte recalled the discussions at a Village of Lewiston Board of Trustees session that led to the fundraising campaign.

"Shortly after the Dallas Police incident, the tragedy where officers were ambushed and attacked, and tragically lost their lives ... the mayor intervened (during my report) and conveyed his support for the department in light of everything that was going on. Just to let us know that they're behind us. That's the kind of tight community that we have here," Previte said. "During that period, a question was posed ... to see if the police department had everything we need in light of the current climate. As we know, things really haven't gotten any better; things have gotten worse or stayed about the same."

Previte went on to tell reporters the story of what he calls "a great testament to the community we have here in Lewiston."

At the session, Marasco asked, "Do the police have what (they) need?"

Previte replied that, yes, the department is taken care of, with adequate funding provided by both the Town and Village of Lewiston.

But there are always needs.

"Some of the weapons that are used are not usually handguns, regular guns, they're more like assault-type rifles, and my concern was for the safety of the officers.

"Well, she took that to heart. And from that day on, with her partner Arlene, they started working to solve that problem, for us."

Marasco recalled that meeting and the work in the weeks and months that followed.

"I asked the chief, 'Do you have any vests?' The room went silent; you could hear a pin drop, because people were not used to that type of question," she said. "Then the conversation was open. (And we found out). After the meeting, I went up to him and said, 'I got it. It's called "Invest in a Vest." We'll get started and everything will go pretty quickly.' "

Following a cover story in the July 23 Sentinel, "Invest in a Vest" started to take off.

"In the first week, we had almost $3,000," Marasco said. "And the story just progressed on its own. And we did it the old-fashioned way. In our old, little, quaint, old-fashioned village."

She told of assistance with the Village of Lewiston Clerk's Office to establish a dedicated funding account in the village budget, solely for the Lewiston Police, to accept and monitor donations.

"No penny would be given for overhead fees, a GoFundMe Page, whatever," Marasco said.

Soon after, other local print and broadcast media joined in the campaign. And donations from the community continued to come in.

"Every penny we collected came from the public," Marasco said. "This story just continued; people continued to give. And there have been more than 150 people who have contributed to the cause, some of them anonymously."

Marasco said one donor who wished to remain anonymous went so far as to visit Stuart's Sports, a Lewiston sporting goods retailer, and ordered T-shirts printed for anyone who gave $100 or more.

"As the story went on, more and more people, private citizens, embraced this project with a heart-felt response," Marasco said, as she recalled actually delivering the T-shirts to the local donors. "They started hugging us, they were so happy to be able to be involved in this project, and some of them came from backgrounds where they had police family, and then giving a donation, then we connected."

"We never wanted to be the community that said, 'We never thought it would happen here,' " Marasco said. "We've had just the greatest response. It's been an exiting project. We're very fortunate. When you live in a jewel of a community, there will always be those who want to take from you. But we have our plan in place. We are ready. And those kids in school are better protected."

Previte said the "Invest in Vest" campaign, which had an initial goal of $20,000, went on to raise nearly $25,000 - and contributions are still coming in.

"The point is you always hope it won't happen where you are, but you can never think that it won't," he said. "You have to prepare for the worst and pray for the best. ...

"Through these ladies' efforts, we have been able to close a little bit of a gap. We ask our officers to go into all kinds of situations. (But) if we have some kind of active shooter response now, the officers no longer wait for a SWAT team or somebody else to respond.

"Those officers, even if it's only one or two of them, go into to those buildings. I want to try to make sure that they return out of those buildings and back home to their families. And this is an integral part of that. And these ladies have done a fantastic job in helping us provide that.

"I just can't thank these ladies enough. I don't know of two better ladies to have on my side."

"It's really great to have a community such as ours. We have volunteers who step up to the plate," he said. "They're not new to us. Claudia and Arlene have been involved in many, many projects over the years. They're always there, relentlessly, step forward, and do it when it's needed. We love Lewiston, but most of all we love the LPD."

Town of Lewiston Supervisor Steve Broderick spoke of what the efforts of Marasco and Sliz mean to LPD's rank-and-file officers.

"I'm in law enforcement myself, currently a supervisor with the Niagara County Sheriff's Department, and I know how important it is to wear a vest," he said. "When I started, you didn't always wear a vest. It was 26 years ago. You'd put it in the back seat of the car; now you always wear it.

"And it's really important to have vests. ... (In) a small police department like Lewiston, sometimes finances are tough, so for some people to raise $25,000 is incredible."

Broderick closed by announcing that, as a result of the two women's actions, the Town of Lewiston will honor Marasco and Sliz as its Citizens of the Year at the Niagara River Region Chamber of Commerce Awards Gala, this April at the Conference & Event Center Niagara Falls.

"I really appreciate everything you have done," Broderick said to the women.