Jerge and Paladino were accompanied by engineer Christopher Wood, a partner with Carmina Wood Morris; and lawyer Peter Sorgi, an attorney with Hopkins Sorgi & Romanowski. With neighboring projects, they've both retained the same Buffalo-based service providers. Wood and Sorgi did most of the talking.

Jerge's proposal earned six variances from the Zoning Board of Appeals last October. His plan moved forward this week with only a slight modification: A Dumpster will be located in place of one southeast corner parking spot.

That decision was made following multiple conversations within the Morgan Lewis Village Boardroom. Building Inspector Ken Candella, Engineer Mike Marino, Mayor Terry Collesano and trustees Bruce Sutherland, Vic Eydt and Nick Conde all were in attendance and offered suggestions to Wood, who bounced back and forth between groups.

Jerge's proposal calls for the construction of a three-story, 24-unit (12 one-bedroom, 12 two-bedroom), high-end residential building on Onondaga Street, and six connected, single-story, two-bedroom patio homes on Fairchild Place. The exterior colors are set to be complementary brown and sandstone beige, with white and green stone trimming.

A row of large trees will divide the two sides.

All of Jerge's units will be available for rent and, he said, at a market-rate price.

"I like what he's got," Planning Board Vice Chairwoman Anne Welch said. "Very nice."

The Planning Board's endorsement was contingent on engineering reviews.

"We're still crunching the numbers," Marino said. "We'll be in communication with Chris if we need to tweak any pipe sizes."

Jerge will now seek final State Environmental Quality Review and project approval from the Village of Lewiston Board of Trustees.

Editor's note: Though the Planning Board told Jerge he would be on the Village Board's agenda next week, that is not the case.

An hour after the Sentinel went to press on Friday, the Village of Lewiston released its agenda for Tuesday's meeting. Trustees will not vote on the Fairchild project. Rather, they will schedule a public hearing for a special use permit allowing eight parking spaces in the village right-of-way on Onondaga Street adjacent to the project, as well as a public hearing on the project's merits.

The Zoning Board of Appeals granted Jerge a variance for parking spaces, allowing his project to proceed with 44 instead of the requisite 60. The eight parking spaces in front of the apartment complex would not count toward Jerge's total, likely would not be tied to the project (instead serving as public parking), and would continue the existing practice of parking in this particular village right-of-way.

Upon proposal acceptance, Jerge said he would meet with Candella to make plans to demolish the former Fairchild Manor nursing home that presently borders Fairchild Place and Onondaga Street.

"Sooner than later, I'm going to come and see Kenny and get a permit. I've got to get that building down," Jerge said. He added, "The kids are just (hanging out on site). It's been a disaster. I get called every week. ... Everything's going."

Jerge received a round of applause from several people in attendance as he left the boardroom. 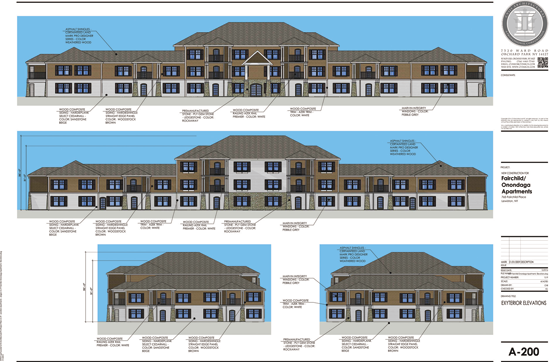 Pictured is an artist's rendering of the apartment complex proposed for Onondaga Street. (Image courtesy of Carmina Wood Morris)

Meanwhile, Paladino presented the Planning Board with a variety of complementary earth tones for his three plaza buildings, which will be constructed on 4.1 acres of property on Center, North Eighth and Onondaga streets.

"There's tans and browns and a green, and stone," Planning Board Chairman Norm Machelor said.

"Building two has the stone, and the other (building one) has some brick," Welch said. "And there's brick on the building behind (No. 3)."

"All three buildings are different," Machelor said, though Welch reiterated, "They will all complement each other."

"I think, for most of the buildings, you're looking at four different shades (of brown) going into different features of each of the buildings," board member Claudia Marasco said. She added, "It's like, on a color wheel, almost like analogous colors that are next to each other, but differentiate."

"We didn't want it to look like one big complex," Welch said. "We wanted it broken up, like the buildings on Center Street are all different colors. We wanted to keep that theme."

Paladino will seek final exterior design approval from the Board of Trustees at the 6 p.m. municipal meeting on Tuesday.

The plaza is expected to offer two or three places to eat, as well as a variety of retail stores. The northernmost building will have an upper floor of living units.

Paladino said, "I'd like to start clearing (the property) in the next 30 days."

The Center Street portion of his company's property now has three empty buildings (which formerly housed The Country Doctor, Grandpaws Pet Emporium and Smith Brothers Pizza), while the North Eighth and Onondaga street portions are largely a shrub forest.

The Planning Board also approved an exterior change for 442-446 Center St., which is the building in between the Frontier House parking lot and The Brickyard properties. The site's exterior will be flatter, resembling something more in keeping with its past use as a firehall.

At past meetings, it was said building owner Herbert Richardson is looking for a tenant or tenants for the building. 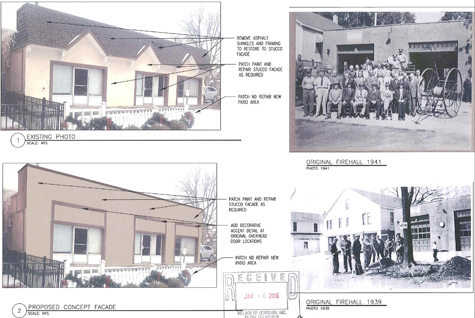 Pictured is an artist's rendering of 442-446 Center St., Lewiston -- clockwise is now, before and proposed. (Image by Fittante Architecture)