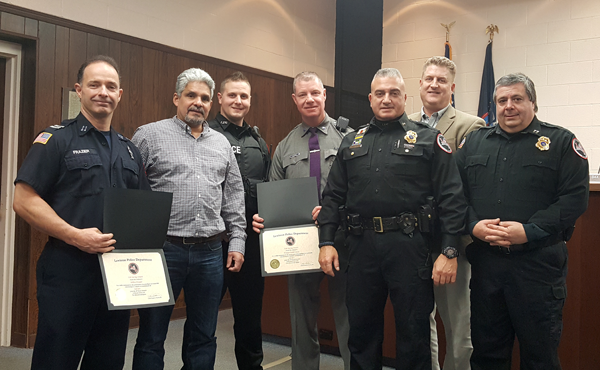 The Town of Lewiston closed down 2016 with routine approvals to its final audit, recognizing the efforts of area law enforcement, and receiving some very favorable news on the Lewiston Family Ice Rink.

Parks and Recreation Director Michael Dashineau reported the community sponsorship campaign, launched earlier as the town was considering cancelling rink operations altogether this holiday season, had reached expectations. An $18,000 sponsorship goal was achieved and a total revenue goal in excess of $20,000 was expected as soon as early January.

Crediting the sponsors, Dashineau presented an acceptance of sponsorship for board approval, "With appreciation to Lewiston businesses and families, who have bought sponsorships for the rink in an effort to demonstrate to us the importance of the ice rink to the community. As outlined in our pre-project budget, we have reached our sponsorship goal of $18,000 and will reach our operations revenue goal by the end of this weekend."

With that, Dashineau revealed a list of the contributors who, by their pledges, have helped make the Lewiston Family Ice rink a reality. These include:

Dashineau said that, as a result, the Family Ice Rink now has funding intact to remain open for a full season, as he sought Town Board approval. Earlier projections envisioned a closing date of Sunday, Jan. 8. But Dashineau said Thursday the Rec. Department now is fully capable of keeping the rink open as it has been in previous years, and requested board approval for a Jan. 22 closing date.

The rink's staffing is fully funded; its power cost is covered via New York Power Authority allocation money; and Greenway funding will fully cover rental of the chiller unit and other rink expenses until Jan. 22.

Further, Dashineau argued that, since the town has already received "a huge commitment" from the community, sticking to the Jan. 8 initial closing date would not be fair.

Town Supervisor Steve Broderick called the rink's funding endeavor "a huge success." He, along with councilmen Bill Geiben and Al Bax, supported the move to keep the rink open longer, while Councilman Rob Morreale suggested it would be better to carry over funding for next year.

Soon after, board members signed off on keeping the rink open for the full season to Jan. 22.

Dashineau invited parents and children to stop by Saturday for the annual kids New Year's Eve celebrations at the rink. He said the kids ball drop party will get underway at 6 p.m., with countdown and balloons to come at 8 p.m.

"It will work out perfect for any parents who want to get out later," he said.

•Lewiston Police Chief Frank Previte opened the meeting with the presentation of citations to area law enforcement and members of the Niagara County DA's office.

First responders, including Lewiston Police, the State Police and a Niagara Falls City firefighter EMT, were all cited for their swift actions in working to save the life of retired State Trooper Ricardo Flores in the fall of 2015 after he had fallen victim to a bee sting incident and experienced a near-fatal reaction.

And members of the Niagara County DA's office and State Police investigators were honored for their expertise and diligence in working with the Lewiston Police as the tragedies of the Iver Phalen sexual abuse case were first unearthed in 2014.

"The efforts of these professionals cannot go unrecognized," Previte said as he presented the citations to applause by Town Hall visitors.

•The town announced attorney Brian Seaman would be leaving in 2017 to assume similar duties with the Town of Lockport. A new town attorney will be appointed next month to join attorney A. Joseph Catalano.

Seaman was expected to continue in a limited role with the town on various legal matters. His replacement has not yet been named.

The town board will meet for its reorganization at 6 p.m. Monday, Jan. 9, at Town Hall.