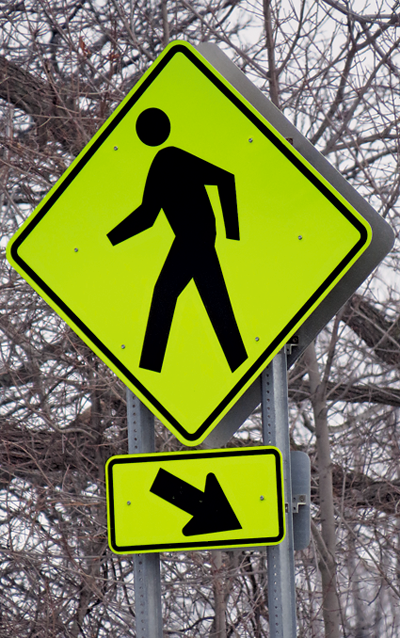 Trustees in the Village of Lewiston oppose the addition of signs, like the one pictured, along Center Street.

Faced with the prospect of 50-plus new, neon signs littering Center Street, trustees in the Village of Lewiston are looking into taking control of the roadway from the state of New York.

"We are opposed to it; very much opposed to it," Collesano said of the signage during Monday night's monthly board meeting.

Trustees approved a resolution that read, in part, "Over the years, the village has spent millions of dollars on its streetscape program in a successful effort to reduce the number of street signs and enhance its historical ambiance, which has attracted record numbers of visitors who partake in its cultural and artistic programs and festivals, and enjoy photographing the historical buildings and scenery."

Collesano said, "We don't know" how to take ownership of Center Street. "We got (counsel) Joe (Leone) looking into that right now."

Leone has worked with municipalities in transferring roadways, but never with the state.

"I suspect it would be simply a matter of the deed, by resolution - it would probably have to be a State Legislature resolution, I would think," he said. "It just came up this morning, so I haven't had occasion to research it."

Leone said, "It looks as though it's a directive, according to Messana, from the federal government, to the governor, to the DOT.

"I took a quick look today at the New York State Code of Rules and Regulations, and I wasn't able to find anything in there that mandates it at this point, but, as we discussed, it's a question of intentional liability."

A pedestrian was struck and killed while crossing Center Street in 2014.

"Before we do it, we're also looking at the insurance ... increases that it might cost us, if we take over," Sutherland said.

"There's other costs we'd have to look at here," Trustee Vic Eydt said.

In a July 12 letter to the Village Board, Messana wrote, "We have completed our review of the pedestrian crosswalks on Route 18F (Center Street) in the Village of Lewiston. ... As a result of our review, and in conjunction with the New York State Pedestrian Safety Plan, we have determined that we will replace all the existing pedestrian warning signs with new fluorescent yellow/green signs, as well as install a second fluorescent yellow/green pedestrian sign at each location for the left side of the roadway. We will also install advance pedestrian warning signs with a subpanel reading 'Ahead' for each location.

"For the mid-block crossing in the vicinity of the Apple Granny Restaurant, we will install signs indicating 'Yield Here To Pedestrians,' with the corresponding pavement markings for both eastbound and westbound Center Street traffic. We will also install high-visibility crosswalks at all crosswalk locations."

Brolinski said, "The way they have it laid out on their map is, if you stand at Fourth Street, before the first crosswalk in front of Apple Granny's, there's going to be three signs (with the same amount on the other side of the road). You're going to have two advanced-warning signs, then the pedestrian (crossing) sign itself. Then, from there to Niagara Street, you're going to have three more. And it's going to go all the way like that until, I believe, Eighth Street. But it's only at the crosswalks that do not have a signal."

"To me, it's sign pollution. It's overkill. Big time," Brolinski added. "Also, they want to mark the road ... that will probably just be white striping. But it will say 'Pedestrian Crossing' or (be) white crossed lines."

Collesano said the Lewiston Police Department has been diligent in educating the public on crosswalk safety, and partnered with local media (including the Sentinel) to bring rules of law and safety tips to the community. The mayor said motorists are becoming more aware of pedestrian right-of-way.

"The main thing was we still would like to reduce the speed," he said. "We feel that, if we reduce the speed (limit) from 30 to 25 miles per hour, that would probably help us immensely, as far as pedestrians on Center Street."

The problem is, the DOT "won't lower the speed limit," Collesano said. "They've done their studies. They say it doesn't warrant being lowered to 25."

As such, he said, the Village of Lewiston's options are to eliminate some crosswalks or add more stoplights - which do not require additional signage - but "That would be an extreme measure for us."

"I agree with this," Eydt said. "The signs are just, they're hideous. We've gone, since the beginning of time, without these signs. ... I love the idea of possibly taking over Center Street. Just as long as we can be able to maintain it ourselves."

"They're moving forward unless we can stop it, and this may be a way to stop things," Collesano said.

Trustees don't know when the signs would be scheduled for installation.

"It's statewide. And they have to enact it within a reasonable time, they said," Sutherland explained. "So, it might take up to two years, they said, but we don't know."

Crosswalks exist on Center Street from the entrance to the Niagara Scenic Parkway down to the corner of Water Street. New markers could be placed at the corners of Eighth and Seventh streets, and adjacent to the Stone House, the Spicey Pickle and Apple Granny. 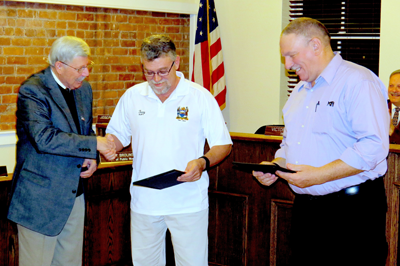 "We are happy to say that the state of New York, from the Conference of Mayors and Municipal Officials, are recognizing these two gentlemen, Mr. Brolinski and Mr. Crewe, who work with the Department of Public Works - our superintendent, and Bob has been a loyal employee for several years," Collesano said.

He added, "We are very thankful for their 25 years of loyal service and we hope that, hey, maybe you'll stick around another 25? What do you think?"

This comment was met with heads shaking "no," and laughter from those in attendance at the Village Board meeting. Brolinski and Crewe then received a round of applause.

'Invest in a Vest'

Lewiston Police Department Chief Frank Previte said the "Invest in a Vest" fundraising program had exceeded its $20,000 goal. The campaign was created to fund the outfitting of each officer with a new bulletproof vest.

"I'd like to once again thank (residents and fundraiser creators) Claudia Marasco and Arlene Sliz for their work that they did; it was something that got started right here in this room," Previte said. "I'm happy to report ... we're upwards of around $25,000 now. That's just a testament to the work that these two ladies have done, and their diligence to provide the vests."

Collesano asked, "In talking about the vests, I understand we also had one going for the dog. How's that one?"

Previte said, "That's correct. We raised enough money to cover all the officers and the dog," which, he noted, "seemed to be the biggest draw."

As trustees and attendees laughed, Previte noted, "Everybody wanted to make sure the dog was taken care of."

Previte said a formal announcement and more details would come early in 2017.